The Rare Book Collection of the East Asian Library at University of Chicago is known as “the Treasure Room” or “T-Room” since the collection contains a number of rare items, some of which are the sole surviving copies today. The collection includes Chinese, Japanese, and Korean rare books, as well as Buddhist Sutras. Besides CJK materials, also included are Manchu, Mongolian and Tibetan books. The scope of the collection includes works in all Northeastern Asian languages.

The collection consists of more than 500 titles of Yuan and Ming editions in some 15,000 volumes (both in printed and manuscript form), and about 500 editions dating from the early Qing Dynasty until 1795, in more than 7,000 volumes. Several of these volumes are not listed in the National Bibliography of the Qing Dynasty, and a number of titles are not in any current library collections in mainland China or Taiwan. All of these rare books have been examined and authenticated by experts in the field, including Peter Chang （昌彼得 1921—2011）of the Palace Museum in Taiwan, and Shen Jin (沈津) of the Shanghai Library / Harvard-Yenching Library.

Berthold Laufer (1874-1934) purchased several rare works, including a Ming edition of the Buddhist Tripitaka and the Collected Poems of Hang Huai (杭雙溪先生詩集), printed in the early 16th century with a seal of the Imperial Library in Manchu and Chinese characters and a handwritten postscript by the noted scholar Zhu Yizun 朱彝尊 (1629–1709), dated 1701. The Tripitaka, set in 6,361 chapters, is known as the Northern Edition of Buddhist Sutras (北藏), and consists of 7,929 volumes in 792 yellow silk brocade cases, dating from the 15th century. It was issued by the Imperial Court, with supplements dating from the 16th century. This collection in its entirety is very rare even in China. 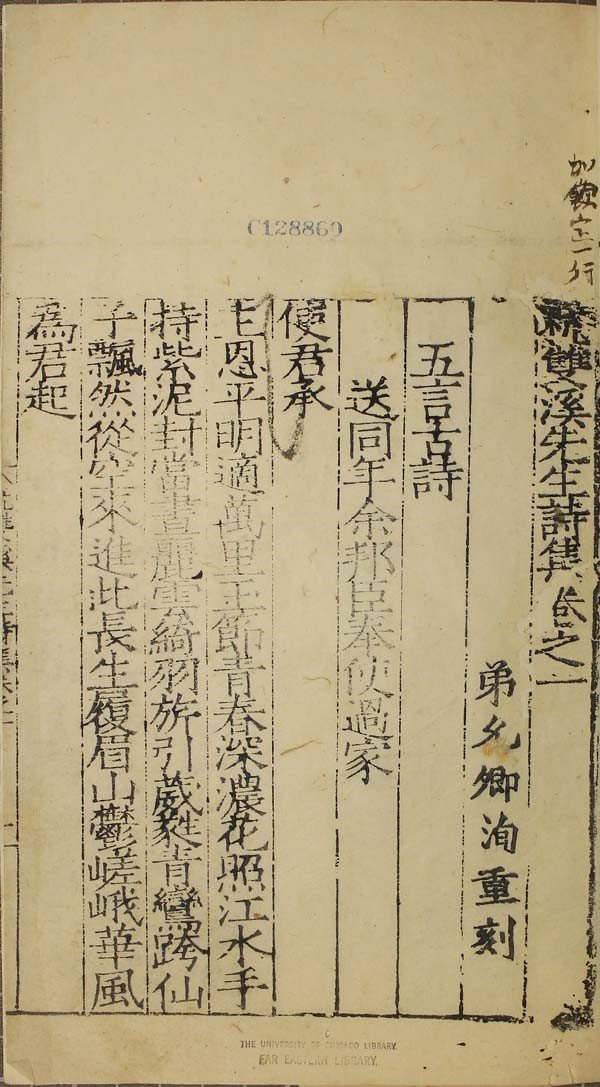 One of the major acquisitions was made by Professor T. H. Tsien, purchased from the private collection of the late Professor Li Zongtong 李宗侗 (Xuanbo 玄伯, 1895–1974) of Taiwan University. This collection numbers more than two hundred volumes of Ming editions, manuscripts, and drafts. In addition, the collection has 528 letters of personal correspondence between Pan Zuyin 潘祖蔭 (1834–1890), the Minister of Works, and Li Hongzao 李鴻藻 (1829–1897), the Minister of Personnel; 201 telegram drafts by Liang Dingfen 梁鼎芬 (1859–1919), Surveillance Commissioner of Hubei Province; manuscripts by Zhao Liewen 趙烈文 (1832–1893), prefect of Yizhou; and a poetry manuscript by Weng Tonghe 翁同龢 (1830–1904), tutor to the Tongzhi Emperor and Guangxu Emperor. 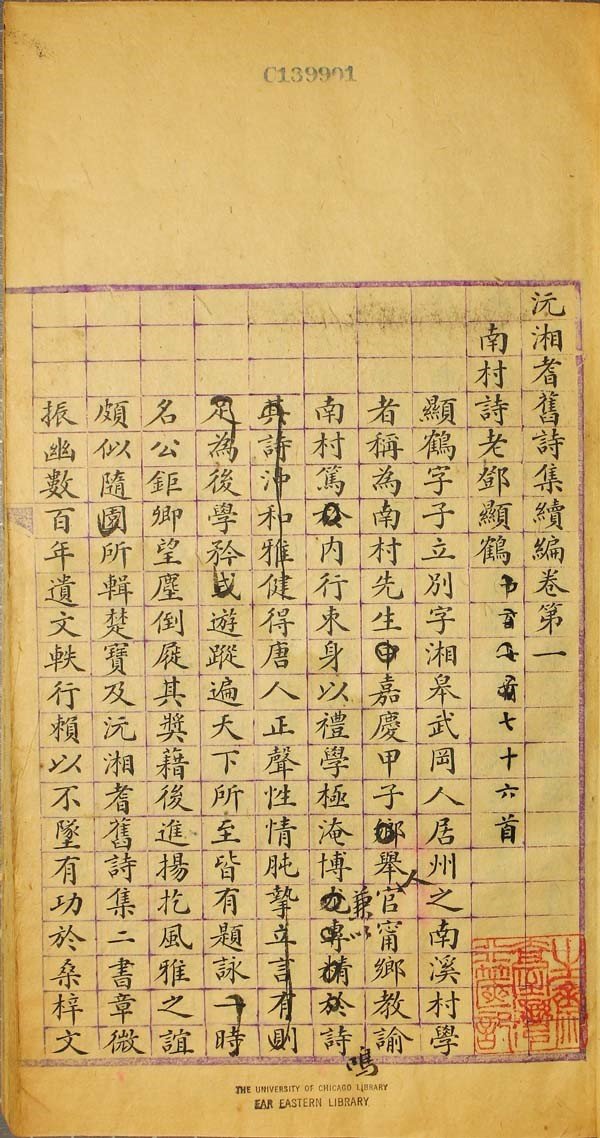 Among other important materials in the East Asian Library are the Hishi copies of rare Chinese books from collections in Japan.

Last but not least, the collection holds some examples of items relating to the early history of Chinese books and printing. For example, ten official sealing clays from the Han Dynasty, dating from around the beginning of the Christian era, were purchased by Professor Tsien from a private collector in Paris in 1968. The Buddhist Sutra printed in 956 by the Qian family and recovered from an old pagoda in Hangzhou is one of the earliest examples of printing; formerly owned by Kang Youwei 康有為 (1858–1927), it was acquired in Hong Kong. The three rolls of the Buddhist Sutra Lianhua jing 蓮華經, written in the 9th century and discovered in Dunhuang, were acquired in Taiwan.

The East Asian Library also owns some loose-leafs of a Song Dynasty printing; paper money printed in 1368; paper vouchers of the 19th century; and woodblocks used in printing the famous novel Dream of the Red Chamber. In addition, the library has 39 issues of the Beijing Women’s Daily, a newspaper published by women for women during the 19th century. These rare materials came from various sources, with different provenances at the time of their acquisition.

Along with these are some three hundred souvenirs collected by Professor Tsien during WWII in the 1940s in Shanghai. Included are items circulated by the Japanese army, such as ordinances, announcements, leaflets, slogans, posters, maps, military flags, paper money, ration coupons, and archives relating to the surveillance of foreigners by the Japanese military police in Shanghai, as well as documents from the Nanjing and Shanghai governments sponsored by the Japanese, and underground newspapers and propaganda materials. In addition, there are documents, paper money, stamps, and commemorative medals with Mao Zedong portraits from the Border Regions in the Northwest under the control of the Communist party in the 1930s. Also included are propaganda posters and leaflets from student demonstrations and protests in Beijing and Tianjin during the years 1947–1948. These are all very rare materials vital to the study of the rise of the Communist Party in China.

Rare Japanese materials: 52 titles in Iso volumes published during the Tokugawa period on Japanese arts; and 23 titles in 7I volumes on Japanese calligraphy and painting.*

Several notable Korean studies resources are also included in the Treasure Room. One of these is a printed code of laws from 1785 (乙巳) entitled 大典通編(Taejŏn T’ongp’yŏn -1 book, 5 volumes), which supplemented the instructions and orders of the King. Taejŏn T’ongp’yŏn was the first unified code of laws from the Chosŏn Dynasty era to be written in 300 years following 經國大典(Kyŏngguk Taejŏn).

Another highlight from the Korean resources housed in the Treasure Room is the collection of roughly 2,000 North Korean stamps from 20 albums and 30 sheets. These stamps were printed and distributed by North Korea’s Postal Service between 1962 and 2018, and were acquired from various sources in China and Germany. The entire North Korean Stamp Collection has been digitized and organized into subjects which include national figures and symbols, military, the Workers’ Party of Korea, tourist sites, national heritage and folklore, traditional and European art, and animals and plants.

A final highlight from the Korean resources in the Treasure Room is a collection of modern children’s songs from 1932 entitled Chosŏn sin tongyo sŏnjip (朝鮮新童謡選集; 1 volume). Written by Kim Ki-ju and printed by Tonggwan Sojŏm in P’yŏngyang, this anthology is held solely by the University of Chicago. Of particular note, one can find within its pages the handwritten annotations of classical composer 홍난파, Hong Nan-p’a (1897-1941) 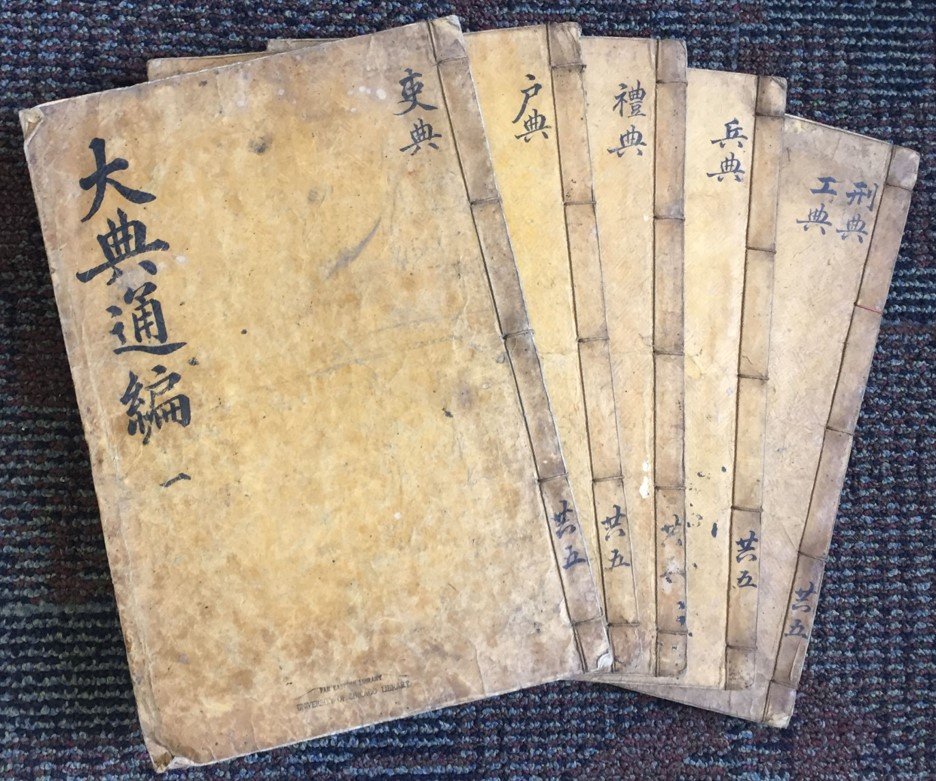 
Overall, the Rare Book Collection of the East Asian Library may not be the largest in terms of number of titles; however, it includes some extremely rare materials.