Collections & Exhibits > Exhibits > The Adaptations of Augie March: A Novel By Saul Bellow, A Play By David Auburn, A Production Directed By Charles Newell, An Exhibition by Special Collections & Court Theatre > How Chicago Shaped Bellow as a Writer

How Chicago Shaped Bellow as a Writer

The Viking Press published The Adventures of Augie March in 1953 to widespread acclaim. One of the novel’s achievements, Philip Roth observed, was raising “the language you spoke, the American argot you heard on the street,” to the level of high literature. Bellow’s Augie, like Mark Twain’s Huckleberry Finn, is the narrator of his own life story. Bellow said the shape of his novel was like “a widening spiral that begins in the ghetto and the slum and spreads into the greater world, and there Augie comes to the fore because of the multiplication of people around him and the greater difficulty of experience.” Though Augie travels far—his story leaps from Mexico to New York, Italy and a lifeboat in the middle of the Atlantic Ocean—he begins in Chicago, and the language he uses to recount his adventures bears the unique and unmistakable stamp of his city of origin. Inflected with Yiddish rhythms, salted with slang and idiomatic speech, packed with interludes of heightened poetic phrasing and allusions to high and low culture, Augie’s narrative voice immerses readers in the colloquial lyricism of the Chicago streets. As the novel’s spiral widens, and Bellow’s protagonist gains in age and experience, Augie’s language keeps pace with the evolution of Chicago speech over three decades, evoking the vernacular of the Prohibition era, tracking the minor key changes heralded by the Great Depression, and finding the tonal shift that marked the years of the post-war economic boom.

As the manuscripts and oral history interviews displayed indicate, Bellow absorbed a rich inheritance as a writer in the years he spent coming of age in Chicago. Though his earliest spoken languages were Russian and Yiddish, he picked up English on the streets of Chicago’s West Side, where he played alongside the children of Poles, Italians, Swedes, Greeks, Hungarians, Czechs and Romanians. Bellow remembered his playmates being as eager as he was to ditch their native tongues and talk exclusively on American themes--“baseball, prizefights, speakeasies, graft, jazz, crap games, gang wars.” The adolescent Bellow heard soapbox preachers on Division Street, tuned his ear to the cacophony of vendors hawking wares in the Maxwell Street Market, and drank in the words of orators, labor leaders and poets who assembled for debates in Bughouse Square, the tree-shaded park beside the Newberry Library. He haunted the stacks of multiple branches of the Chicago Public Library system, where classic texts of world literature were freely available to him, the son of a low-wage employee at the Imperial Bakery on Augusta Avenue. Later, as a student at Tuley High School in the 1930s, Bellow and his classmates toiled on the editorial boards of school literary magazines and newspapers, churning out ambitious works of original fiction, poetry and essays.

Bellow published two novels prior to Augie, The Dangling Man in 1944 and The Victim in 1947. The language of those early works in no way resembled what he achieved with Augie. Zachary Leader, Bellow’s biographer, explains that the novelist “knew that he was doing something new with The Adventures of Augie March. What he discovered with Augie, Bellow later told Philip Roth, was “that I could write whatever I wished, and that what I wished was to get into words the appearance of a gallery of personalities—characters like Grandma Lausch or Einhorn the fertile cripple, or Augie March himself. Years of notation ended in the discovery of a language that made everything possible.” 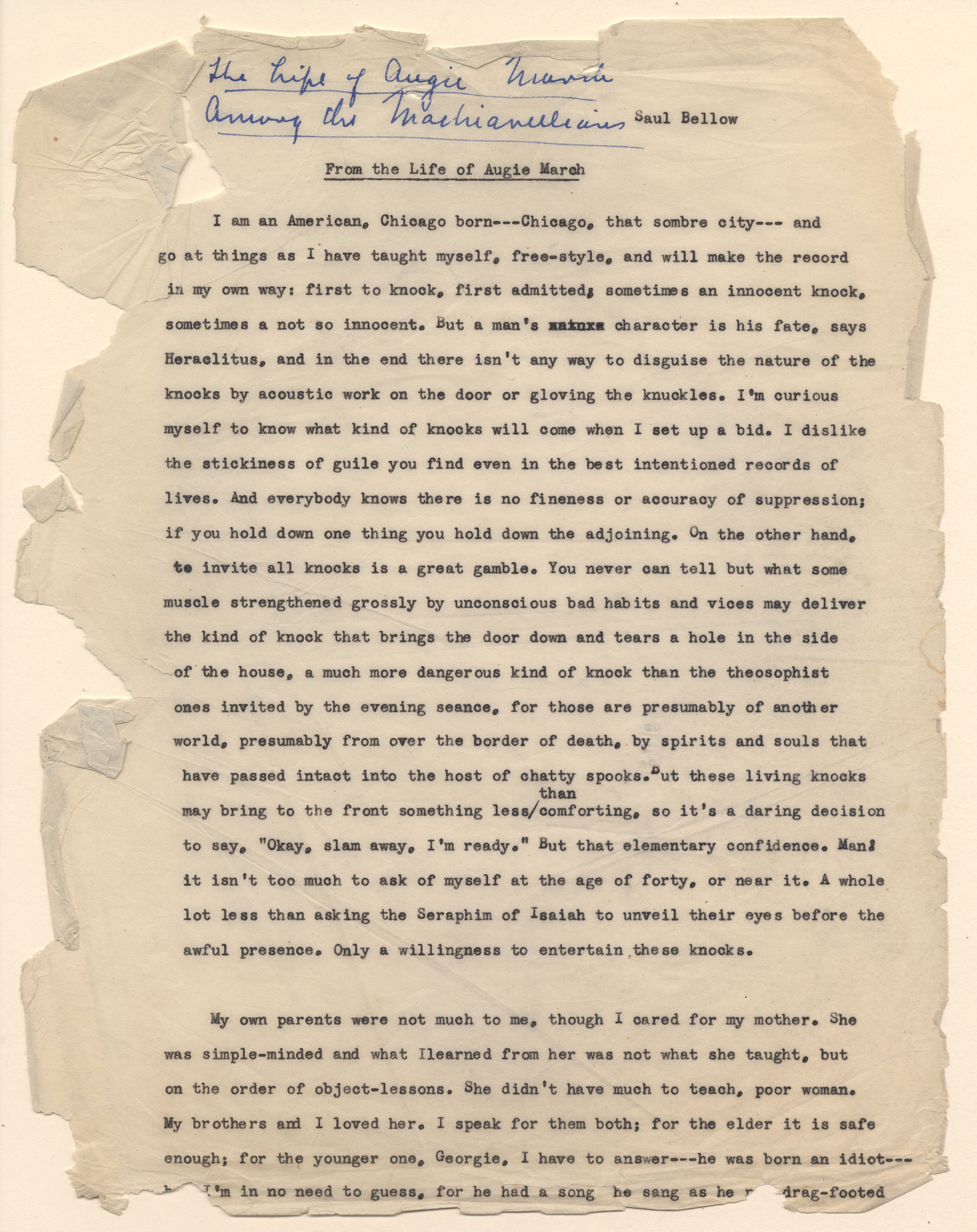