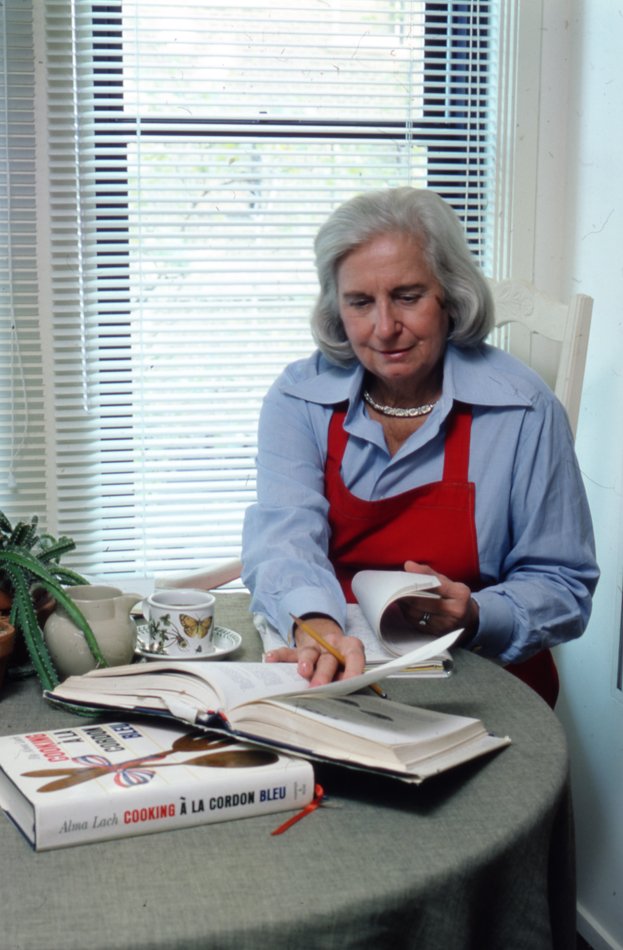 The kitchen is a crucial element to the work of any good culinary explorer. Whether during the days when Alma Lach was studying at Le Cordon Bleu cooking school, writing her various cookbooks, or consulting for restaurants and corporate clients, she was in her kitchen experimenting and refining.  Alma generally did not cook from recipes, she wrote them. Alma’s daughter Sandy recollects “she thought about food all the time. She read cookbooks as one reads sources in advance of writing.” Alma could tell if a recipe would work or not. “One had to be able to taste what one was reading, rather than just blindly following a recipe.”

Alma loved appetizers, elaborate cocktail party food, and fantastic main dishes. Each meal was an adventure. A favorite was always Pâté de Foie Gras in a rooster mold, decorated elaborately with carved vegetables and a coating of brushed butter that simulated feathers. Alma’s attention to detail also extended to the illustrations of kitchen tools and equipment she used for her book, Hows and Whys of French Cooking; these line drawings were based on items in her own kitchen.

Alma worked in numerous kitchens throughout her lifetime. Her own kitchen was an amazing space with her cookbook collection and culinary notebooks close at hand. She had an array of copper pots, which she began collecting shortly after graduating from Le Cordon Bleu, all pristinely maintained. Some of her culinary creations also utilized particular terrines and dishes. Featured in the exhibition is a favorite terrine with pheasant lid. Alma’s kitchen also served as an official licensed test kitchen, first in their apartment at 5759 Kenwood Avenue, then at 5750 Kenwood Avenue. When Alma launched her cooking school in 1967, she used kitchens in the Gas Company Auditorium on South Michigan Avenue and later in the International Institute of Foods and Family Living on North Rush Street.