Collections & Exhibits > Exhibits > A Bold Experiment: The Origins of the Sciences at the University of Chicago > Department of Biology > Instruction

Whitman was an advocate of having students specialize and get involved in research early in their career. He saw as a unit with many specialized parts. University of Chicago the biological sciences divisions thus became zoology, botany, paleontology, and physiology (anthropology was also included a short time later). The Zoology department had the largest number of students and graduates of the biological departments during Whitman's tenure, 1892-1910. During this time Whitman worked to maintain the quality of a major research university in biology through his advocacy for buildings and laboratory space, equipment, and funds to support student research as well as obtain and retain the best faculty available. 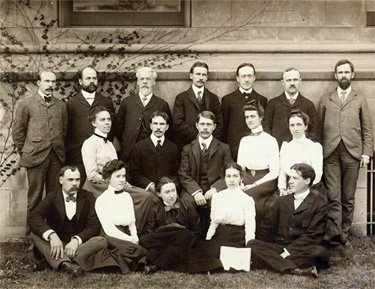 University of Chicago Department of Zoology faculty and students, 1901