How to Look After Yourself

Designed to help readers "look after" themselves, self-help books necessitated a process of self-reflection, of moving beyond the self in order to look back at it. If conduct books exposed the outward and theatrical dimensions of personhood, self-help books looked inwards to physiology and psychology, often highlighting the psychological and emotional impact of social situatedness.

Nicholas Culpeper's herbal (Item 1), a compendium of natural cures, gives its reader tools for self-diagnosis and self-healing. The reader of this book looked toward a future self and also measured his or her present self against an implied norm, such that anger, sorrow or melancholy, for example, could be understood as conditions to cure. While books like this allowed readers to be their own physicians, they also subjected them to norms of health that potentially coded everyday emotions and reactions as symptoms of pathology.

Like Culpeper's medical book, William Perkins' religious treatise on "case conscience" (Item 2) offers itself as a vehicle for psychological self-analysis and self-cure, even as it prescribes conventional moral conduct. His book, which does for the soul what Culpeper does for the body, teaches how to guard against despair by looking inward to examine conscience, but also how to prevent self-delusion by looking after conscience and developing it through a continual process of self-reflection.

Throughout his life, the Oxford scholar and librarian Robert Burton added to and revised his Anatomy of Melancholy (not illustrated), a massive compendium on the social and psychic conditions of melancholia (see Title section). In the process of writing to look after himself, Burton created a text that conspicuously looks after itself, reflects upon itself, often to its own undoing. Burton thus converted the very idea of self-help into an opportunity for theoretical speculation and textual self-reflection. 
The English Physitian: Or, An Astrologo-Physical Discourse of the Vulgar Herbs of this Nation.
London: by Peter Cole, 1652. 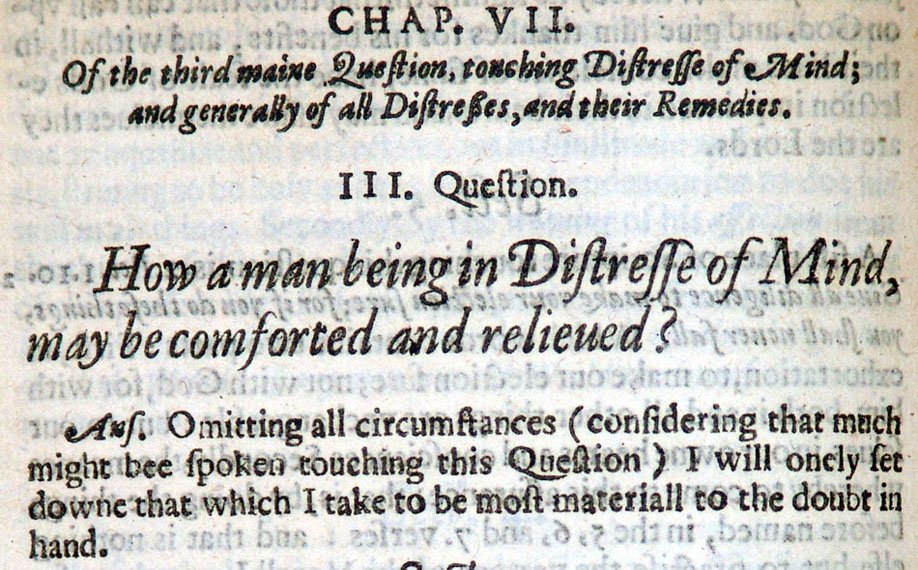 
The Whole Treatise of the Cases of Conscience.
London: by Iohn Legatt, 1628.