Collections & Exhibits > Exhibits > Building for a Long Future: The University of Chicago and Its Donors, 1889-1930 > Buildings for Teaching and the Arts

Buildings for Teaching and the Arts

The new University of Chicago was fortunate in assembling a host of major donors much more rapidly than its predecessor. The Trustees of the Old University had raised slightly more than $100,000 to launch the construction of their rather modest campus at 35th Street and Cottage Grove Avenue in 1857, but these funds were hardly sufficient to cover the full building costs or ongoing operating expenses.

The financial situation enjoyed by the second University was very different. The safety net created by John D. Rockefeller's largesse, always given with careful deliberation, was both supportive and prescriptive, supportive in the sense that his gifts underwrote current academic operations and provided for long-term endowment, but prescriptive because Rockefeller insisted that his money should not be used to erect buildings. This strategy compelled University leaders to find other donors—such as Silas Cobb, Adolphus Clay Bartlett, and Leon Mandel—who were willing to pay for the costs of building construction.

Silas Cobb's gift, which was used for the construction of the University's first building, was especially significant, not only because it provided a centrally located building on the early Quadrangles, but even more because Goodspeed and Harper managed to obtain it late in the spring of 1892, when the deadline for matching a pledge of $100,000 from Marshall Field was fast approaching. The son of a Vermont tanner and papermaker, Silas Cobb arrived in Chicago in 1833 with modest education and little money, but through shrewd business dealings in the saddle and harness industry he assembled a considerable fortune, including lucrative real estate holdings. Cobb made substantial investments in public utilities in Chicago and became a director of the Chicago Gas, Light and Coke Company. Later he secured positions on the boards of directors of two railroads, the Galena and Chicago Union and the Beloit and Madison, which were later combined to become the Chicago and Northwestern Railway. Cobb was also appointed the president of the Chicago City Railway Company and was responsible for introducing cable cars to the city. A potential donor to the University of Chicago because of his business success, Cobb was also drawn to the new institution's cause by overlapping family connections. His wife was the sister of Mrs. Jerome Beecher, and after Mrs. Cobb's death he lived with his daughter and her husband, the brother of George C. Walker. Urged on by George Walker and visited in person by William Rainey Harper, Cobb agreed in June 1892 to give $150,000 to the University of Chicago, a donation that paid the construction costs of the central lecture hall already under construction.

Also salutary for the University was the offer by Adolphus Clay Bartlett in 1900 to provide $125,000 for the erection of a gymnasium on campus, galvanizing as it did the University's early emphasis on athleticism and competitive sports. Bartlett's primary personal concern in life, however, was not physical culture, on or off campus, but rather the advance of his business interests. Beginning as a lowly clerk, Bartlett was able to take advantage of generous profit-sharing measures supported by his employer, Tuttle, Hubbard and Company, so that by 1871 he had risen to become a partner in the large Chicago dry goods firm. Reflecting his new status as a city business leader, Bartlett was appointed a member of the Chicago Board of Education in 1878, and he served on the boards of several corporations (including the powerful Northern Trust Company). Bartlett also aided in the establishment of several of the city's cultural organizations, including the Art Institute and the Chicago Historical Society, and he provided funds for the World's Parliament of Religions of 1893. In 1900, he was made a Trustee of the University, a responsibility that inspired him to supplement his initial gift to the University with $25,000 to cover additional costs incurred during the gymnasium's construction.

Leon Mandel, another prominent Chicago merchant who made a vital donation to the University of Chicago, contributed $85,000 for the construction of a much-needed assembly hall as part of the Tower Group at 57th Street and University Avenue. The sonof a German Jewish dry goods retailer, Mandel was born in Kertzenheim, Germany, in 1841 and emigrated to America in 1852, where he eventually joined his brothers in Chicago to establish a department store, Mandel Brothers. A member of Chicago's Sinai Congregation, as well as a chief contributor to both the Jewish Training School and the Associated Jewish Charities of Chicago, Mandel was always alert to ways to support religious, educational, and charitable causes. He gave several thousand dollars toward the construction of Harper Memorial Library and Michael Reese Hospital, and he made provision in his will for $100,000 to be divided among a number of the city's charities upon his death. 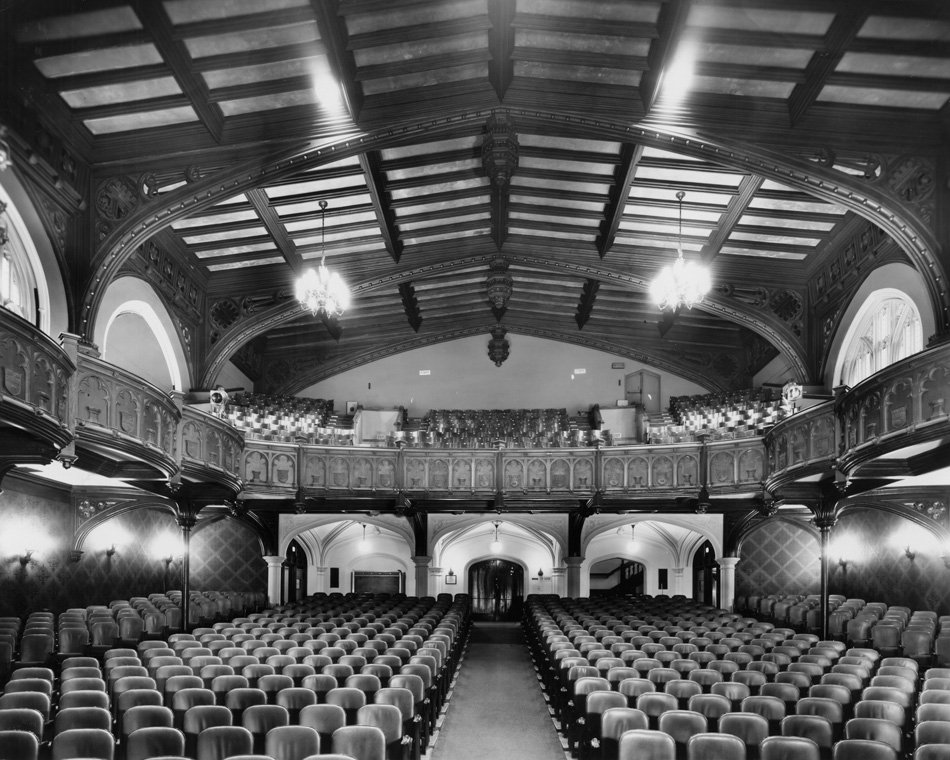