The University of Chicago's development campaign of 1924-26 was the brainchild of President Ernest DeWitt Burton. A long-time faculty member in the Divinity School, Burton had occupied various administrative leadership positions during the Harper and Judson presidencies, including the Directorship of the University Library. When Judson decided to retire in late 1922, and the pool of external candidates to succeed him proved unpromising, the Board of Trustees turned to Burton to become the third President of the University. Any notion that Burton's tenure would be merely "acting" soon disappeared. In the early months of his administration, demonstrating energetic leadership that had been woefully missing from the last five years of Judson's presidency, Burton began to conceive a broad-based fundraising effort to meet the University's financial needs.

Burton's strong leadership was desperately needed, for the early 1920s were a time of great challenges and perplexing transitions for the University. Not only had John D. Rockefeller's largesse finally come to a close with receipt of the last installment of his Final Gift in January 1920, but Chicago was encountering serious competitive challenges from Harvard, Columbia, and other leading research universities in retaining distinguished senior faculty and in recruiting the most promising younger researchers. By the mid 1920s Columbia's top salary levels for its most distinguished full professors exceeded the University of Chicago's salary range by almost 20%. Similar disparities occurred in the ranks of associate and assistant professor. Chicago required serious new investments in faculty compensation, but it also needed substantial new funds to support faculty research. As the most senior faculty from the Harper and Judson eras began to retire, the University faced the need to recruit a new generation of distinguished researchers to Hyde Park. Moreover, a massive post-war surge in student enrollments (Chicago had 13,000 students in 1924, compared to 6,000 in 1910) had put heavy pressure on facilities and instructional resources alike. Additionally, the ambitious plans for the new Medical School, which had languished during World War I, now needed to be implemented.

During February and March of 1924, Burton and his associates conducted a detailed survey of current and future University needs and concluded that the University needed to double its endowment within the next ten to fifteen years, which meant adding $55 million in new capital resources, with at least $17.5 million of this money being raised within the next two years. Working closely with Board President Harold Swift, Burton also determined that a fundraising campaign of such magnitude and scope — well beyond anything ever attempted in the Harper era — compelled the University to seek the advice and managerial expertise of outside professionals. Hence, in May 1924 the Trustees commissioned the John Price Jones Corporation of New York to oversee the first professionally directed fundraising campaign in the University's history. The Trustees further agreed upon a two-year campaign goal of $6.5 million for new buildings and $11 million for additional endowment in support of faculty salaries, facilities, research, and student life. Burton's leadership was to be critical to the success or failure of the campaign. His elegant brochure, The University of Chicago in 1940, produced in 1925 to provide an overall vision for the campaign, was and remains one of the most ambitious and coherent fundraising visions ever articulated by a President of the University.

The campaign of 1924-26 was a remarkable effort. Under the tutelage of the Jones Corporation, University officials moved beyond the traditional range of donors relied upon in the past — the members of the Board of Trustees and other selected major gift prospects — to include the University's alumni and friends and even its faculty as potential donors. An extensive network of alumni groups based throughout the United States raised $1.9 million, based on contributions from no less than 11,300 alumni, a remarkable achievement for a university most of whose graduates were not yet in positions of wealth and influence. The Rockefeller-funded General Education Board added an additional $2 million, while the University's Trustees raised close to $1.7 million within their own ranks. Prominent Chicagoans also gave generously, both toward construction of new buildings such as Wieboldt Hall and to the creation of new endowments for research and teaching, including particularly the new Distinguished Service Professorships that were one of Burton's most treasured initiatives. The first such Professorship was funded by Martin Ryerson in 1925 with a gift of $200,000, and his generosity was matched in the next several years by Frank P. Hixon, Charles H. Swift, Sewell L. Avery, Charles F. Grey, Morton D. Hull, and others. In all, the University's development effort raised $7 million in a year and a half.

Burton's untimely death on May 26, 1925, was a crushing blow to the campaign. As the final report on the campaign put it with quiet elegance, "Many alumni and citizens of Chicago believed in him and were willing to follow where he led." Inheriting a campaign that had temporarily lost its momentum, and uncomfortable with the strategies proposed by the professional fundraisers, the new President of the University, Max Mason, decided in January 1926 to conclude the University's contractual relationship with the John Price Jones Corporation and pursue institutional development in a less public manner. By 1928, Mason's "quiet" campaign had brought the total amount raised to $12 million of the original $17.5 million goal, including funds for the University endowment, new buildings on campus, and increases in salaries to retain key senior members of the faculty. 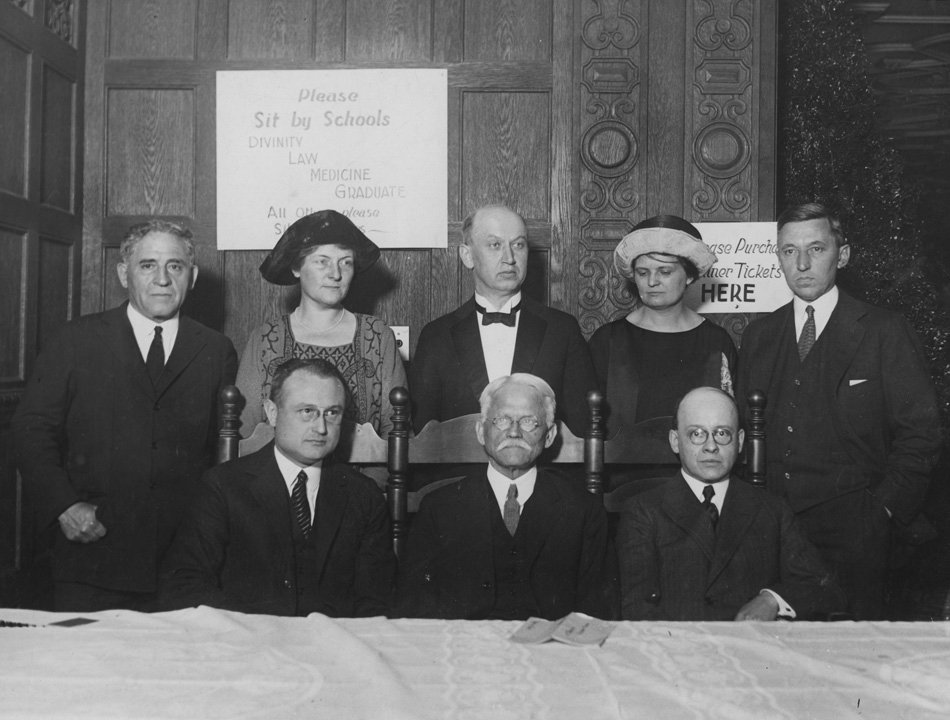