Undergraduates may not visit the Library through April 21 as part of the University response to a cluster of COVID cases. For other Spring Quarter services, please consult the Status Dashboard.

Collections & Exhibits > Exhibits > Charles Otis Whitman: His Science, His Special Birds, and the Marine Biological Laboratory > Whitman and His Pigeons

Whitman and His Pigeons

The Passenger Pigeon - A Tale of Greed and Loss

No one could have predicted the demise of the passenger pigeon (Ectopistes migratorius). Until the very last years of the 19th century, no one considered these lovely birds as anything but the bounty of a rich country. It has been said that at their peak, in the first half of the 19th century, there were more passenger pigeons alive on this planet than any bird that has ever lived before or since. An airborne migratory flock could contain millions of birds and obscure the sun for hours as it passed by.

Passenger pigeons, once described as the most impressive species of bird that man has known resembled large, sleek mourning doves. During spring and autumn migratory season millions passed along Hyde Park's lakefront, stopping to rest on trees in parks and gardens. Shooting pigeons in Jackson Park was a common pastime, a practice that continued well into the 1880s. By the 1890s the fate of the animals was becoming clear. Fewer and fewer birds were spotted in places where previously they had flourished. In Chicago, the last passenger pigeon positively identified was seen in Rogers Park "about" 1897.

Yes, man had known these magnificent birds, and killed them all. Harvested them with rakes and poles, held shooting tournaments to see who could kill the most birds with one shot, and poisoned them because they were "pests." Fat squabs were run over by carriages and drays. Although millions of birds were killed by hunting and trapping, the loss of native habitat was also a significant cause of their extinction. For thousands of years, broadleaf forests had provided food and roosting sites for passenger pigeons but many of these forests had been cleared for farmland by the end of the nineteenth century. In 1909, the American Ornithologists Union began offering financial rewards to anyone who reliably spotted a passenger pigeon. The offer was discontinued after three years; no credible claims had been received. Only one pigeon, Martha, remained, alone in the Cincinnati Zoo until she took her last breath on September 1, 1914. 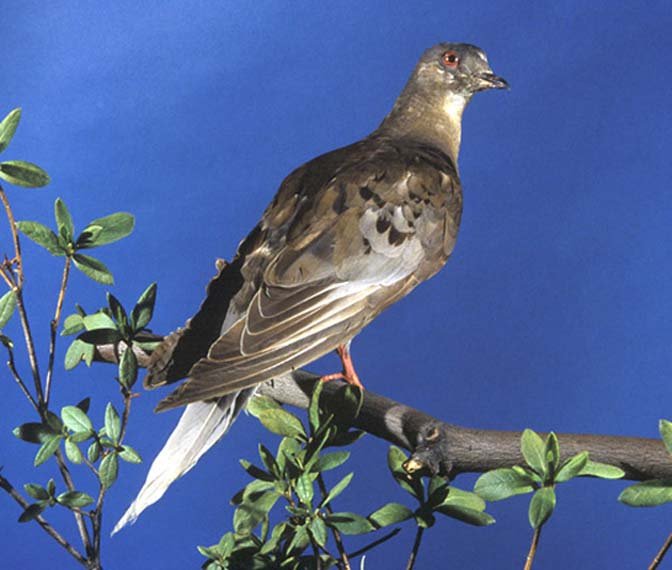