Collections & Exhibits > Exhibits > Closeted/OUT in the Quadrangles: A History of LGBTQ Life at the University of Chicago > Gay and Lesbian Law Students

Eric Webber (JD 1987) founded the Gay and Lesbian Law Students after having started a similar group at the Business School in the fall of 1984. One of the group's first goals was to get the Law School to add "sexual orientation" to its nondiscrimination policy. The Law School was the first division of the University to do so, in 1988.

In 1986, the Supreme Court's ruling in Bowers v. Hardwick allowed states to criminalize relationships between people of the same sex. Webber remembers feeling the decision was "like a slap in the face." His anger about the decision gave him the idea to organize the First National Conference on Sexual Orientation and the Law in 1987.

Irwin Keller (JD 1988) used his training as a lawyer to help activists across the city author Chicago's first non-discrimination ordinance, which passed in 1989. Keller remembers that Ambassador James C. Hormel, JD 1958 and former Dean of Students at the Law School, asked to meet the gay and lesbian law students when he visited campus in 1986. These students talked to Hormel about a loan forgiveness program for people going into non-profit work, and in 1987 he created the James C. Hormel Public Service Fund to support students going into public service law. 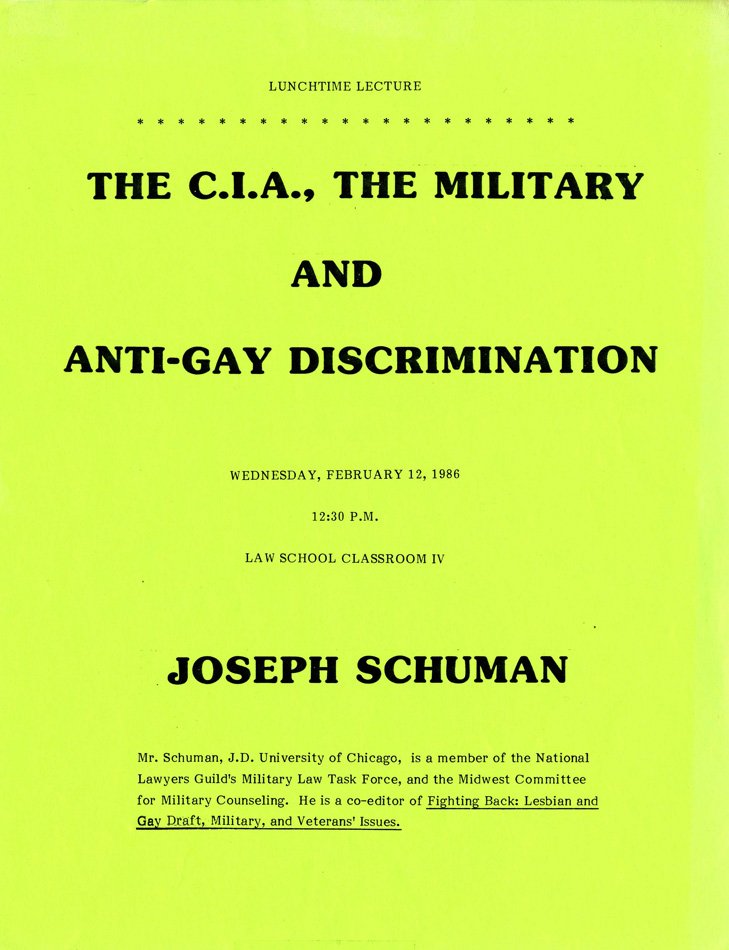 The C.I.A., the Military and Anti-Gay Discrimination
Handbill, 1986
Closeted/Out on the Quadrangles Collection
Donated by Eric Webber

The law student organization used the amended nondiscrimination policy to protest campus recruiting by organizations like the CIA and Army JAG Corps that did not accept gays and lesbians. One year, gay and lesbian law students signed up for every single recruiting interview and "played it straight" until the end of the interview, when they revealed that they were gay. Webber recalls: "we wanted not just to harass the guy... but to have a thoughtful conversation about how the policy was denying them the interest of very qualified people."