Collections & Exhibits > Exhibits > Closeted/OUT in the Quadrangles: A History of LGBTQ Life at the University of Chicago > Gay Liberation

In the late 1960s, black liberation, women's liberation, and anti-war protest all swept through the campus. Another of these new social movements was gay liberation, and the Chicago Gay Liberation Front (GLF) was founded in Hyde Park in 1969.

Murray Edelman (PhD 1972) placed ads in The Maroon about forming a "Student Homophile League" in June 1969, while Henry Wiemhoff placed an ad looking for a gay roommate in October 1969. Michal Brody, living in Hyde Park and driving taxis at the time, responded, recalling later that Wiemhoff was surprised because he "never expected a woman might consider herself gay or to be in that category. Fortunately no one else responded to the ad, so he gave me the room."

The Gay Liberation Front met in Wiemhoff and Brody's apartment; some people walked around the block several times before getting up the courage to go in. GLF members went public with their own stories, including a February 1970 appearance on Studs Terkel's radio show and an eight-page Gay Liberation Supplement in the Chicago Seed. They also protested misinformation in David Reuben's book Everything You Ever Wanted to Know About Sex, adding stickers to the title page reading [and vicious homophobic lies]. Edelman even interrupted a taping of the Howard Miller TV show featuring Reuben.

The GLF also created spaces for gay men and women to connect, including dances where people of the same sex could dance together. Alumni fondly recalled the weekly coffeehouse in the Blue Gargoyle, located at 5638 S Woodlawn. John DelPeschio (AB 1972) was in a night of theater called "What are Ladies' Voices?" where they performed Tennessee Williams' play Talk to me like the Rain twice, reversing the genders the second time. The Blue Gargoyle also had a monthly women's coffeehouse that hosted lesbian musicians; lesbian newspaper Lavender Woman—edited by a collective including Wiemhoff's roommate Michal Brody—published a review of one of those concerts.

Gay Liberation happened in the context of the civil rights movement, and many white oral history narrators consciously connected their experiences in the two movements. Kevin Burke (AB 1972, PhD 1999) remembers it as one of the first times he was able to "talk to black people as peers," and recalls doing coalition work with the Black Panthers. In a letter asking for office space, Burke and Edelman patterned their demands after those of the University's Black Student Organization, an analogy that Dean O'Connell rejected along with their demands.

Hannah Frisch (AB 1964, PhD 1976) led the picket line at the PQ bar, which required African-Americans to show multiple forms of ID in order to enter. Historian Allan Bérubé (X'68) wrote an essay titled "How Gay Stays White and What Kind of White It Stays" where he described the practice of "triple-carding" as "a form of racial exclusion—policing the borders of white gay institutions to prevent people of color from entering." The picket line against triple-carding, the insistence on bringing community members to the dances, and coalition work with the Black Panthers were all protests against this kind of border policing.

After the burst of initial activism around the Gay Liberation Front moved to other parts of the city, gay activism at the University mostly failed to engage with questions of race and racism for nearly twenty years. Many alumni described a "siege mentality" distancing the University from its surrounding community. Minority enrollment was also low, hovering around 5% in the College for most of the 1970s. These factors combined to make University-based activism another example of "how gay stays white" until student-led efforts at change in the 1990s and 2000s. 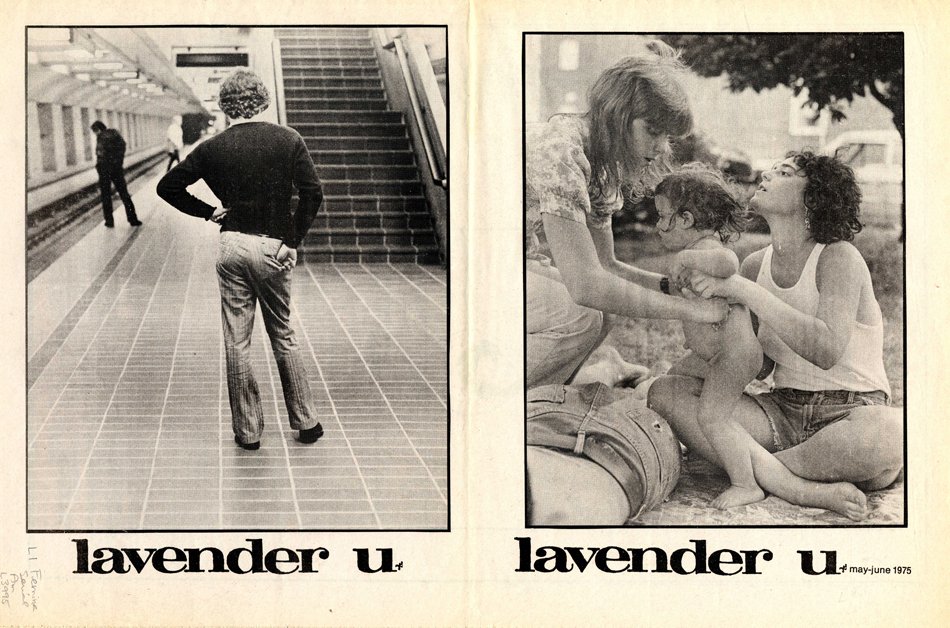 Students involved in gay liberation at the University brought the spirit of intellectual inquiry across the country. Kevin Burke (AB 1972, PhD 1999) and Murray Edelman (PhD 1972) moved to San Francisco after graduation to live in a gay commune. While in California they started Lavender U, a catalog of courses directed towards gay men and lesbians. Burke taught photography and took the photographs on the cover of the catalog. He told us that "The women would teach things like auto mechanics and the men would teach things like crocheting. We thought it was really cool for gender role breakdown... We had a course about how to write sex ads called Cruising 101." Lavender U was also the beginning of Front Runners, today the largest gay running group.