Collections & Exhibits > Exhibits > Closeted/OUT in the Quadrangles: A History of LGBTQ Life at the University of Chicago > Women's Relationships at the early University

Women's Relationships at the early University

Professional women at the turn of the twentieth century often found it easier to achieve their goals outside of heterosexual marriage. Many chose to pursue close emotional, financial, and sometimes sexual partnerships with other women in what was then called a "Boston marriage."

Attitudes toward female homosexuality were also changing rapidly in this period, such that the relationships documented in this case may have been more acceptable to the outside world when they started than when they ended. By the late 1920s and 1930s, close relationships between women were increasingly taken to imply a "disordered" homosexual identity, and a 1929 case study by a Sociology student shows that Marion Talbot was known for having "such affairs." Some women may have embraced a certain amount of strategic ambiguity in order to escape scrutiny and stigma.

In her 1929 study, Katherine Bement Davis (PhD 1900) found that 46.2% of women born in the late 19th century reported homosexual experiences, but only 21.4% of women born in the first decade of the 20th century did. What might account for this decline? The transcript of a sex education session in a women's dormitory in 1947 spells out a new outlook on relationships between women: female homosexuality might be acceptable as a developmental phase, but if kept up for too long, it was evidence of an immature personality. 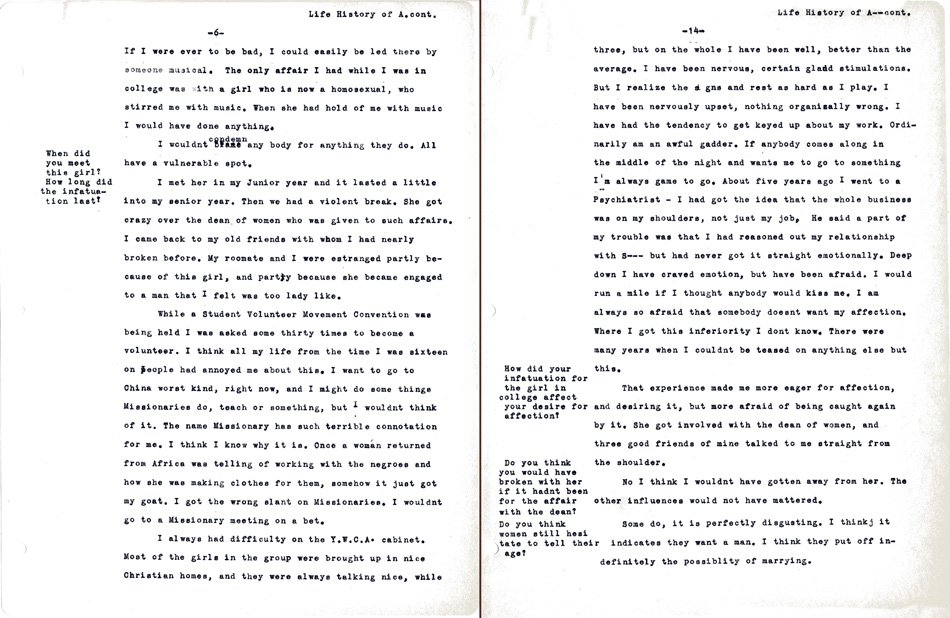 Life History of A
Typewritten manuscript, 1929