The literary and visual art journal Spirale, founded in Bern, opposed the subjectivism and irrationality associated with American abstract expressionist painting in the name of what the editors called “absolute abstraction.” Absolute abstraction was understood, paradoxically, in “concrete” if not objective terms that would supply a universal artistic standard available to anyone, regardless of their mothertongue. Concrete poetry was one such abstract art. It was in Spirale that Eugen Gomringer would publish the first international anthology of concrete poetry in 1958, evidencing the formal and utopian ambitions of the concrete art movement.

Concrete poetry is a typographical art. In the form of carefully arranged yet non-grammatical sequences of words, or in meticulous patterns of isolated letters, numerals, and punctuation marks, typography provides its raw material. A common concern of concrete poetry was how simple, beautiful, graphic arrangements of linguistic elements can nevertheless give rise to disorientation—in space and in reading.

Linking the graphic potential of punctuation to the production of space on a map, Helmut Heißenbüttel referred to his poems as “topographies.” Gomringer’s poem beginning “cars and cars,” an example of what he called a “constellation,” shows the repetitious and playful exploration of symmetry and exchangeability typical of his poems. Ludwig Gosewitz’s “typograms” further reduce typography to its most basic graphic marks, eliminating words and letters in order to initiate a rhythmic visual reading process.

Many of Dieter Roth’s early “concrete” books were first made in the years when he was an editor for Spirale. They contrast with his later work (seen elsewhere in the exhibition) in the precision of their geometrical design and the tactile engagement they solicit. All of his books, however, share a persisting preoccupation with embodiment and perception. 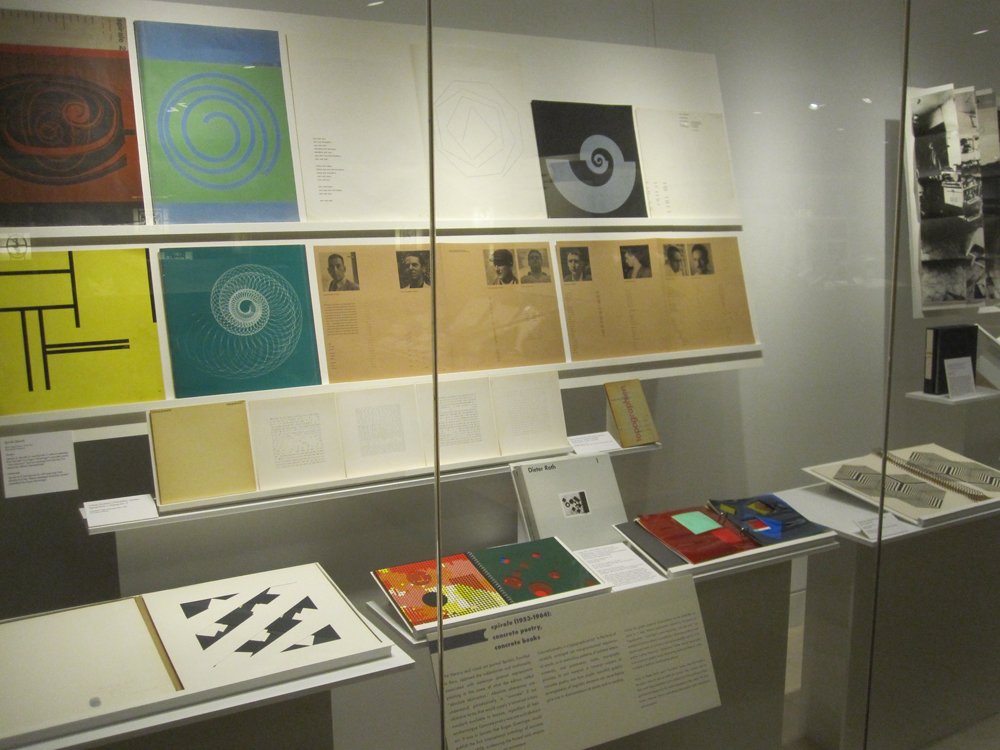