Bison of the National Parks

A bison was featured on the arrowhead version of National Park Service logo introduced in the early 1950s, marking its symbolic importance to the nation and the national parks

In 1972, Mary Meagher, a research biologist stationed at Yellowstone National Park, corresponded with Charles E. Olmsted about an outbreak of brucellosis in bison, which threatened nearby livestock. Olmsted was a faculty member of the Botany Department and also served as a consultant for the National Park Service. Meagher wrote a report arguing for a boundary rather than eradication program of bison due to the “unique esthetic and scientific values” of the Yellowstone bison population.

On May 9, 2016, bison were named the national mammal when President Barack Obama signed the National Bison Legacy act into law. Bison used to inhabit the Great Plains in the hundreds of thousands but their numbers were in the hundreds by the late 1800s due to hunting and removal of their habitat for farming and settlements. Thanks to conservation efforts on behalf of the Department of Interior, tribes, and states, bison are back roaming national park lands. For those in the Chicago area, you can see these beautiful animals in nearby Batavia at Fermi National Accelerator Laboratory. There the descendants of a bull and four cows brought to the lab by its first director Robert Wilson in 1969 live today. 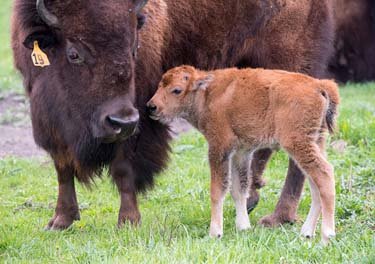 The first baby bison of 2016 joins the Fermilab herd
Photo by Reidar Hahn.