Collections & Exhibits > Exhibits > Discovering the Beauty and Charm of the Wilderness: Chicago Connections to the National Park Service > Mammoth Cave

Nathaniel Kleitman was a faculty member of the Department of Physiology and made significant contributions to modern sleep research. In 1938, Kleitman conducted a sleep research study with graduate student Bruce H. Richardson in Mammoth Cave, Kentucky over the course of 32 days. During the experiment, Richardson and Kleitman adapted to a 28-hour day under “uniform conditions of temperature, illumination, and quiet of the cave.” Their experiment demonstrated that the human bodies roughly maintains a 24 hour temperature cycle even with the absence of external cues. Kleitman wrote Sleep and Wakefulness in 1939, an account of the Mammoth Cave study findings.

Here is some news footage from that time about the experiment. 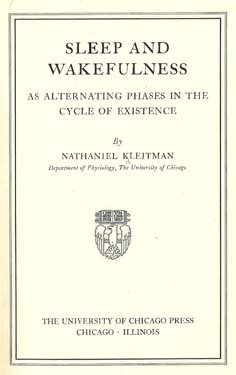 Title page of Sleep and Wakefulness