Collections & Exhibits > Exhibits > Discovery, Collection, Memory: The Oriental Institute at 100 > Groundbreaking: The Making of an Institute

Groundbreaking: The Making of an Institute

Ground was broken at the corner of East 58th St. and University Ave. in April of 1930 to build the new “headquarters” of the OI. Since its founding in 1919, field expeditions had expanded rapidly to include Anatolia, Luxor, Megiddo, and Persepolis. At the same time, a number of philological projects like the Chicago Assyrian Dictionary had begun, making Haskell Hall too small to accommodate all of the Institute’s needs. Breasted writes, “For the first time in the history of modern research, the synthetic study of early man himself has been granted a home beside the laboratories of the natural sciences in a correlated effort to reconstruct through pure research the epic of mankind’s long and mysterious development.” (Third Handbook, 1931). With Rockefeller’s support, the building was designed by Oscar H. Murray of the firm Mayers, Murray, & Phillip and every detail was carefully considered and designed. Breasted organized a Symbolism Committee and together they constructed models of design features that could be represented throughout the interior of the neo-Gothic building. Many of these designs were taken from Assyrian Sculptures: Palace of Sinacherib; Die Kunst des alten Orients; and Atlas de L’Histoire de l’Art Égyptian. In the end, many of Breasted’s ideas were simplified for the sake of economy, but they include the Tympanum over the front doors entitled, “East Teaching the West,” the lion heads on the main staircase, which are a nod to the lion statues that guarded the Ishtar temple at Nimrud, and the ceiling cornices in the lobby, which depict a pattern of Egypto-Assyrian floral friezes. This vision endures today as the headquarters of an ever-expanding Oriental Institute and museum. 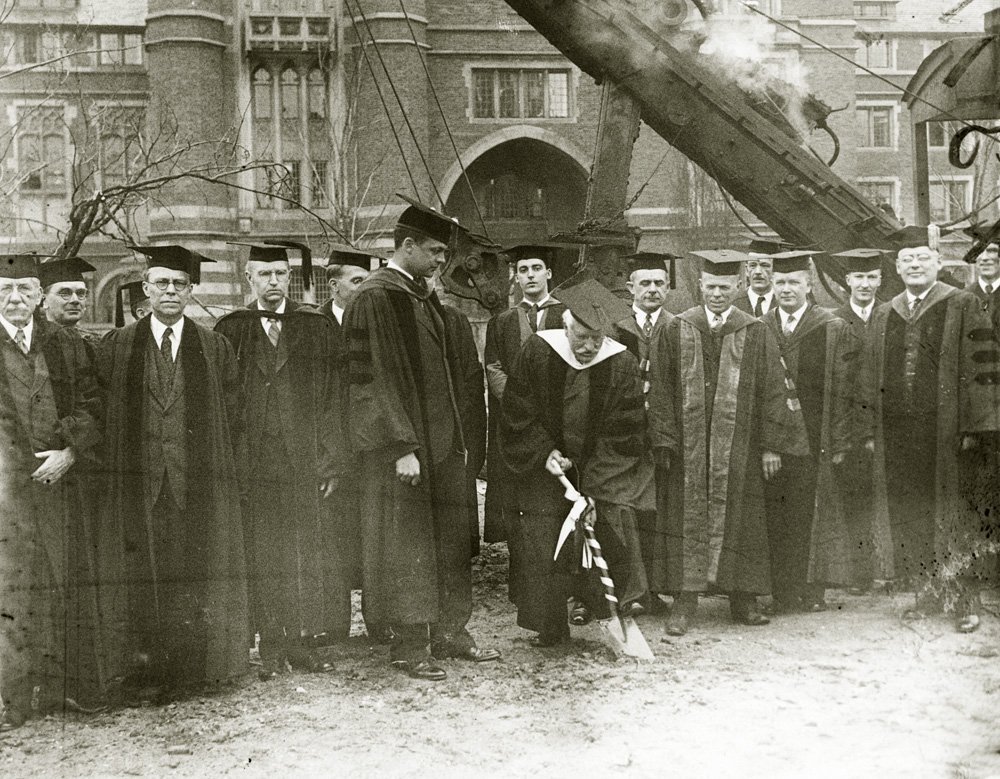 Groundbreaking at the Oriental Institute