Collections & Exhibits > Exhibits > On the Edge: Medieval Margins and the Margins of Academic Life > Diagrams

“Every medieval diagram is an open-ended one; in the manner of examples, it is an invitation toelaborate and recompose, not a prescriptive schematic.” -- Mary Carruthers, The Book of Memory: A Study of Memory in Medieval Culture (1990)

Diagrams were prevalent in medieval scholastic and scientific manuscript culture. Often placed in the margins of the page, diagrams worked as part of the apparatus of a text, helping to organize it and make it understandable. The heuristic power of diagrams made abstract ideas concrete and visible yet maneuverable in the mind.

Today diagrams remain central to learning at the University, appearing in textbooks and PowerPoint presentations, on whiteboards, and in notes. Diagrams are also a tool for communication outside the classroom, for example in chalk advertisements on walkways and in graffiti in the Regenstein library. 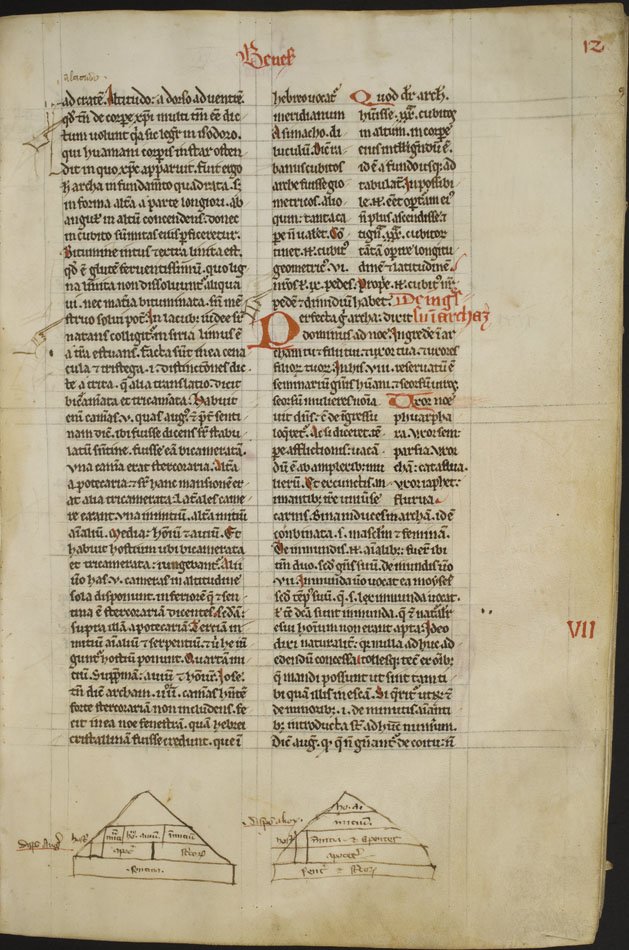 Scholastica, a paraphrase of the historical books of the Bible. Petrus’s work was part of the core curriculum of medieval universities. As can be seen from the many annotations and markers in the margins, this copy was meant for study purposes. The opening on view recounts the story of Noah and the building of the Ark from the book of Genesis. In the lower right margin, a student translated the textual description of the Noah’s Ark into a diagram, depicting the internal division of the ship with each chamber assigned to different types of animals.