No single image could possibly convey the horror of the Great War's battlefields. Some illustrators relied on traditional representations, adapting the conventions of nineteenth-century history painting, but substituting contemporary uniforms for the combatants. Others, who had experienced the war firsthand, such as Charles Martin or Fernand Léger, captured the despair of the conflict by more oblique means. 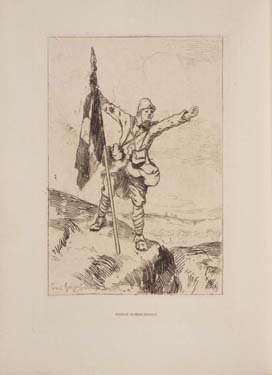 An established, exhibited artist before the war, Paul Guignebault had already illustrated books, sometimes made in tandem with his teacher, Henri Boutet. Here, he provided a frontispiece of a French soldier, holding the tricolere and urging his comrades forward. Perhaps the texts in this pocket-size volume were also meant as an encouragement to those waging battle. Its verses and epigrams feature among others Pascal, Racine, Saint Augustine, Robespierre, Hugo, and Napoleon.