One way of uniting everyone in the country was to make the foes of France vivid to soldiers and citizens alike. The Central Powers were mocked, vilified, and satirized. The Germans received most of the attention—the pointed pickelhaube helmet became a common symbol for them. Franz Josef, emperor of Austria and king of Hungary, is represented as being in his dotage in La baïonnette's "Impérial gaga." And, the Ottoman Empire allowed illustrators to include a touch of the exotic. 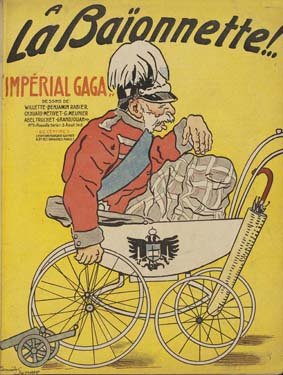 Published weekly from July 8, 1915, until April 22, 1920, for an initial price of twenty centimes, the satirical magazine La baïonnette conveyed its take on the war visually, with no photographs and very little text. In its initial appearances, La baïonnette exemplified the expression "Keep your friends close and your enemies closer." The first issue was entitled "Le kaiser rouge," and all the numbers that immediately followed were devoted to a satiric examination of the enemy, an ongoing preoccupation. A sample of titles will demonstrate: "Le clownprinz," "Têtes de Turcs," "Bouillon de kultur" or their depiction of the Austro-Hungarian emperor in ""Impérial gaga."