All Library buildings are currently closed. Planning for the resumption of operations on campus is underway.

Nature and Ecology in the Western World

Exhibition on view from May 1, 2017 – Regenstein 3rd Floor Reading Room 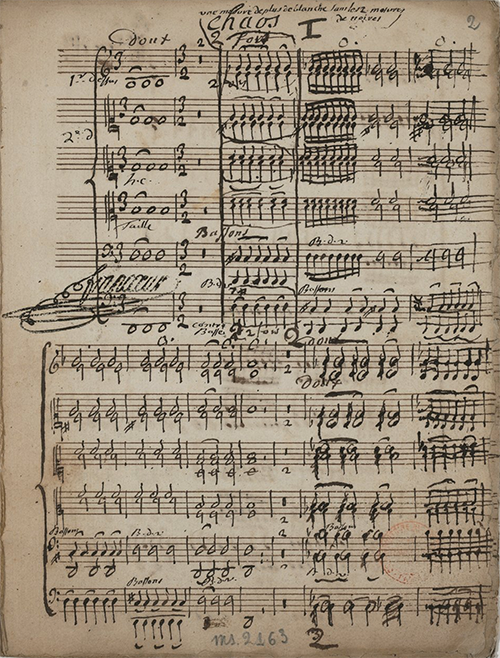 Jean-Féry Rebel’s ballet Les Elements (1737) is a singular work depicting the four elements: Earth, Water, Fire and Air. Rebel, a composer and violinist, wanted to create a work that accurately depicted the chaos that is eventually tamed by these elements, thus creating one of the most startling and original passages in Western music history. The work begins with chaos, as strings, winds and harpsichord play a dense cluster of notes that rivals any of the dissonances found in the work of 20th century modernists. Rebel himself was aware of the impact of this opening gesture, writing a detailed explanation of his reasoning and philosophy behind the music before the work’s premiere: “I dared to undertake to link the idea of the confusion of the elements with that of confusion in harmony. I hazarded to make heard first all sound together or rather all of the notes of the octave united as a single sound.”

Beethoven’s Pastoral Symphony is an early example of programmatic music, in which a narrative plays out over the course of an otherwise instrumental piece of music.  Nature played an important role in Beethoven’s creative process, with his walks in the woods serving as incubators for new ideas. In the Pastoral Symphony, his sixth, Beethoven sought to depict specific aspects of the natural world, as well as its relationship to humanity. Thus, each of the five movement describes a specific aspect of pastoral life: (1) Awakening of Happy Feelings on Arriving in the Country, (2) By the Brook, (3) Merrymaking of the Country Folk, (4) Storm, and (5) Shepherds’ Song: Joy and Gratitude after the Storm. 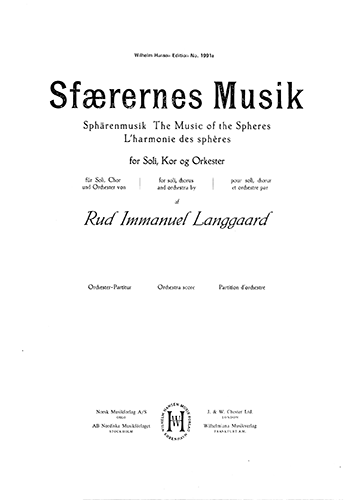 In De institutione musica, the Roman writer and statesman Boethius (c.480–c.524) developed the concept of music of the spheres, a mathematical music produced by the movements of the planets, either inaudible to the human ear or not involving sound at all, but nevertheless an all-pervading force in the universe. This celestial music, also called musica mundana, was fundamental to the development of early music theory, and to the work of Johannes Kepler. Though it has ceased to serve any useful scientific purpose, the music of the spheres continues as a source of inspiration for composers over a millennium after its writing. 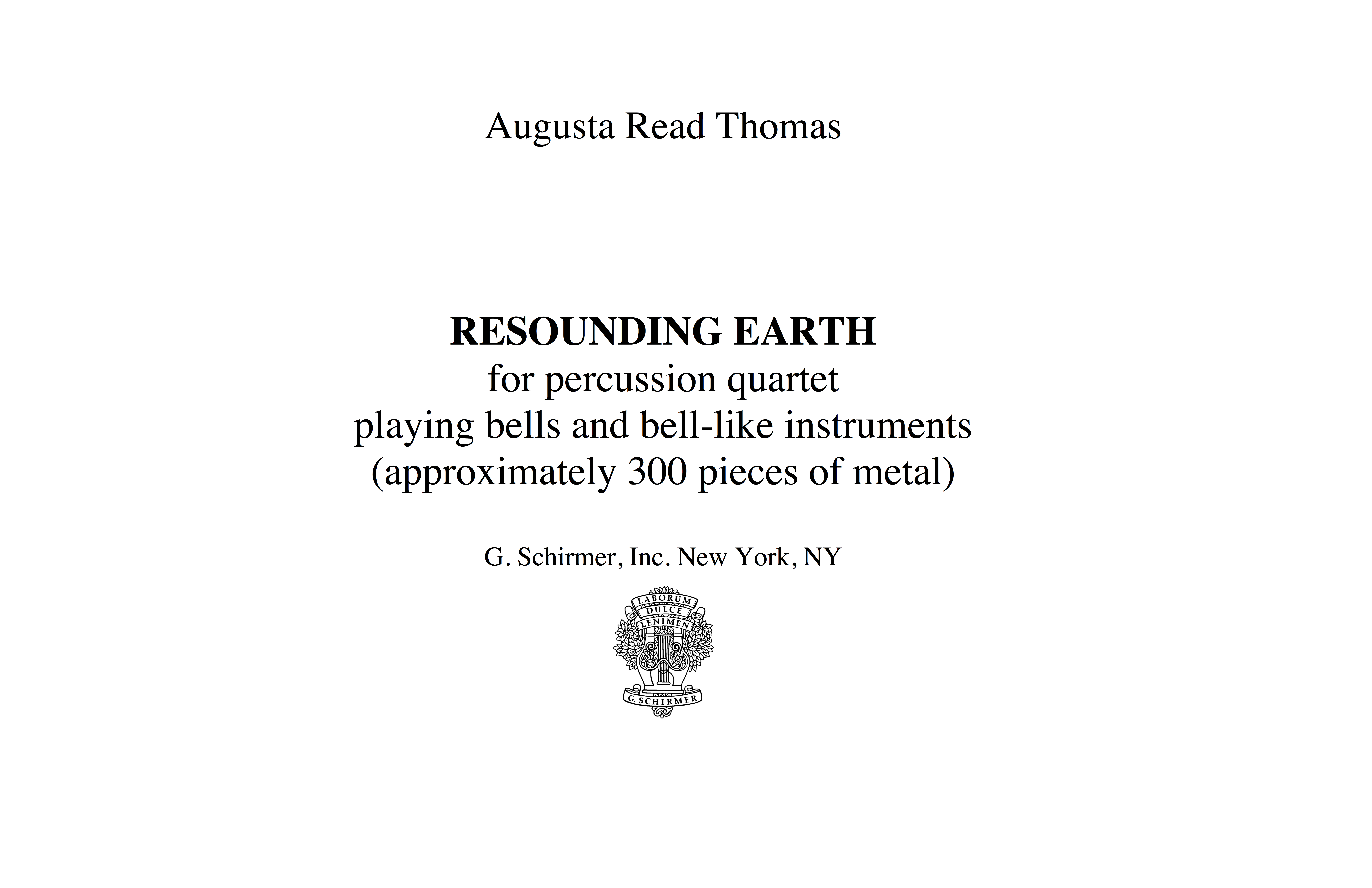 The music of composer and University of Chicago Professor Augusta Read Thomas can be characterized by its sense of resonance, and few works demonstrate this quality more than Resounding Earth, a 30-minute percussion quartet utilizing over 300 pieces of metal. The work features the bells and metallic instruments of numerous cultures throughout the world and, in Thomas’ words, probes “into bells’ rich meanings and characteristics as carriers of history, ethnicity, societally and cultural connotations.” In viewing the Earth as a musical community, the work is conceived as a “cultural statement celebrating interdependence and commonality across all cultures, and as a musical statement celebrating the extraordinary beauty and diversity of expression inherent in bell sounds.” 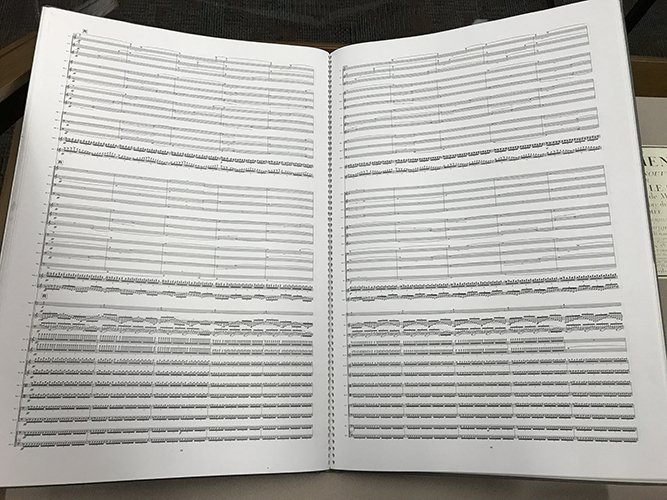 Music in the Anthropocene

The music of John Luther Adams is inextricably linked to the natural world. A longtime resident of Alaska, the majority of his works deal with its landscape, culture, and environment. Living in the sub-arctic climate provided Adams with a firsthand glimpse of the ravages of climate change: “In our last decade here, the summers began to swing from one extreme to the other. A summer of vast wildfires would be followed by a summer of seemingly incessant rain. The first snows of autumn, which we could always expect in September, now came as late as the end of November. Spring breakup, which used to arrive suddenly and explosively in May, now became a slow meltdown, beginning as early as March. Winter temperatures became dramatically milder, and our sub-Arctic winters lost the pristine cold and deep stillness they once had.”

Adams’ largest orchestral piece, the Pulitzer-Prize-winning Become Ocean, deals explicitly with the threat of climate change, as he explained in his terse note for the 40-minute work:

“Life on this earth first emerged from the sea. As the polar ice melts and sea level rises, we humans find ourselves facing the prospect that once again we may quite literally become ocean.”