Modern South Asia is a region of amazing linguistic diversity where 29 languages are each spoken by more than a million people; in India alone, there are an estimated 780 different languages. The Library's unique collection of popular media reflects this diversity. It includes pamphlets, religious works, magazines, posters, children's books, political tracts, and ephemera in all of South Asia's official and many of its unofficial languages and dialects.

Myth and history entwine in popular stories handed down through generations and across regions. Featured here is a well-known book of folk tales about the third Mughal emperor, Akbar, and his witty advisor Birbal. These clever moral stories are part of an oral tradition that stretches back centuries. The comic-book version of the legend of Rani Durgavati tells the story of the valiant Rajput queen who led her army against Akbar's forces and died on the battlefield.

From the first full-length Indian film of 1913 to the global blockbusters of Bollywood, the commercial film industry has dominated modern visual culture in South Asia. Cinema songbooks and magazines richly illustrated with pictures of film heroes and celebrities reflect the fame of professional actors, composers, and vocalists across the subcontinent.

In big cities and small villages alike, images of film heroes compete for attention and devotion with those of celebrated religious and political figures.The posters on display here might adorn private homes, shops, and offices, while the devotional booklets are mostly for personal use.

In addition to the materials housed in Chicago, the Library also owns local collections that remain in South Asia and serve researchers and students there. The Roja Muthiah Research Library in Chennai (Madras), founded in 1994, is the first such collection. It is named for Roja Muthiah, a graphic artist and designer who began collecting books, journals, and artworks in the 1950s. This extraordinary collection now contains more than 300,000 works of classical and modern literature and literary criticism, as well as a range of ephemeral print items such as gramophone records, songbooks, oleographs, theater handbills, and invitation cards. 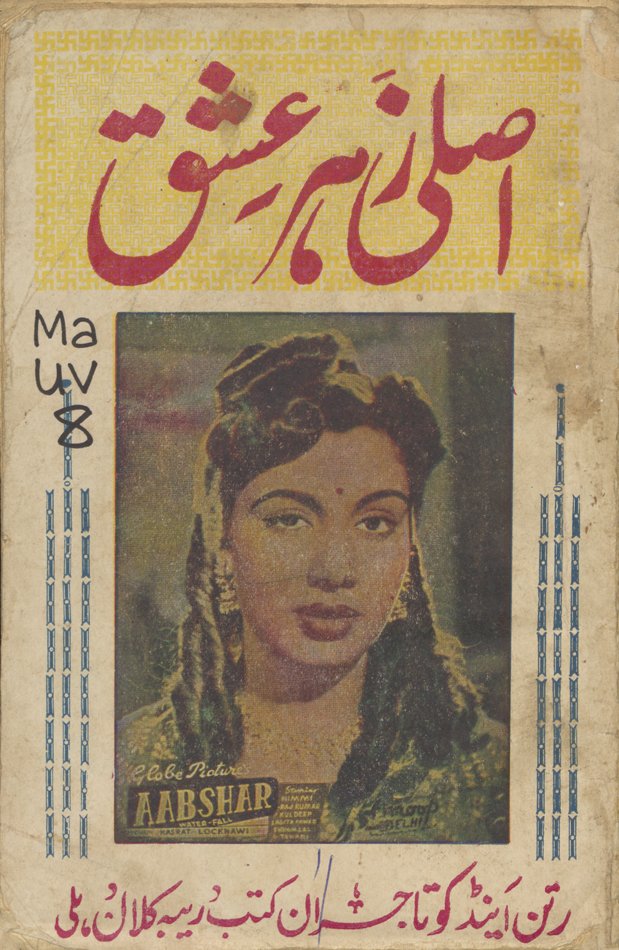 A booklet on the film Aabshar (1953), starring the legendary actress Nimmi.