When Alice Freeman Palmer resigned from the University in 1895, thirty-seven year-old Marion Talbot assumed the title of Dean of Women, a position she held until her retirement in 1925.  Talbot-a graduate of Boston University and M.I.T.-supervised nearly every aspect of undergraduate and graduate student women's lives at Chicago. She lived with students, first at temporary quarters in the Beatrice Hotel, just east of campus, and then on the main quad as head of Kelly Hall.  Administrators, parents, and even Hyde Park neighbors corresponded regularly with Talbot, asking her to supervise the behavior of women students and, at times, suggesting she discipline them.

Talbot also taught in the Department of Social Science and Anthropology beginning in the 1892-93 academic year; her elevation to full professor occurred a decade later with the establishment of the Department of Household Administration.  She served as a director of the American Association of University Women and authored numerous publications including The Education of Women (1911), The Modern Household (1912) co-authored with Sophonisba P. Breckinridge (PhD 1901, JD 1904), and More Than Lore (1936), a memoir of her long career at the University of Chicago.

Talbot often joked about her many duties at Chicago. Writing the night before classes began in October 1892, she noted, "Tomorrow I begin my part as dear-professor instead of dear-scrubwoman!"  She wore many hats in her three decades at Chicago: instructor and administrator, dorm mother and housekeeper, disciplinarian and mentor.  Inspired by their role model, many of Talbot's early students went on to take similar positions directing the education of women at Chicago and other American colleges and universities. 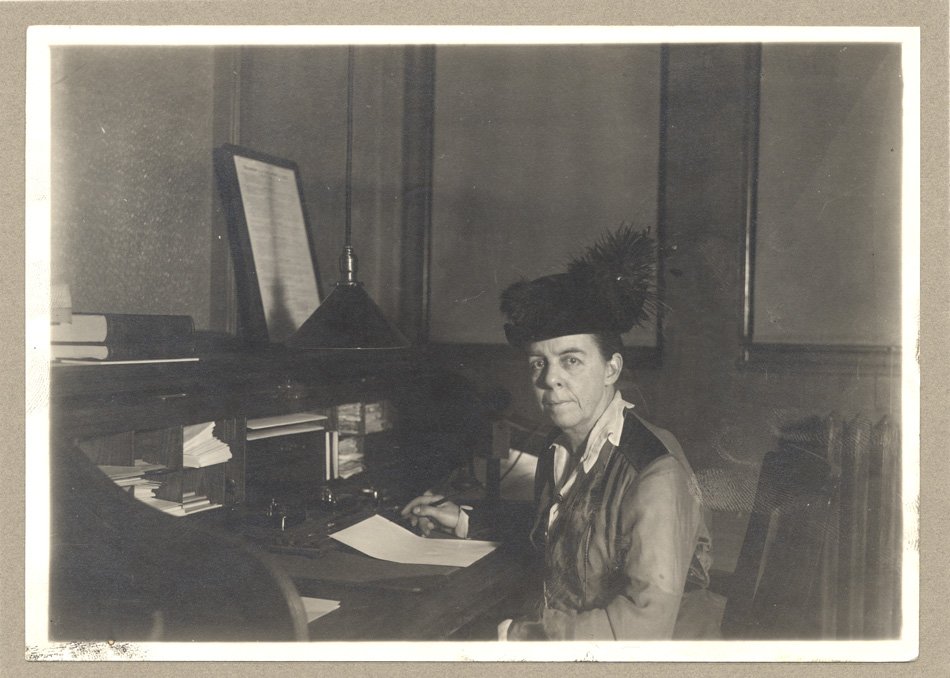 Marion Talbot at her desk, n.d.