"I've got it!' Conroy said Chanute cried repeatedly, jumping up and down in his jubilancy over the successful flight.

Chanute hired Augustus Moore Herring, from New York City, to first build, then test and evaluate glider models. Herring had recently built a full-size Lilienthal-type glider and was quite successful with this machine. Chanute felt that there was enough expertise in Herring’s glider to warrant meaningful experimentation. The models, using different wing shapes and structures, were test flown in New York and along Huron Street Beach in Chicago. One of the models, the “ladder-kite” is on display at the Museum of Science and Industry.

In addition to Herring, Chanute hired a local carpenter and electrician William Avery. The trip made good progress and soon two flying machines were ready for testing and experimentation. 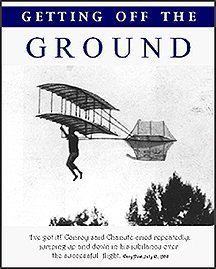 Getting Off the Ground