Octave Alexandre Chanut was born on 18 February 1832 in Paris, France. When his father Joseph Chanut accepted a position as Vice-President and History Professor at Jefferson College, just north of New Orleans in the fall of 1838, he took his son along to the New World.

In 1854 he became an American Citizen, Americanized his name by adding the letter “e” to his family name and dropping his middle name. He became Octave Chanute. 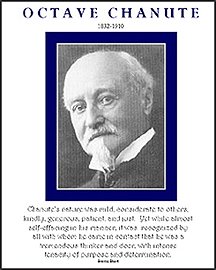