Now, with spacecraft, we cross-continents and oceans in a few minutes. One can even buy a "ticket" as a tourist to go to the space station. Aviation and space is wide open for everyone....

The program will test "scramjet" engine technologies to be used in future space travel, to launch satellites, and to reduce the time of conventional travel between continents to a mere few hours.

In the second photo at right is an overhead view of the Hyper X-43A interior. NASA's staff, at the Dryden Flight Research Center, work on mating Hyper X-43A with its Pegasus booster rocket for a first, early 2001 summer test flight at Mach 7.

After being launched by a B-52 aircraft, a Pegasus booster rocket will be used to accelerate H-43A to hypersonic speed enabling H-43A to fly under its own power.

In the third photo, Helios Prototype, a solar-powered flying wing, is on its first successful solar-powered flight over Pacific Ocean. This flight set the world record for a non-rocket powered aircraft to reach and sustain the altitude of 96,500 feet.

"Sailing in space could be one way to go to the stars. Researchers at NASA's Marshall Space Flight Center in Huntsville, AL, are pursuing space sails as an advanced concept of intersteller travel.

Thin, reflective sails could be propelled through space by sunlight, microwave beams or laser beams - just as the wind pushes sailboats on Earth."

"Marshall engineers are testing magnetic levitation - or maglev - technologies that could levitate and accelerate a launch vehicle along a track at high speeds before it leaves the group. Using electricity and magnetic fields, a maglev launch-assist system would drive a spacecraft along a horizontal track until it reaches desired speeds, and then the vehicle would shift to onboard engines for launch to orbit."

"Antimatter propulsion is a staple of science fiction, and technology development activities now underway in the Advanced Space Transportation Program at NASA's Marshall Space Flight Center in Huntsville, Ala., could loft an antimatter-powered starship into the realm of reality before the close of the 21st century." 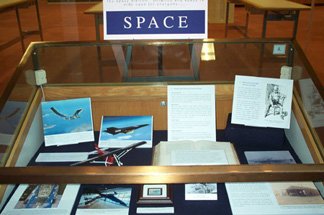