A New Battle of Karbala

Facing the existential threat of the Iraqi invasion, the struggling and militarily weak Islamic Republic deployed an immense propaganda campaign in order to convince Iranians to fight on the war front. Young men enlisted in the army and paramilitary forces, resulting in an estimated million casualties on the Iranian side alone. The war was devastating, and hence it needed to be given greater symbolic meaning. By depicting the ongoing war alongside the Battle of Karbala, wartime graphic arts sponsored by various government ministries and organizations imagined Shi’i sacred history as unfolding in the present. In so doing, poster arts were fitted into a larger symbolic framework of salvation by verbally and visually presenting the Iran-Iraq War as an extension and vindication of the Battle of Karbala. As a consequence, soldiers were encouraged to sacrifice themselves on the battlefield, their martyrial acts heralding the promise of salvation in the afterlife.

At this time, fighting for the Islamic Republic was conceived as a righteous reenactment of the Battle of Karbala. In 680 CE the Battle of Karbala resulted in the definitive sectarian split between Sunni and Shi’a Islam. In the wake of the succession crisis following the death of the Prophet Muhammad, the Umayyad ruler Yazid I sought to assassinate Husayn, the grandson of the Prophet Muhammad. Accompanied by his family and followers, Husayn fought Yazid on the plain of Karbala, where he was brutally murdered. For the Shi’ite community, Husayn’s death stands as the seminal act of martyrdom and the promise of salvation. As a prototype for self-sacrifice, Imam Husayn was the model to which Iranians aspired in their own modern-day Battle of Karbala.

Posters and other graphic media conflated the historical past with the present, as soldiers were repeatedly depicted as martyrs on the battlefield of Karbala. For instance, one poster entitled The Martyr depicts a blindfolded Iranian soldier being executed and thrust from this world into the next, where Imam Husayn and decapitated martyrs await him. The Islamic Republic thus successfully tapped into a larger Shi’a framework of salvation by verbally and visually presenting the Iran-Iraq War as a consecrated extension of the Battle of Karbala.

Belief in the salvific reward of a martyrial death is deeply entrenched in Shi’ite culture, and Khomeini employed this religious worldview as a means of urging all Iranian men to fight—and die—for both their religion and their nation. The pictorial arts visualized and consecrated official rhetoric by providing images of the heavenly consummation of martyrs as they are venerated for their sacrifice on earth. The poster Certitude of Belief metaphorically depicts the threshold between a soldier’s death on the battlefield and a redemptive Shi‘a paradise. By encouraging Iranian citizens to die for their country, and by promising individuals spiritual salvation through martyrdom, the Islamic Republic successfully secured its own survival during the war years. 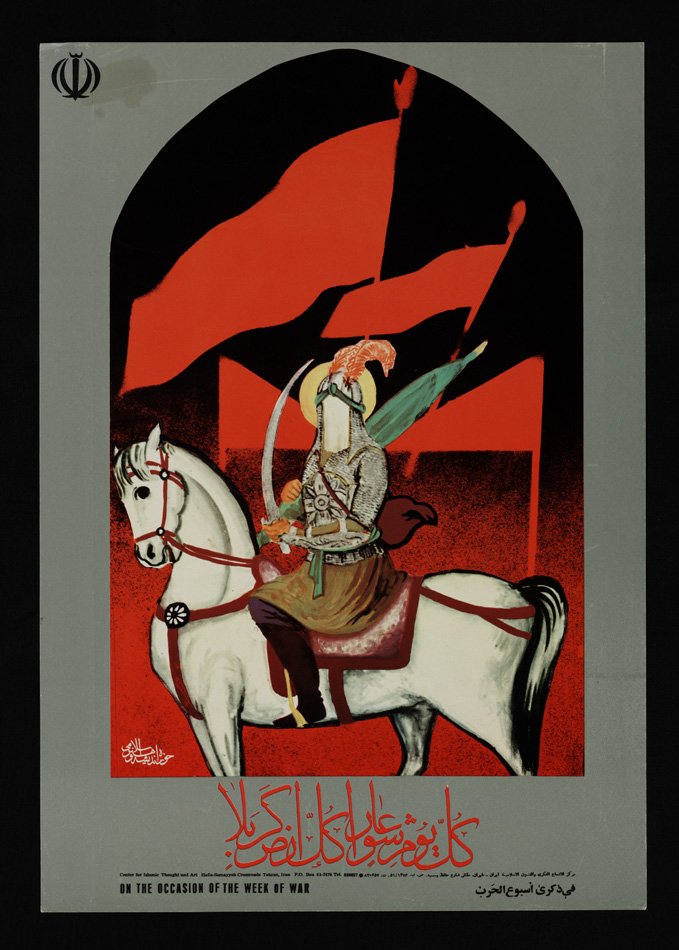 Every Day is 'Ashura and Every Soil is Karbala

This poster depicts Imam Husayn at the Battle of Karbala. Husayn's facial veil is indicative of his saintly status while also serving as a visual mechanism by which Iranians may insert themselves into his role at the Battle of Karbala. This interpretation is reinforced by the Arabic caption, stating that: "Every day is 'Ashura and Every Soil is Karbala." In emphasizing a battle scene, the poster utilizes the militaristic themes of 'Ashura to unite the war effort with Shi'i religious imagery. Moreover, by tying the historical Shi'i past to the present, the Islamic Republic employed Chalipa's painting to instruct Iranians to live everyday as if it were 'Ashura, thereby promoting self-sacrificial acts that would ultimately lead to salvation through martyrdom. 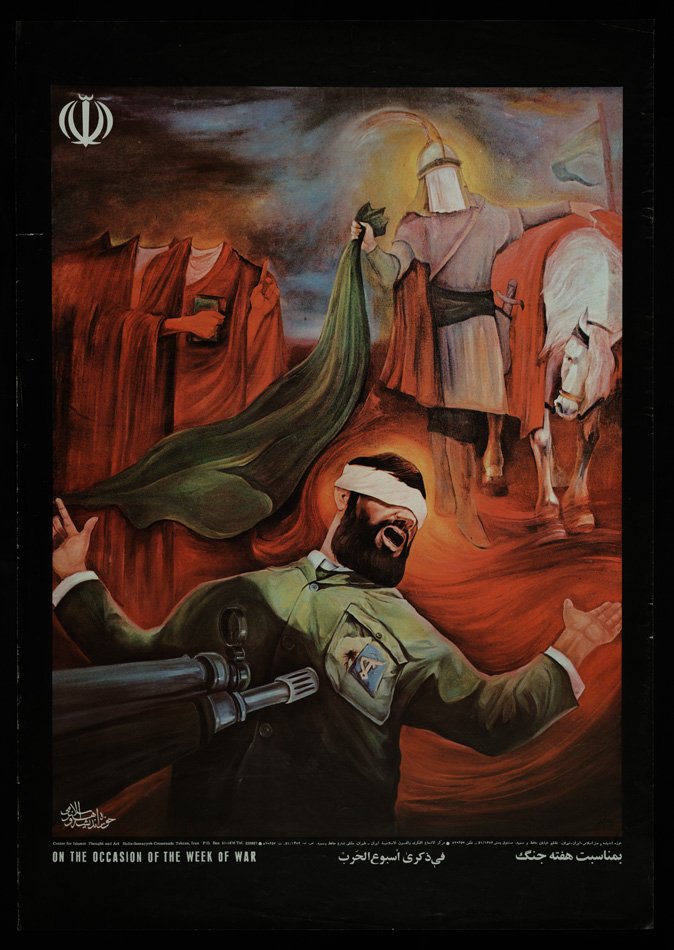 A blindfolded Iranian soldier is executed at point-blank range as Imam Husayn stands behind him, waiting to escort him into paradise. Next to the Imam are three headless figures—fellow martyrs that died alongside Husayn at the Battle of Karbala. The figure in the foreground holds a green Qur'an and points upwards with one hand, a gesture symbolic of witnessing or testifying to the unity of God. The strong contrast of the colors green and red carries deep symbolic meaning to Iranians, as red symbolizes the blood of Husayn and his fellow martyrs and green references both Muhammad and Husayn. The poster capitalizes on Iranian 'Ashura mourning rituals, which encourage soldiers to see themselves as following in the path of the Karbala martyrs.

On this theme, see Christiane Gruber, “Media/ting Conflict: Iranian Posters from the Iran-Iraq War (1980–88),” in Crossing Cultures: Conflict, Migration, Con-vergence, Proceedings of the 32nd Congress of the International Committee of the History of Art, ed. Jaynie Anderson (Melbourne: Melbourne University, 2009), 685. 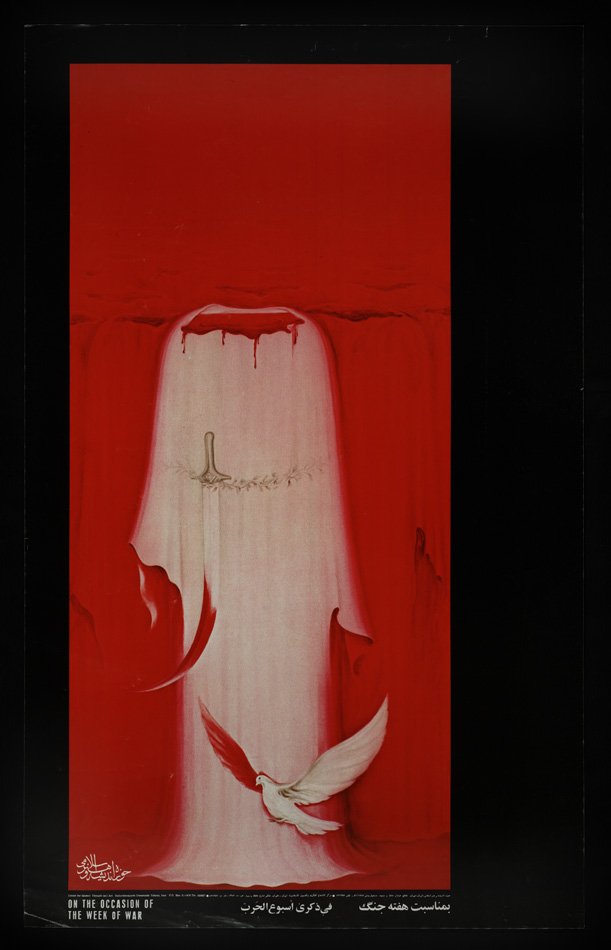 In this poster the headless figure of Imam Husayn, clad in a white robe, stands at the head of a mass of red-robed, decapitated figures who represent the seventy-two martyrs of Karbala. The red figures eerily disappear into a blood red sea, perhaps serving as a reminder of the eternal mourning of Shi'i Muslims for the losses suffered on that fateful day. In contrast, Imam Husayn's white robes stand out as symbols of martyrdom, purity, and paradise, which awaits all future martyrs. A dove swoops across near the bottom of the image, reiterating the future peace and bliss that is given to all those who sacrificed themselves for the Islamic Republic. 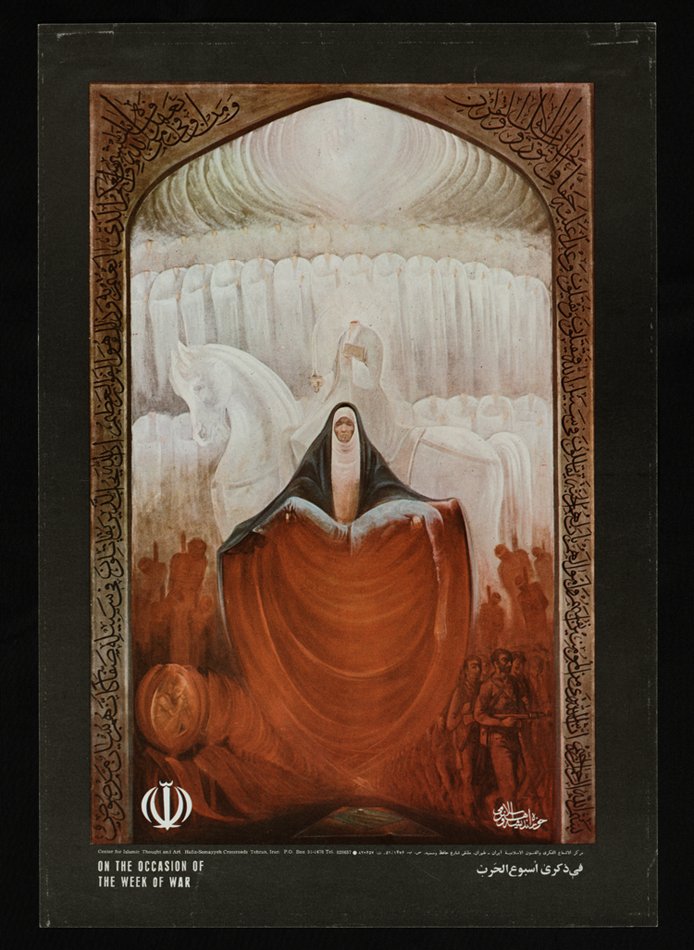 This painting depicts the salvific power of martyrdom according to Iranian Shi'i beliefs. A dead soldier's body transforms into a tulip—the symbol of martyrdom in Iranian Shi'i iconography—as his mother cradles him in a posture reminiscent of Christian Pietà scenes. To the mother's right is a row of tulips, sprouting embryonic soldiers, and on her left, adult soldiers march towards the battlefields, willingly heading towards their deaths. Behind the mother sits a white-robed Imam Husayn on his white horse. In the background, rows of headless figures represent the martyrs of Karbala. The painting encapsulates the cycle of martyrdom that the Islamic Republic propagated during the war. Iranians are depicted as born for martyrdom and are promised heaven and eternal paradise if they follow in the footsteps of Imam Husayn, sacrificing themselves for Shi'i Islam and the Islamic Republic. 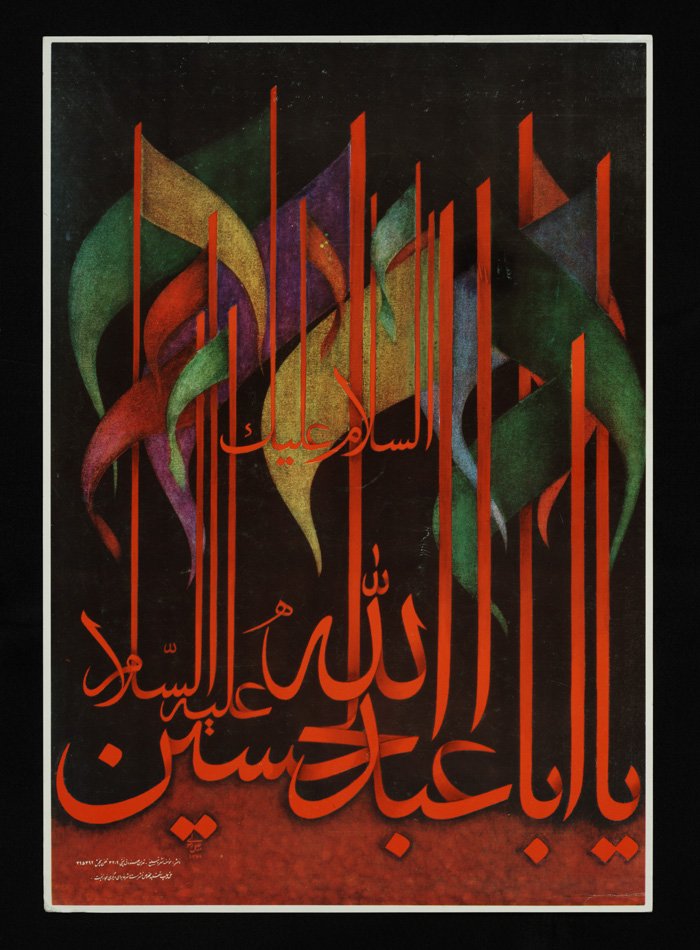 This poster displays the calligraphic arts as a subtle means to recall 'Ashura. The Shi'i supplications to Imam Husayn proclaimed at Karbala are written across the bottom part of the poster. The "lam" and "alif" letters stretch vertically into banner staffs. Banners of jewel-toned green, red, and gold gracefully wave across the black background, reminders of the banners carried by the Shi'is at the Battle of Karbala as well as by contemporary mourners during 'Ashura mourning processions. The image visually collapses the past and present through a continuity of ritual mourning, expressed here through calligraphic form. 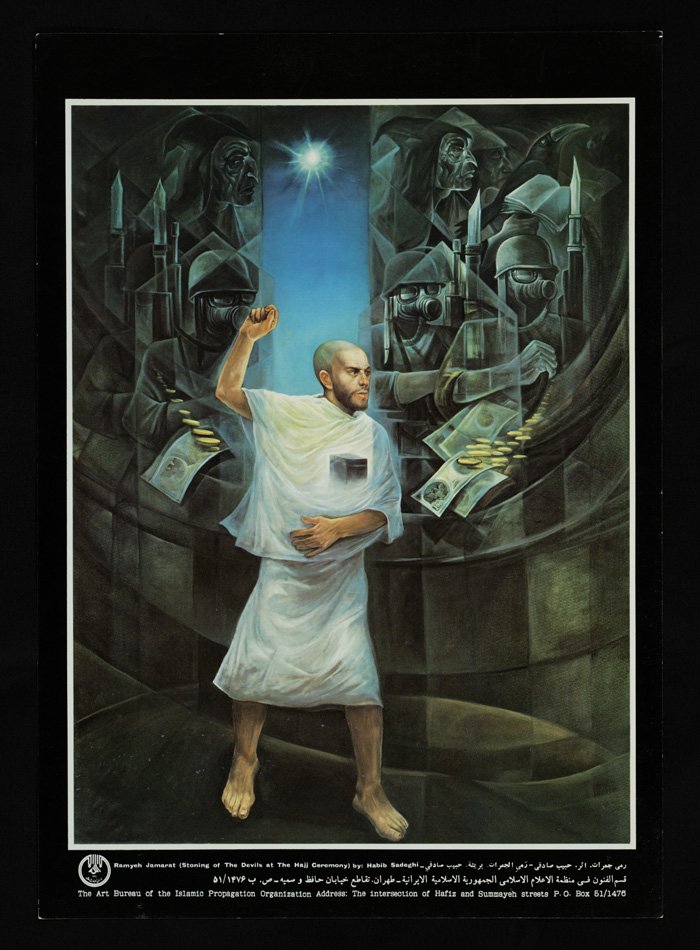 In this poster, a pilgrim on his way to Mecca pelts stones at the manifestations of evil surrounding him. His white robes and the Ka'ba in his heart symbolize his spiritual purity. The surrounding figures include soldiers concealed by gas masks, a raven, and black-hooded warlocks. Their characters represent evil, while gold coins and money stand for material temptation of the pilgrim. This scene of resistance and perseverance parallels the Islamic Republic's self-image as it sought to present itself as a liberator against the world's imperial powers, reclaiming Islam from its corruptors.