The 1979 Iranian Revolution was in many respects the culmination of repeated attempts throughout the twentieth century to install a democratic government in Iran. However, the definitive overthrow of the monarchy began in earnest in October 1977 with the death of Ayatollah Khomeini’s son, Mostafa, rumored to have been assassinated by security services. The first round of anti-government protests began in the religious city of Qom and slowly spread throughout Iran. From the uprising’s earliest days, Iran’s Pahlavi monarch, Mohammad Reza Shah, attempted to stifle public dissent, which resulted in several civilian deaths.

Following the Shi’ite custom of commemorating the deceased forty days after their death, activists organized mourning ceremonies across the country in honor of the slain protesters. These public ceremonies became the loci from which further protests developed. Growing exponentially, the cycle of violence and lamentation threw Iran deeper into chaos, which, eventually, turned into a nationwide civilian uprising. Public sentiment continued to grow against the Pahlavi regime in August of 1978, when a fire was set that burned down the Cinema Rex in Tehran, killing over four hundred people trapped inside.

Only a few weeks after this catastrophic event, the tide turned definitively against the government when, on September 8, 1978, government tanks and helicopters opened fire against thousands of protesters in Tehran, killing dozens. Known as Black Friday, the event was consecrated in revolutionary posters that depicted the bloody aftermath in the streets of Tehran while claiming the deceased as victims, martyrs, and pioneers of a just Islamic state. Black Friday was the pivotal event during the revolution and marked the beginning of the end of the Shah’s rule.

On January 16, 1979, Mohammad Reza Shah fled Iran, and on February 1, Khomeini returned from his exile in Iraq and Paris to be greeted by millions of cheering Iranians. Emerging as the clear leader within a power vacuum, Khomeini and his supporters worked quickly to consolidate power. Results from a referendum the next month declared the formal dissolution of the monarchy and the formation of the Islamic Republic of Iran. These swift changes were immediately celebrated in posters and other graphic media, as Iran’s printing presses were no longer controlled by the Pahlavi regime.

During the climactic period of civil unrest lasting from October 1977 to January 1979, protesters produced posters and pasted them on graffiti-scribbled walls. The resultant display of public dissent echoed the violence in the streets of revolutionary Iran. Several artists chose to recreate the chaotic urban landscape in their posters, which thus record the anti-imperial slogans and chants that were scribbled on walls, while also praising the chief ideologues of the revolution, including Ayatollah Khomeini and Ali Shariati.

Posters produced by the Islamic regime after 1979 reimagined the revolution as an ideologically Islamic one, even though it was a pluralistic uprising composed of both secular and religious groups. Shi‘ite Muslim rituals and symbolism, however, were key in sustaining revolutionary fervor. As a result, the artistic program of the newly formed Islamic Republic emphasized the Shi’ite aspects of the protests above all others in order to legitimize the newly formed government’s claims to spiritual authority and supremacy.

This poster gives us a glimpse of a public wall in Iran and how protestors used these spaces as a vehicle for political and religious dissent. Painted by an unknown artist, the wall depicts the ephemeral media of the revolution: a poster of Khomeini, a red stencil of ‘Ali Shariati, and slogans in graffiti. The graffiti is anti-American, anti-Russian, anti-Israeli, and anti-Shah. Walls were points of contention between the protestors and Pahlavi regime, as can be seen by the white smears of paint that attempt to erase earlier graffiti slogans. During the protests, injured or dying Iranians would use their own blood to write “Death to the Shah,” proof of their determination to see the Shah overthrown. Other protesters also would dip their hands in the blood of those slain or injured and use it to write slogans or to leave a handprint, such as the one in the upper left corner of the poster. This seemingly simple poster is in fact a highly charged tribute to the Black Friday massacre, an event often seen as the point of no return in the momentum towards the Iranian Revolution. On September 8, 1978, security forces opened fire on protestors in Zhaleh Square in Tehran, killing an estimated 84 demonstrators. The background of the poster depicts a map of Zhaleh Square with red ink splotches indicating where the massacre took place. The bilingual Persian-English text makes use of martyrial rhetoric, which lauds the importance of Shi‘i mourning rituals as vehicles for revolutionary fervor against the Pahlavi regime. The poster commemorates the Black Friday massacre by praising the victims as martyrs and pioneers of the future Islamic Republic. 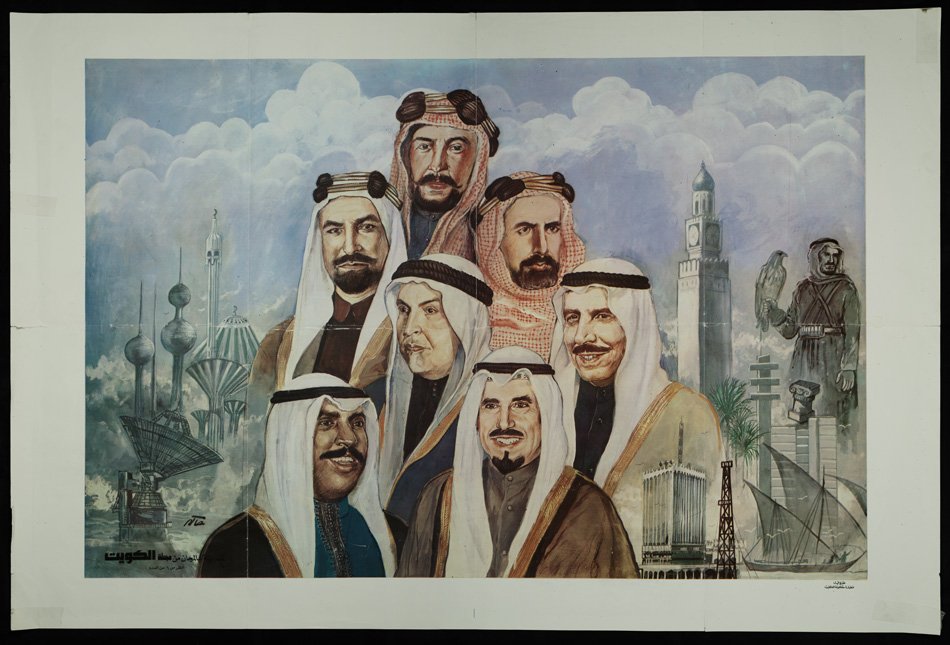 Commissioned on the second anniversary of the Revolution, this poster includes vignettes depicting events from the Revolution and the Iran-Iraq War. Some of the scenes include the toppling of the Shah’s statue, a group of young children holding up signs that read “Death to America,” battles between Iranian demonstrators and police tanks, and several revolutionary protests. In the lower right-hand corner is a rendering of the bombing of a southern city (possibly Khorramshahr). Religious undercurrents of the war can be glimpsed in the appearance of a central dove forming the word “shahid,” or martyr, as the inscription “the blood of children” falls from its beak. The participation of children—particularly young males—became one of the most memorable aspects of the Iran-Iraq War, as boys as young as 12-years-old were recruited (and often voluntarily enlisted) to join the war efforts. Thousands of boys died on the battlefields, believing that they would be rewarded in heaven for their sacrifice. This poster offers an early narrative of the Revolution and the war through a collage of naïve children’s drawings, produced before the physical and psychological pain of the war began to take its toll on Iranian citizens. Cry Out: The First Night of Muharram

During the year leading up to the overthrow of the Pahlavi regime, Shi'i public mourning ceremonies honoring the deceased for forty days became the platform from which protests against the government spread. This postcard reproduces a painting by Khusrawjirdi that depicts crowds mourning during the month of Muharram. At the forefront of the group, a man rips at his shirt, expressing the emotional anguish over the loss of Imam Husayn. These acts of self-mortification replicate the suffering of the seventy-two martyrs of Karbala. The energy of the crowds during the month of Muharram in 1978 and 1979 spilled over into protests that eventually turned into a popular uprising that toppled the Pahlavi monarchy. 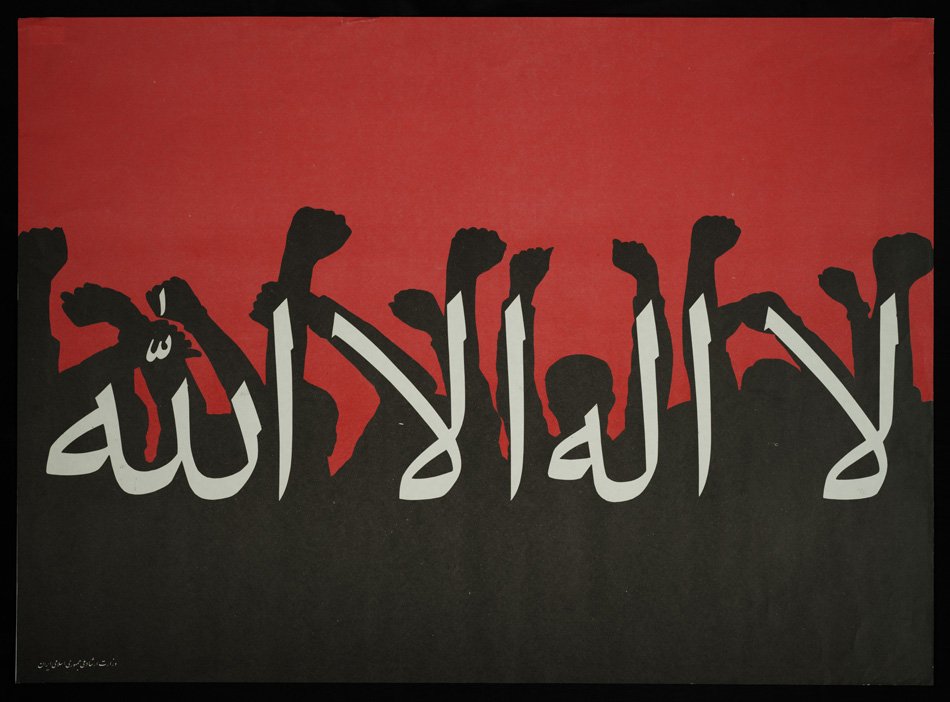 The body of this poster is formed by the shahada, or declaration that "There is no god but God," written against a silhouette of protestors with raised fists against a red backdrop. The crowd's collectively raised arms provide the outline for the calligraphic inscription. The stark colors of red, white, and black align the Iranian protestors within the visual culture of other liberation movements. Superposing this foundational creed on the protestors boldly declares that the Iranian people are religiously righteous in expressing revolutionary fervor. In this poster, a portrait of Khomeini hangs alongside a crowd of demonstrators. Out-of-focus fists thrust into the air as international symbols of defiance and resistance. Red bilingual text across the painted portrait of Khomeini reads “The U.S. Can Not Do Anything,” a statement addressed to both an Iranian and American audience. The banner thus vilifies the United States and its attempts to interfere in Iranian domestic politics. It also may be seen as a reference to the American hostages who were held captive during the 444-day siege of the United States’ Embassy in Tehran. “One-Year Anniversary of the Iranian Revolution”

In this poster commemorating the one-year anniversary of the Iranian Revolution, a giant fist contains a black and white photograph of demonstrators from the 1979 revolutionary protests. Referring to Khomeini’s triumphant return to Iran and the Shah’s overthrow and exile, the Qur’anic verse at the top metaphorically describes the revolution as a religiously consecrated battle of good (or “Truth”) versus evil (or “Falsehood”). This poster was produced for Iranian embassies and consulates in the United States before they were closed due to the takeover of the U.S. Embassy in Tehran and the resulting U.S. hostage crisis.