As the fighting raged on, all of Iranian society was urged to take part in the war effort. Posters played a vital role in mobilizing and consoling the Iranian people, including women and children. Iranian boys as young as twelve were recruited to join the Basij, volunteer paramilitary forces that fought alongside the national army. The Basij are most remembered for their human-wave assaults, in which young boys walked across the mine-ridden battlefields to clear them for military maneuvering. Within this deadly act of independence, defiance, and salvific frenzy was the very real desire of young Iranians to protect their homeland and families by any means necessary— including the sacrifice of both limbs and lives.

Artists commemorated the bravery of children in the war while also lamenting their tragic and untimely deaths. For instance, one poster, These Are Our Heroes, depicts a young boy preparing to join the battle; the grenades attached to his waist signal his eventual self- destruction in a human-wave assault, as his crying sister clutches the Qur’an. Graffiti writing on the wall behind the two figures exalts other boys as “leaders” who have already sacrificed themselves for the cause. The poster symbolizes a loss of innocence for the young generation, as well as for the nascent Islamic Republic itself.

Women also were targets of wartime propaganda. The Islamic Republic encouraged women to follow Islamic models of femininity and humility. One archetype of Shi‘a female virtue is Fatimah, the daughter of the Prophet Muhammad. Venerated as a symbol of righteousness, patience, piety, and as the mother of the foremost Shi‘a martyr, Imam Husayn, Fatimah is exalted as a mother to all martyrs. For these reasons, cemeteries created for Iranian soldiers killed during the Iran-Iraq War are named in her honor.

Another woman exalted by the Islamic Republic is Zaynab, the granddaughter of the Prophet Muhammad and sister of Imam Husayn. She is remembered as courageous and resilient due to her legendary defiance of Yazid I after the massacre of her family at the Battle of Karbala. As an active and even combative female, her example inspired Iranian women during the Revolution. During the war, too, the Islamic Republic’s artistic programs broadcast the image of Zaynab as a woman in support of Shi’a male soldiers.

Warfront artist Nasser Palangi produced sketches of Iranian women during the early Iraqi invasion of the Iranian city of Khorramshahr. Titling one of his drawings The Heirs of Zaynab, Palangi makes clear the connection between the seventh-century heroine and the women of Khorramshahr, who fought in defense of the Iranian city. The Battle of Karbala was once again turned into a living paradigm through which female combatants likewise could emulate the heroes of Shi’ite sacred history. 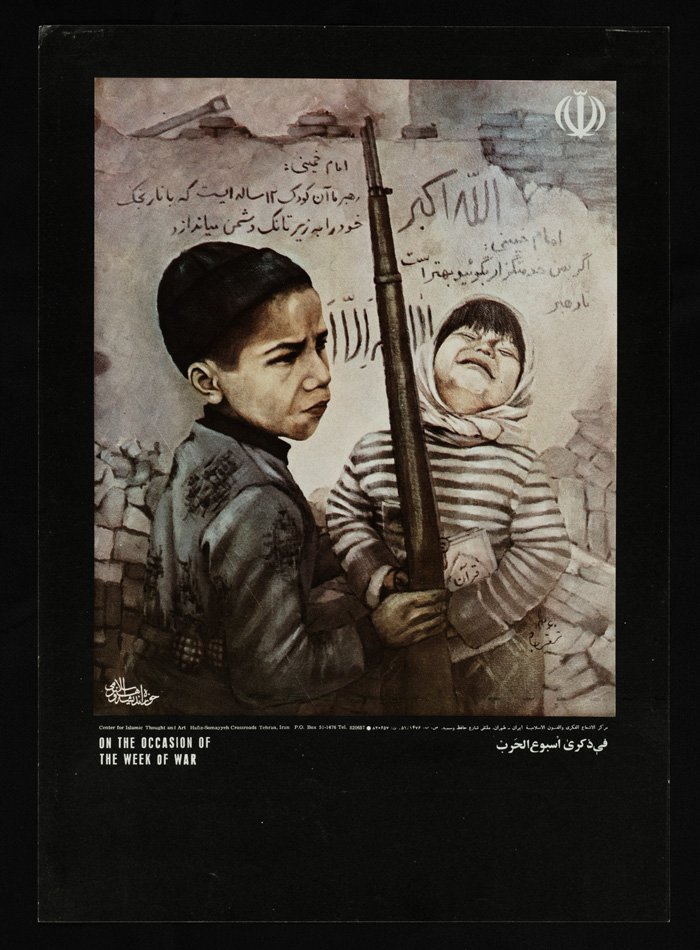 These Are Our Heroes

The Iran-Iraq War saw the enlistment of young Iranian boys who headed to the frontlines of battle. In this poster commissioned a year after the start of the war, a young boy is preparing the join the Iranian Basij, or paramilitary force. His look of determination and steadfast resolution is contrasted by his sister's mournful cries at the impending departure of her brother. Such an adult scene enacted by children symbolizes lost innocence: both for this young brother and sister, and also for the new Islamic Republic that had hardly finished celebrating the toppling of the Pahlavi monarchy before Iraq became a deadly threat. Graffiti on the whitewashed wall behind the children include pious declarations that: "God is Great" and "There is no god but God." Written in Persian graffiti are also quotations from Ayatollah Khomeini's speeches in remembrance of the young Basijis, to whom he stated: "It is better if you call me servant rather leader." 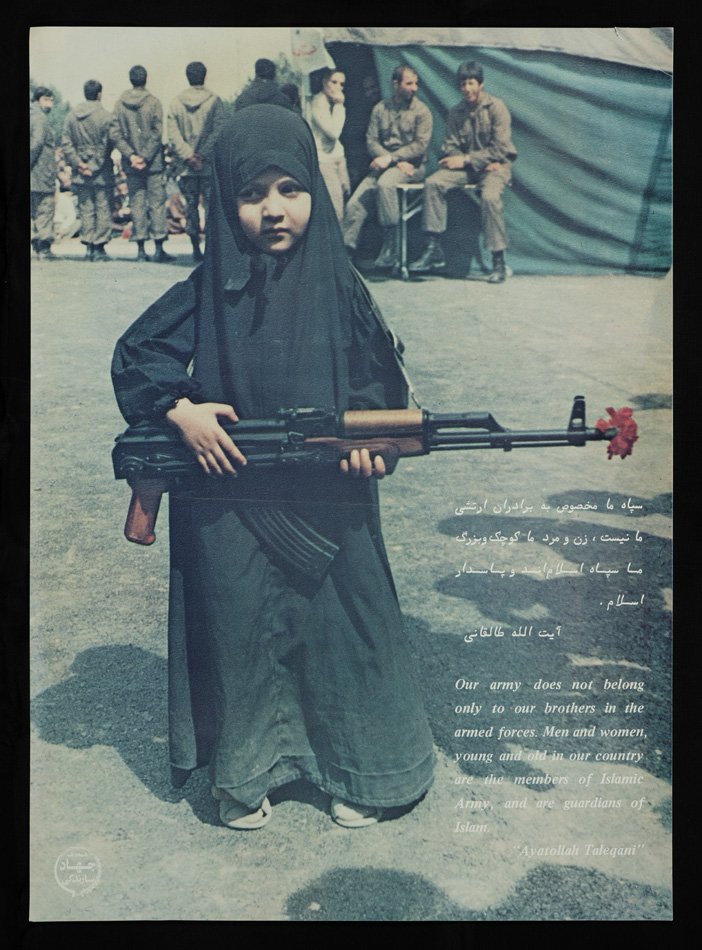 A photograph shows a young girl in full chador holding a Kalashnikov rifle with a flower inserted into its muzzle. The poster's caption includes a saying of Ayatollah Taleqani: "Our army does not belong only to our brothers in the armed forces. Men and women, young and old in our country are the members of the Islamic Army, and are the guardians of Islam." The Islamic Republic encouraged all Iranians to share responsibility for safeguarding their country, whether through fighting in the war, supporting the war effort, or what it perceived as defending Islam in the face of foreign aggression. As the young girl stands ready to defend her homeland, the group of soldiers behind her act as reminders of the readiness of Iran's soldiers to fight for the Islamic Republic. 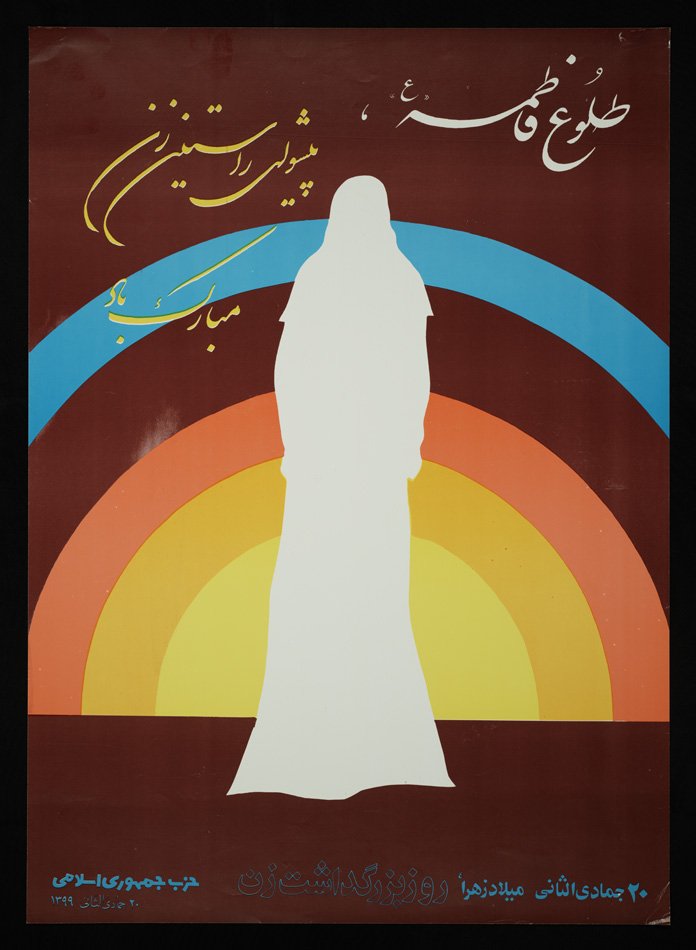 This poster was released in celebration of "Women's Day," corresponding to the birthday of Fatimah al-Zahra, the daughter of the Prophet Muhammad. The text states: "Fatimah's rising, celebrating the true leader of women." As a symbol of martyrdom, the color white denotes Fatimah as the "Mother of Martyrs" in her role as mother of Imam Husayn, and, by extension, to all who die in allegiance to the Republic. She is presented as a blank figure that encourages women to insert themselves in her place, possessing the universal qualities of Fatimah that all Iranian women were encouraged to emulate after the Revolution: piety, patience, and obedience. 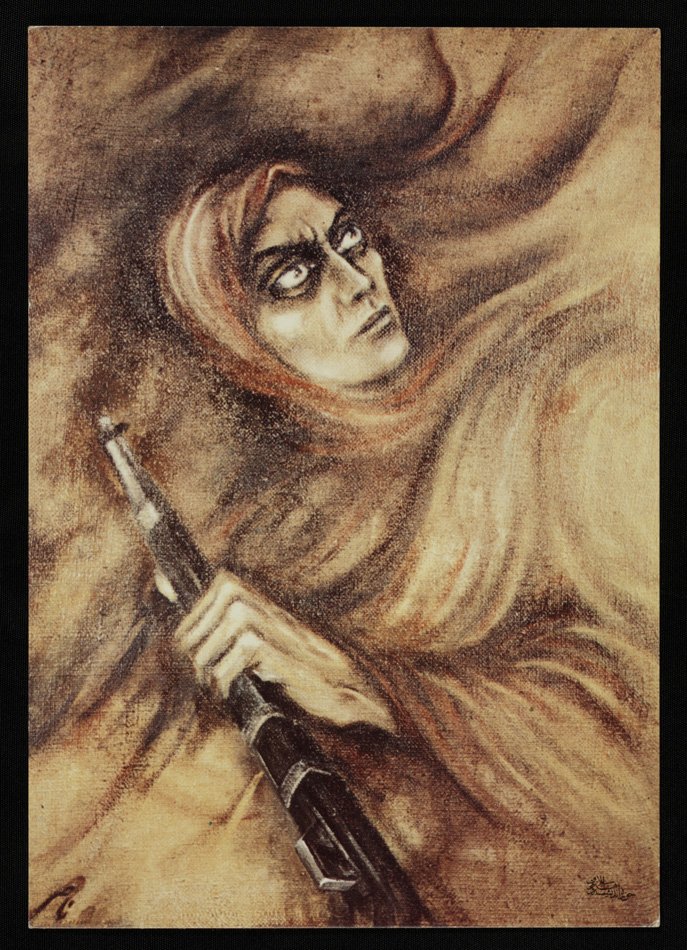 Daughters of the South

Faced with the Iraqi invasion of Khorramshar near the southern Iraqi border, the city's women famously aided male soldiers by carrying weapons to the front lines and providing aid and food to the injured despite continual attacks on the city. Throughout the entire Iran-Iraq war the only four Iranian women captured as prisoners of war were from Khorramshar. In his portrayal of a woman defending her hometown, Palangi captures the ignited zeal in this "daughter of the south" of Iran. More turbulent than the previous two sketches, the female figure's body vanishes near the painting's edges, disappearing into the destroyed cityscape of Khorramshar.