Collections & Exhibits > Exhibits > Homer in Print: The Transmission and Reception of Homer's Works > Homer and the Arts of the Book

Homer and the Arts of the Book

The Iliad and the Odyssey have inspired artists in all periods and mediums. The dramatic scenes and detailed descriptions invite visual representation and stimulate creative interpretation. Ancient artists depicted scenes from the Homeric epics on vases, wall paintings at Pompeii, and miniature marble Roman tablets. A handful of surviving illustrated manuscripts suggest the possibilities for illustrating and decorating the texts.

Since the sixteenth century, artists and sculptors have portrayed many scenes and characters from the Iliad and the Odyssey as both narrative and allegory. Giulio Romano, Peter Paul Rubens, Angelica Kauffmann, Nicolas Poussin, Claude Lorrain, Eugène Delacroix, Auguste Rodin, Georgio de Chirico, Henri Matisse, and Andy Warhol (after de Chirico) are just a few examples.

Early printers of Homer focused on making the texts of the epics available for study rather than producing expensive illustrated editions. It didn't take long, however, for printers to discover that illustrations could expand their audience and potential profits. Woodcuts adorned the 1526 Venice printing of the Iliad translated into modern Greek by Nicolaos Loukanēs, which is also the first translation into any vernacular language. By the mid-sixteenth century engravings – more expensive to produce but capable of far greater detail – were the graphic medium of choice for large-format, luxury editions such as those by John Ogilby, Alexander Pope, and William Melmoth. The Iliad and the Odyssey also attracted printers who were interested in creating beautiful books or testing the limits of their craft. The miniature type in William Pickering's edition and the stark contrasts between thick and thin of the letterforms in Giambattista Bodoni's may not be attractive or readable, but they are amazing feats of typography.

With the late-nineteenth-century revival of fine printing and the emergence of books illustrated by artists, the Homeric texts became frequent source materials for limited editions and artists' books. Examples in this case and elsewhere in the exhibition confirm that Homer is an inexhaustible source for printers and artists. Bodoni submitted his proposal for a polyglot edition of Homer in Greek, Latin, Italian, and French to Napoleon eight years before the publication of his magnificent Iliad. There is no evidence of any response and the proposed edition was never printed. Printed in 4½ point type, this miniature edition of the Iliad and Odyssey is remarkable for its high production quality and the clarity of its printing. William Pickering can be credited with several important developments in book production, most of all through his attention to quality typography and his pioneering use of cloth for bookbinding. T. E. Lawrence, better known as Lawrence of Arabia, published this prose translation under the pseudonym T. E. Shaw, which he had used to enlist in the Royal Air Force, to avoid attracting the attention of the press. Book designer Bruce Rogers commissioned Lawrence to write the translation after reading his Seven Pillars of Wisdom. Lawrence had studied Greek and worked as an archaeologist at the Hittite city of Carchemish. Lawrence intended his work to be "a straightforward translation" of what he described as "the first novel of Europe." Critics praised the beautiful book but not the translation. American printer and book designer Joseph Blumenthal declared, "In the Odyssey, with complete simplicity, without tricks or accessory decoration, with a classic austerity akin to the timeless proportions of the Parthenon, with only type and paper and ink, with consummate skill, Rogers created a masterpiece." 
Homer His Iliads Translated, Adorn'd with Sculpture,
and Illustrated with Annotations
London: Printed by Thomas Roycroft, 1660.

Achilles Peleus Son's destructive Rage
Great Goddess! sing, which did the Greeks engage
In many woes

This sumptuous volume contains a translation of the Iliad in rhyming heroic couplets by the Scottish translator, publisher, and geographer John Ogilby. Ogilby acted as his own publisher, developing very successful and innovative strategies to cover the substantial production costs. For a fee of £12 (£5 on subscription, £5 on receipt of the Iliad, and £2 on receipt of the Odyssey), subscribers could have their names, arms, and titles included on one of the full-page illustrations engraved by Wenceslaus Hollar. Other subscribers paid £6 for the two volumes; anyone who brought in orders for five copies received a free set; and Ogilby disposed of unsold copies by lottery. The illustrations were highly praised and Alexander Pope, who remembered being inspired by Ogilby's editions when he was eight years old, incorporated many of the designs into his own Iliad. Achilles Peleus Son's destructive Rage
Great Goddess! sing, which did the Greeks engage
In many woes

English sculptor John Flaxman was commissioned to prepare drawings for the Iliad and the Odyssey while he was in Rome. He executed a series of outline designs, similar in style to Greek vase paintings, which were engraved by Tommaso Piroli. Piroli produced two sets of plates, one of which was used to publish the first editions in Italy in 1803. The other set was shipped to England for publication. The Iliad plates were published in London in 1795; the Odyssey designs, which never arrived and are presumed to have been seized by the French, were re-engraved by William Blake. This edition of both series includes new designs by Flaxman for the Iliad and the Odyssey. Georges Rochegrosse, a successful painter who exhibited at the Paris Salon, often depicted highly dramatic historical scenes from the Bible and mythology. He also had a career as a printmaker and illustrator of literary works. This deluxe copy of nineteenth-century French poet and writer Leconte de Lisle's translation has several versions of the illustrations in black-and-white etchings and watercolor. 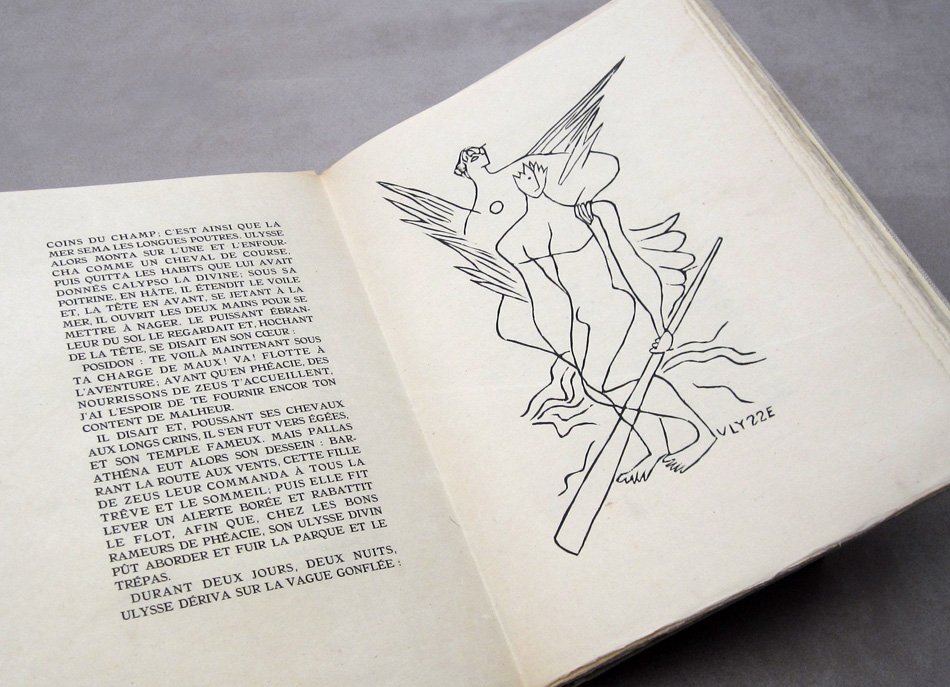 Diplomat, politician, and scholar Victor Bérard published his prose translation of the Odyssey in 1924 as part of the Collection Budé, a French series comparable to the Loeb Classical Library. Fourteen wood engravings by French artist Henri Laurens, best known as a sculptor, illustrated this deluxe edition. German professor of classical philology Wolfgang Schadewaldt's translation of the Odyssey was first published in 1958 and frequently reprinted. This edition reproduces lithograph illustrations produced by Marc Chagall for an artist's book edition of Madame Dacier's translation, published in 1975.