Collections & Exhibits > Exhibits > Integrating the Life of the Mind: African Americans at the University of Chicago, 1870-1940 > A credit to the race or a race man? Studying Science

A credit to the race or a race man? Studying Science

As African Americans made their way into institutions of higher learning in the late 19th and early 20th century, they sought to satisfy individual intellectual curiosities but also inevitably faced the question of what it meant to be a member of a minority group and to pursue a PhD.

While each of these alumni had his or her own intellectual reasons for choosing a particular course of study, each student inevitably also sought to explain how his or her attainment contributed to the advancement of African Americans. This question generally settled into two alternatives. Did the scholar view him or herself as a credit to the race or as a race man or woman?

In the early 19th century the segregationist Senator John C. Calhoun had said that “if he could find a Negro who knew the Greek syntax, he would then believe that the Negro was a human being and should be treated as a man.” In 1881 William Scarborough, the first African American to join the Modern Language Association, published First Lessons in Greek, a textbook used in several colleges and universities. By proving what he, a black man, could accomplish, Scarborough sought to be a credit to his race.

By contrast,  Monroe Nathan Work was a “race man.” He took up as his scholarly theme sociological issues relating directly to African American experience. His first publication was, “The Negro and Crime in Chicago” (1901), and in another term paper, “The Importance of Sociology to the Negro,” Work argued that “no group suffered more because of lack of knowledge concerning themselves.” Work consequently “dedicated his life to the gathering of information, the compiling of exact knowledge concerning the Negro.”

As you will see in cases 21-23, African American scientists in the early 20th century tended to think of themselves as being “a credit to their race” and sociologists were more likely to be “race men” while historians and philologists merged the two approaches. 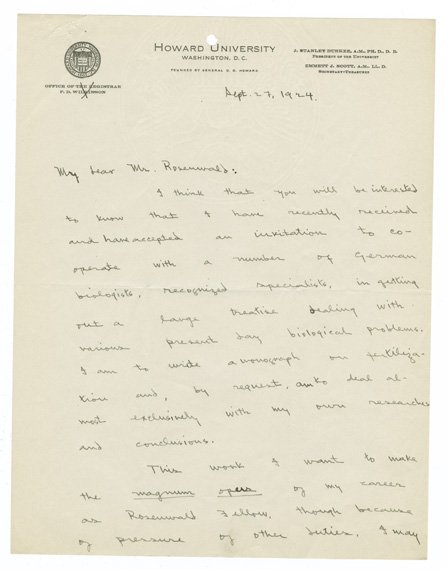 Here, Just describes a recent honor as “the unique compliment that comes to an American Negro—the first of its kind I believe.”