Lorenzo Dow Turner was the first African American to earn a PhD in English at the University of Chicago.

Born in 1895 in North Carolina, he earned a BA from Howard in 1914 and an MA in English from Harvard in 1917. He immediately began teaching at Howard, serving as the chair of the Department of English from 1917 to 1928, while also working toward his PhD at the University of Chicago. Writing a dissertation on anti-slavery sentiment in American language prior to 1865, he earned his PhD in 1926.

Shortly after completing his doctorate, Turner moved from Howard to Fisk University, where he remained as chair of the Department of English until 1946.

The major publication of his scholarly career was Africanisms in the Gullah Dialect (University of Chicago Press, 1949). A linguist, Turner’s project in this book was to unearth the African origins of an African American dialect that previous scholars had taken to be simply “bad English.” His research work for the project took him to the Sea Islands off the coasts of South Carolina and Georgia (1932-33), Brazil (1940-41), London (1936-37), and Paris (1937). The book continues to be valuable to scholars today.

At Fisk, Turner designed one of the first programs in African Studies and in 1946 he took up a position at Roosevelt University in Chicago as Chairman of a new African Studies Program. Turner retired from Roosevelt in 1970 and died in 1972. 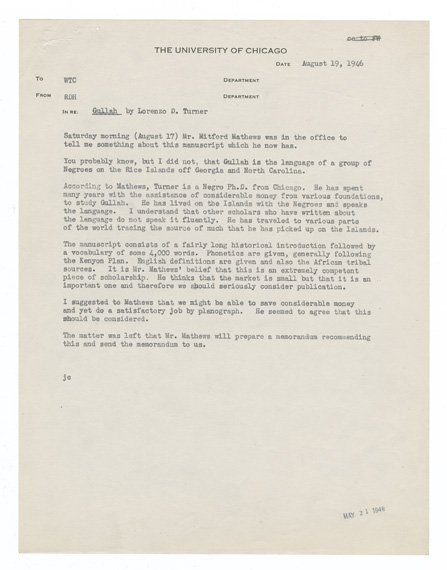 The memo’s topic is the manuscript of Lorenzo Dow Turner’s Africanisms in the Gullah Dialect.