Collections & Exhibits > Exhibits > Integrating the Life of the Mind: African Americans at the University of Chicago, 1870-1940 > Future Intellectuals: Monroe Nathan Work (AB 1902, AM 1903)

Monroe Nathan Work was born in 1866 to ex-slaves. The need to work to support ill family members slowed his schooling. He started high school at the age of 23 in Kansas and, upon completion, tried his hand as a teacher, preacher, and farmer before determining to enter seminary in Chicago.

After completing a theological degree in 1898, he entered the University of Chicago where he took an AB and AM in Sociology in 1902 and 1903. During this time, he published "The Negro and Crime in Chicago," the first scholarly article by an African American to be published in the American Journal of Sociology (1901).

At the University of Chicago Work acquired a belief in facts and rigorous scholarship as a foundation for social progress. In his work as a mature scholar, he straddled the line between W. E. B. DuBois and Booker T. Washington in their debate over whether a liberal or vocational education would do most to advance the cause of racial equality.

In 1908 Work took a position as founding Director of a new Department of Records and Research at Washington's Tuskegee Institute and from that position aggressively advanced empirical research into African American experience. Work's major publication, the annual Negro Year Book, cataloged a remarkable array of demographic details about early 20th century African American life. Importantly, these texts also catalogued lynching statistics and, in so doing, finally helped focus the attention of American citizens on this problem.

Work served in this capacity at Tuskegee until retirement in 1938 but remained at the Institute continuing his work until he died in 1947. 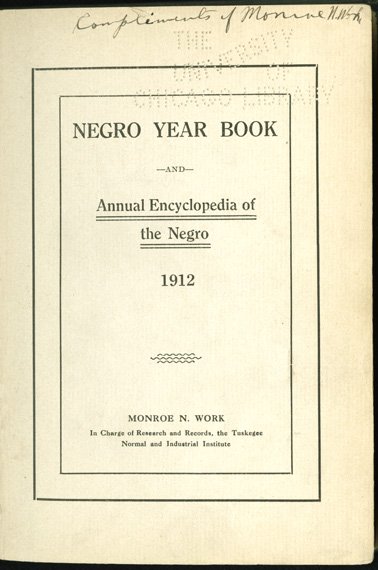 Negro Year Book, an Annual Encyclopedia of the Negro