Collections & Exhibits > Exhibits > Integrating the Life of the Mind: African Americans at the University of Chicago, 1870-1940 > Models & Mentors

By the time Cora Bell Jackson enrolled at the University of Chicago in 1892 distinguished African Americans had already long been making strong, public arguments about the value of education to African Americans. They had also exhibited that value through their own achievements. Both Frederick Douglass and Booker T. Washington had been born in slavery yet achieved great distinction as intellectual and political leaders.

At a White House reception after Abraham Lincoln’s Second Inaugural Address, Douglass was at first refused entrance. When admitted and greeted by the President, Lincoln did not merely shake his hand and let him go but tried to speak with him. According to his own account, Douglass tried to break the greeting, indicating that many other people were waiting to greet Lincoln. But Lincoln held him and asked him what Douglass had thought of the speech earlier that day for, Lincoln said, he valued no one’s opinion so much as Douglass’.

Not born until 1868, but in 1895 the first African American to earn a PhD at Harvard, W. E. B. DuBois would join the ranks of Douglass and Washington and with them frame the public conversation about race and education. What sorts of educational institutions were needed to advance the cause of racial equality and liberate African Americans from conditions of oppression?

The intellectual and institutional contributions of these three revered figures shaped the world in which African American students of the early 20th century cut their own course. Faculty at the University of Chicago requested that the flag be lowered to half mast when Douglass died. Booker T. Washington lectured at the University in 1910.

But these students often also had close, personal connections to these illustrious men. Upon his graduation, Work would have to make decisions about whether to ally himself with Washington or DuBois. Georgiana Simpson knew Douglass and was raised in the house of his widow in Washington, D.C. 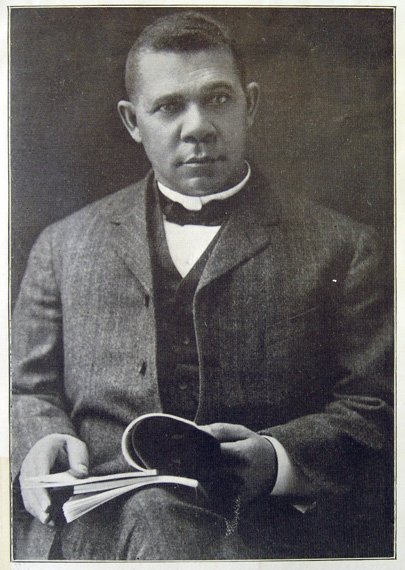