Collections & Exhibits > Exhibits > Integrating the Life of the Mind: African Americans at the University of Chicago, 1870-1940 > Strategies for Coping with the Social Issue

Strategies for Coping with the Social Issue

In the early 20th century the University of Chicago welcomed African American students intellectually but not socially.

Yearbooks from the earliest years provide no evidence that African Americans participated in campus activities. These students appear to have been fairly isolated. They often took leaves of absence, also indicated on their transcripts, in order to work and build up their savings to support their studies. And quite commonly, as their transcripts indicate, these students did most of their coursework during the summer.

In the 1920s and 1930s we begin to see a change. By the end of the 1920s yearbooks show an interracial club and we see African American students participating alongside white students in other clubs, for instance the Spanish Club and the Y. W. C. A. (see Social Question – Round Two section).

Moreover, in the 1930s and 1940s an interracial artistic milieu grew in the vicinity of the campus, connecting students to a broader social network off-campus of artists participating in institutions like the Southside Community Arts Center and the writing workshops held at the George Cleveland Hall Branch of the Chicago Public Library.

In these contexts, students like Katherine Dunham, John Pratt, and Marian Minus collaborated with fellow artists like novelist Richard Wright, poets Margaret Walker and Langston Hughes, and artist Charles Sebree. 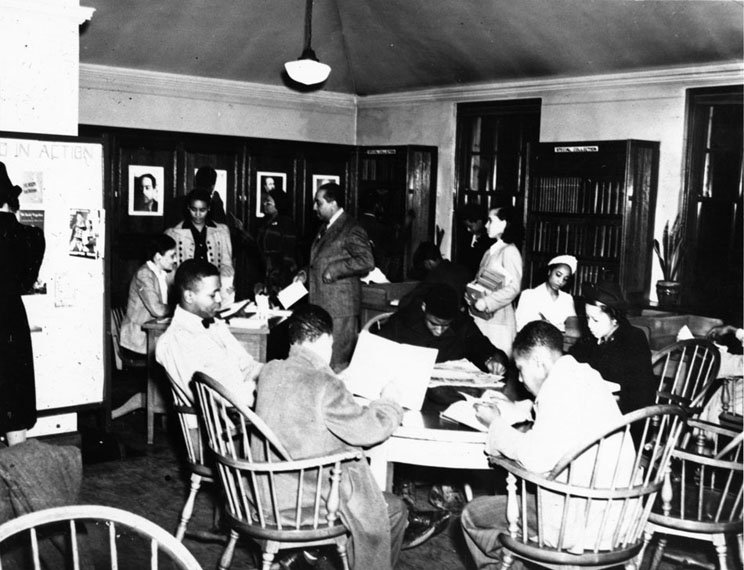 Librarian Vivian Harsh (MLS 1931) who oversaw the George Cleveland Hall Branch of the Chicago Public Library encouraged African American artists to gather and collaborate in this space. Similarly, Albert Dunham started a theater group that performed in the Harper Theater. And in 1940 Eleanor Roosevelt would cut the ribbon on the Southside Community Art Center, which soon became the center of African American artistic production in Chicago.