A Library for All Time

The History of the John Crerar Library

Collections & Exhibits > Exhibits > A Library for All Time: The History of the John Crerar Library > Collection Highlights

From the time of its incorporation in 1894, the John Crerar Library sought to create a collection of distinction within its scope as a scientific and technical reference library. The original scope was defined as (1):

"A free reference library and a library of science, containing books which may be classed under the head of popular science, practical science, and applied science, and at the outset, supplied with a collection of reference books essential to all libraries, such as encyclopaedias, dictionaries, atlases, charts, bibliographical works, catalogues, histories, and the English classics, and that there be departments of social science, architecture, civil and mechanical engineering, and astronomy."

After input from a variety of experts and under the leadership of the first Librarian, Clement W. Andrews, the scope of the collection was expanded to include natural, physical and social sciences and their applications (i.e., all aspects of technology). Andrews began with a copy of the accession lists of Massachusetts Institute of Technology and Harvard University libraries as a guide for the Crerar Library. He also visited a number of other libraries, and compiled lists of periodicals for purchase.  Purchasing was begun in late 1895 after an Assistant Librarian (Anderson H. Hopkins) and an order clerk (Editha Phelps) were hired.  The collections were also greatly enhanced by the transfer of about 8000 books in the natural sciences and useful arts from the Newberry Library. This cooperative venture was the direct result of the earlier planning and negotiation among the three Chicago libraries to collaborate rather than compete by each taking different subject approaches to collecting. Eventually the medical collections of the Newberry Library (including the distinctive collection donated by Nicholas Senn) were also transferred to the Crerar Library in 1906-07. Under Andrews administration, a principle was also established that new books would be acquired in proportion to the use of existing collections.

Throughout its history, much of the reader demand for and use of collections focused on the most up-to-date information and the newest editions of works. However, the Crerar Library and its staff recognized the historical value of its collections from the very beginning of the library, according to Crerar chronicler J. Christian Bay (2):

"Many readers and even scholars would take it for granted that we discarded older editions when new and improved ones would appear, yet this never has been practiced, even though it might have proved economical."

This philosophy collecting has remained intact, resulting in a rich historical collection of materials in the John Crerar Library. Scholars interested in various areas of the history of science and technology, and especially in late nineteenth- and early twentieth-century engineering, manufacturing and applied arts, make extensive use of these collections. In addition to the regular collections, over the years the Crerar Library built strong holdings in incunabula and other rare and special collections. Works came to the library in collections acquired as a whole by purchase or gift, others selected and purchased individually. An historical account, year by year, of special purchases is given by Bay and tells the story of the building of a remarkable collection. (3)

Starting in 1948, under the direction of Director Herman Henkle, the Crerar Library collecting scope was revised to eliminate social sciences. This major change resulted in significant sales and transfers to libraries and book dealers.

In the 1980's, the merger of the John Crerar Library with the University of Chicago brought together two exceptional and complementary collections to create one of the finest science libraries in the world. In the intervening years, the collections have continued to be built and enhanced through regular and special acquisitions, including the notable 2009 purchase of the Stanton A. Friedberg M.D. Rare Book Collection from Rush University Medical Center. The John Crerar Library today is home to more than 1.4 million volumes in the biological, medical and physical sciences as well as collections in general science and the philosophy and history of science, medicine, and technology. 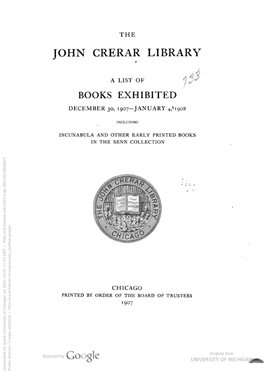 A list of books exhibited December 30, 1907—January 4, 1908, including incunabula and other early printed books in the Senn collection