the Evolution of Medicine at the University of Chicago's Hospitals

Collections & Exhibits > Exhibits > Past, Present, Future: the Evolution of Medicine at the University of Chicago's Hospitals > Hospital Buildings

Between 1953 and 1975 five additional departments were formed and included radiology, psychiatry, anesthesia, ophthalmology and neurology. At the same time clinical operations added a number of hospitals and facilities including the Argonne Cancer Research Hospital, supported by the Atomic Energy Commission as well as the Surgery Brain Pavilion, both at Ellis Avenue and 58th Street. The Surgery Brain Pavilion added operating rooms for the department of surgery and expanding the neurological sciences and neurology research.

By the 1970s it was clear that the original Billings hospital was becoming outmoded and a new facility was needed. The dramatically modern Bernard Mitchell Hospital opened in 1983 to keep pace with changing times.

The need for more modern facilities for children precipitated the building of Wyler's Children's Hospital, which opened in 1967, to replace the old Bobs Roberts Hospital. Recently, the requirements for state of the art pediatric care led to the opening of the Comers Children's Hospital in 2005.  The hospital was generously funded by its namesake Gary Comer, the founder of Land's End, who grew up just south of Hyde Park.

In the early part of the 20th century, the University of Chicago and Rush medical students rotated through several outpatient clinics- then called dispensaries. In 1927, the original Max Epstein outpatient clinic was opened, located just next to the Billings hospital. In 1995 the Duchossois Center for Advanced Medicine, or DCAM as it is known, was opened. Funded with the generous support of the Duchossois family, the facility incorporates clinical outpatient care, outpatient surgery and conference rooms for medical education.

The New Hospital Pavilion is currently under construction and promises to expand specialty care at the medical center and meet the technological requirements of state of the art medical care.

The current medical school class, the class of 2015, looks forward to the future. The new pavilion will provide the most cutting edge training for these new doctors as they begin their career in medicine. 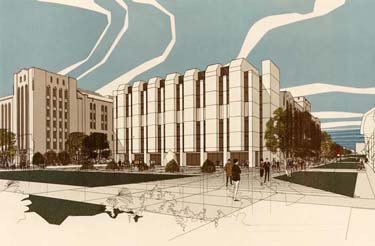