the Evolution of Medicine at the University of Chicago's Hospitals

Collections & Exhibits > Exhibits > Past, Present, Future: the Evolution of Medicine at the University of Chicago's Hospitals > The Medical School

The medical school was founded in 1898 in conjunction with the Rush Medical College. An emblem of the college is still located over the arch in Abbott Memorial Hall. Students were admitted jointly to both the University of Chicago and the Rush Medical College with the understanding that the first two years would be here on campus. The second two, the clinical years, were located at the Rush Medical Center campus with clinical work done at their affiliated hospitals such as Presbyterian and Cook County Hospitals. In 1904, the expectation of a fifth year, either for an internship or research, became a requirement for graduation.

In 1927 the Albert Merritt Billings Hospital opened and students could do all of their training on the Hyde Park campus. By 1941, the arrangement with Rush had been formally severed. From 1947-1967, all clinical training took place on the University campus. A formal affiliation with the now closed Michael Reese Hospital in 1969 was the first in a long series of academic affiliations where clinical training was provided off campus.

In 1968, a 12 million dollar donation from the generous Pritzker family led to a formal name for the medical school: The Pritzker School of Medicine. The capstone for the medical school was the opening of the Biological Sciences Learning Center (BSLC) in 1993, the definitive and well designed home for the Pritzker School of Medicine. The BSLC offers state of the art classrooms and laboratories and is designed to house research and teaching under one roof. 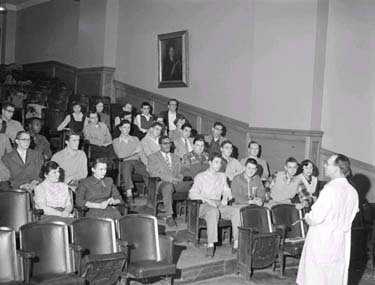 Medical Students in a Lecture Hall