“I don’t have big paws like Oscar [Peterson] or a nice, big stretch like Benny Green’s…I have to create illusions, make it sound like I’m doing something I’m not.”

Internationally known Jazz pianist and Hyde Park resident, Willie Pickens was known for his bombastic style and thunderous sound, paired with a melodic and harmonic ingenuity and versatility. (1) He was born in Milwaukee, Wisconsin. One of six children, his mother, Minny Hall, was a pianist who exposed him to music at an early age. Young Willie took to the piano early, practicing for hours at a time as a boy. He attended Lincoln High School with alto saxophonist Frank Morgan. During the same time, Pickens met jazz trumpeter Jabbo Smith, who taught him about chords and harmony, and studied at the Milwaukee Conservatory, where he learned expertise in other instruments. After high school, Pickens joined the U.S. Army and played clarinet in the Army band.

He graduated from University of Wisconsin-Milwaukee in 1955, with a BA in music education, and soon after moved to Chicago. In Chicago, Pickens found his place among the jazz community, in which he would excel as a musician, a teacher, and a mentor. “Pickens arrives on the Chicago jazz scene in 1958 and immediately drew attention with his freewheeling style. At a time when one-handed piano playing was in vogue, Willie Pickens cooked with both hands.” (Ray Suarez, “Remembrances,” December 17, 2017, WBEZ Chicago.) He started by sitting in on Joe Segal’s jam sessions (2), where he met Irma Jean Burrell. They married in 1959. Irma was considered Willie’s ambassador to the Chicago jazz scene. They were a devoted couple, who were together until Irma’s death in 2015.

“Willie Pickens was one of the foremost piano players in jazz…He had technique, the knowledge of the instrument and jazz in general…Although he wasn’t tall, he was a gentle giant.” (Ramsey Lewis in Howard Reich, “Chicago piano titan Willie Pickens dies at 86,” Chicago Tribune, December 13, 2017.) Pickens achieved international acclaim with his piano work on Eddie Harris’ hit recording “Exodus,” from the gold record “Exodus to Jazz,” released by Chicago-based VeeJay records in 1961. (3) Pickens worked with Harris until 1966. During his career, he toured with Joe Henderson, Clark Terry, Wynton Marsalis, Quincy Jones, Louis Bellson, Bunky Green, and Red Holloway. He appeared regularly at the Chicago Jazz Festival and the Hyde Park Jazz Festival.

In 1990, drumming great Elvin Jones invited Pickens to tour with the Elvin Jones Jazz Machine. He originally planned to take a sabbatical, but Irma Pickens urged him “Just retire and go out on the road.” (Howard Reich, “Pickens playing Orchestra Hall with a heavy heart,” Chicago Tribune, February 17, 2016.) Pickens released his recording debut as a trio leader with his 1998 album “It’s About Time” on Southport Records (4). “His trio consisting of Larry Gray on double bass and Robert Shy on drums is one of the finest modern-jazz rhythm sections in Chicago.” (Deborah Gillaspie, “Pickens, Willie [L.],” Grove Music Online.) The Church played an important role in both his music and career. Pickens reimagined sacred songs in his 2006 release “Jazz Spirit: Volume 1 and 2” (5) and oversaw an annual Christmas benefit concert at his own Hyde Park Union Church.

Willie Pickens was a devoted teacher and mentor. He mentored the likes of Michael Harris of Earth Wind & Fire and Kenny Anderson of the Ohio Players as well as his daughter, Jazz pianist Bethany Pickens. (6) He taught in Chicago high schools from 1966-1997, including launching the music program at Hyde Park’s Kenwood Academy in the 1960s. Bethany Pickens currently teaches in this program. In 1995, he became a founding member of the Ravinia Jazz Mentor Program, and in 1997 joined the faculty of Northern Illinois University’s School of Music.

Willie Pickens passed away on Tuesday, December 12, while practicing for a “Jazz at Lincoln Center” show at Dizzy’s Club Coca-Cola in New York. In the words of his daughter, Bethany Pickens’ announcement (7), “Dad left this earth today in New York at Lincoln Center (Dizzy’s) after practicing heading to Sound Check! Now he’s with my Mom!” 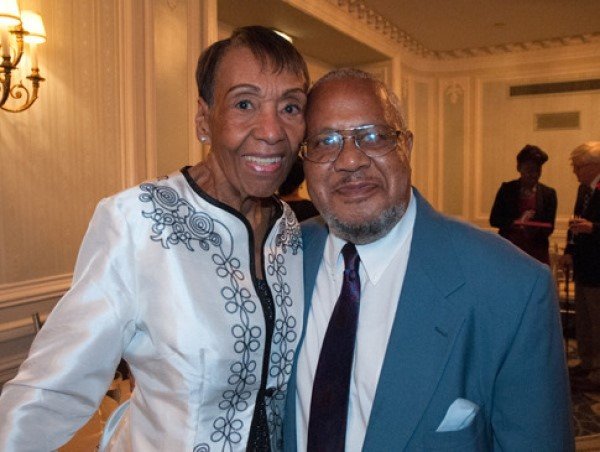 Irma and Willie Pickens at the Jazz Institute of Chicago Gala in 2013. 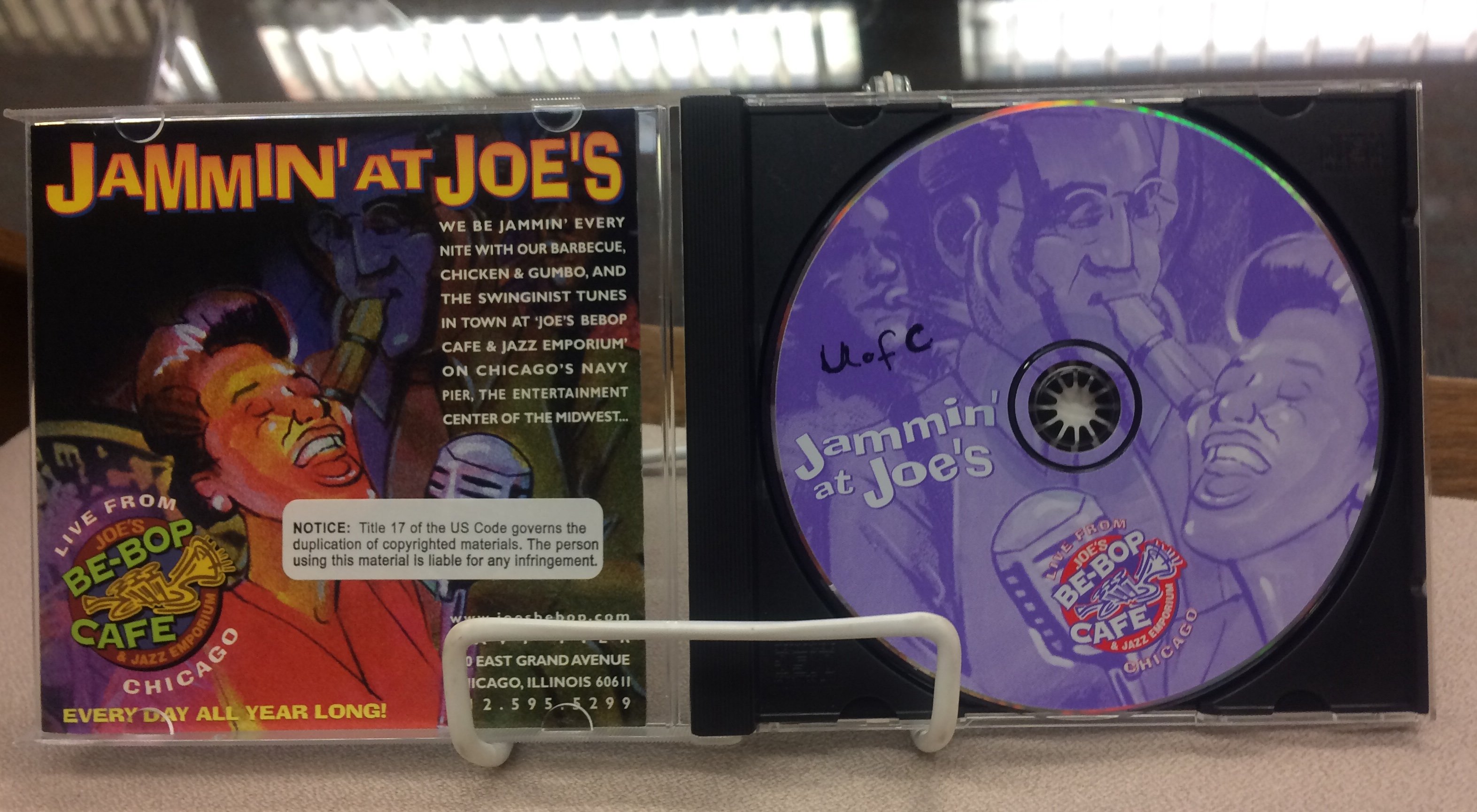 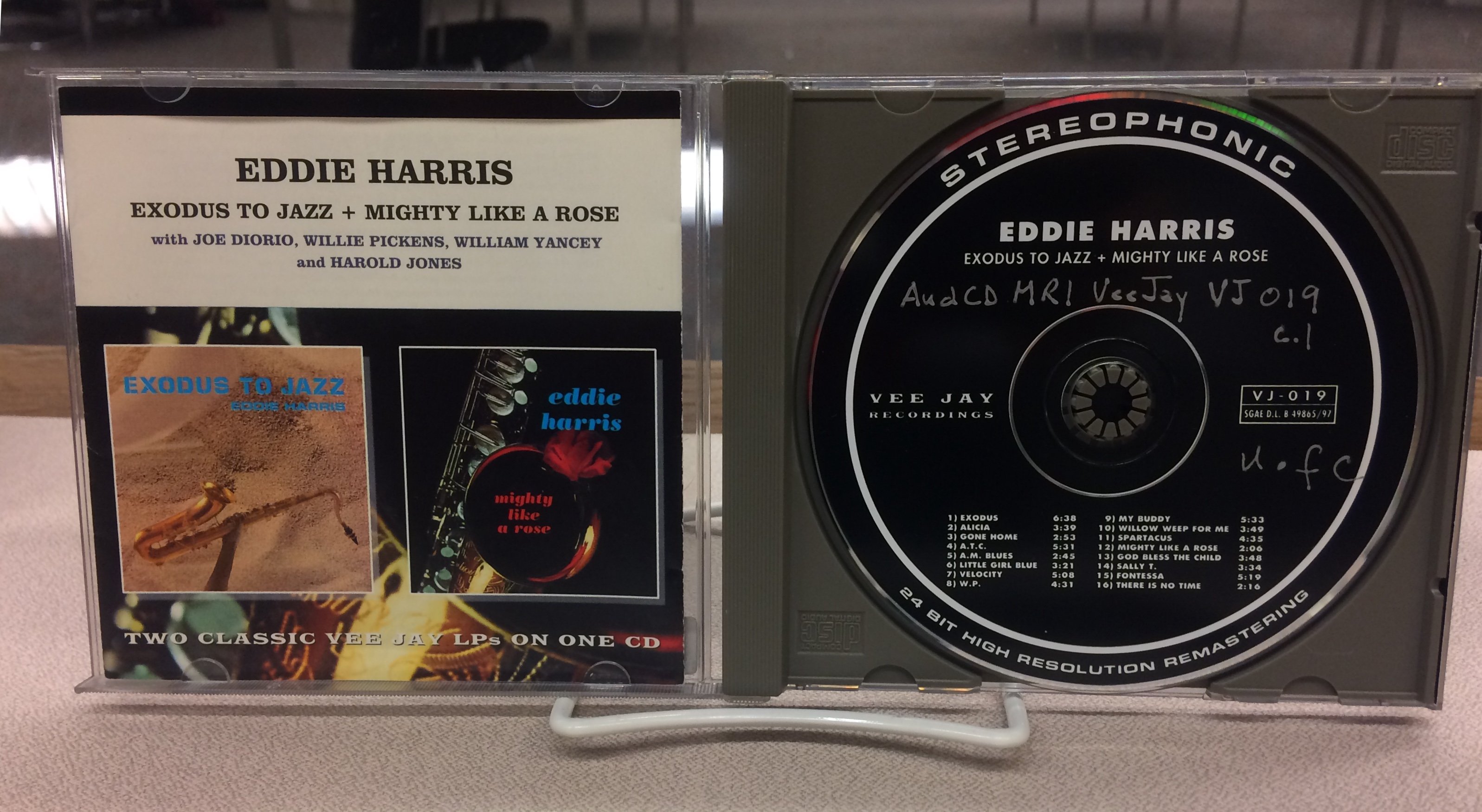 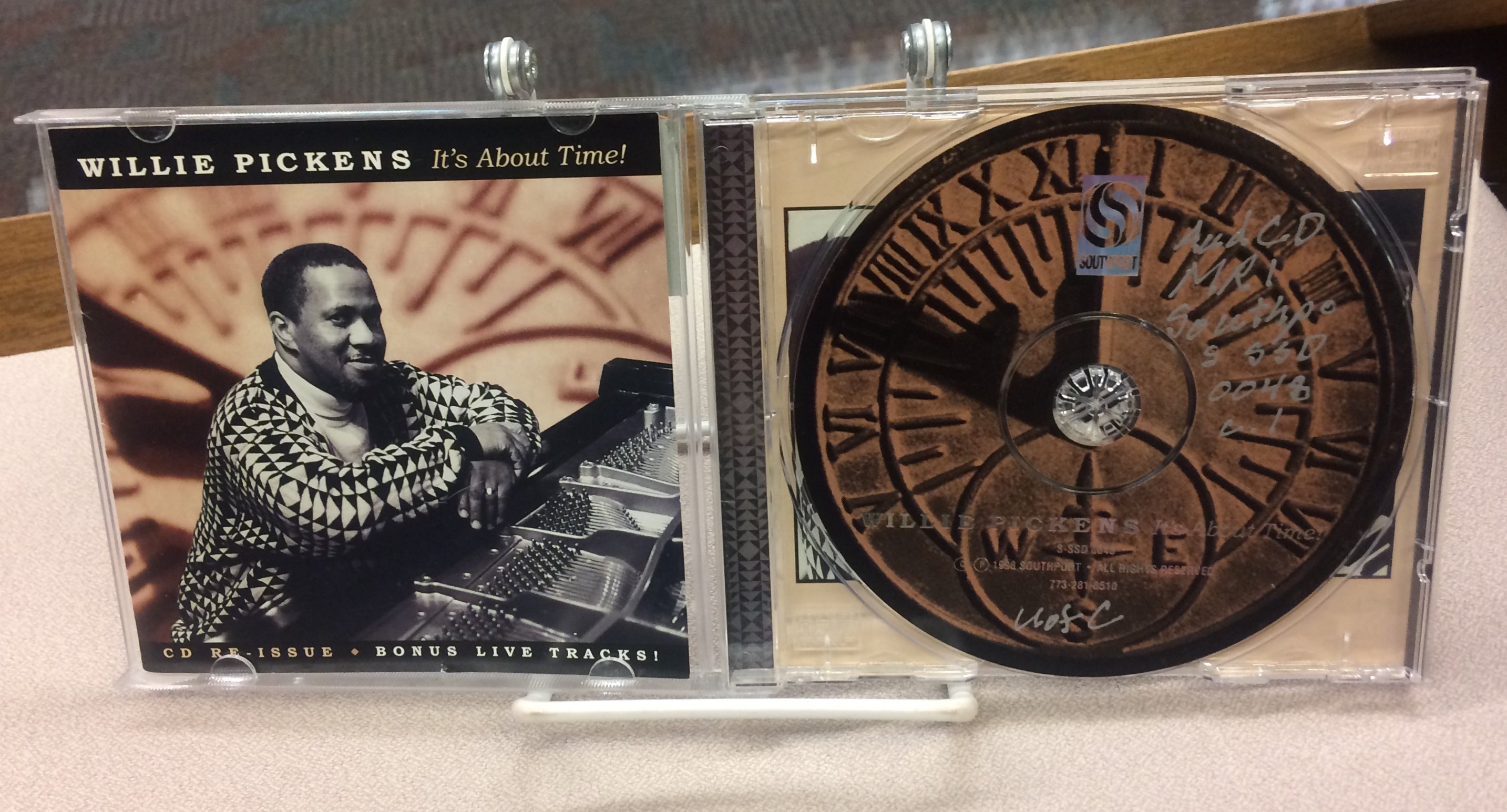 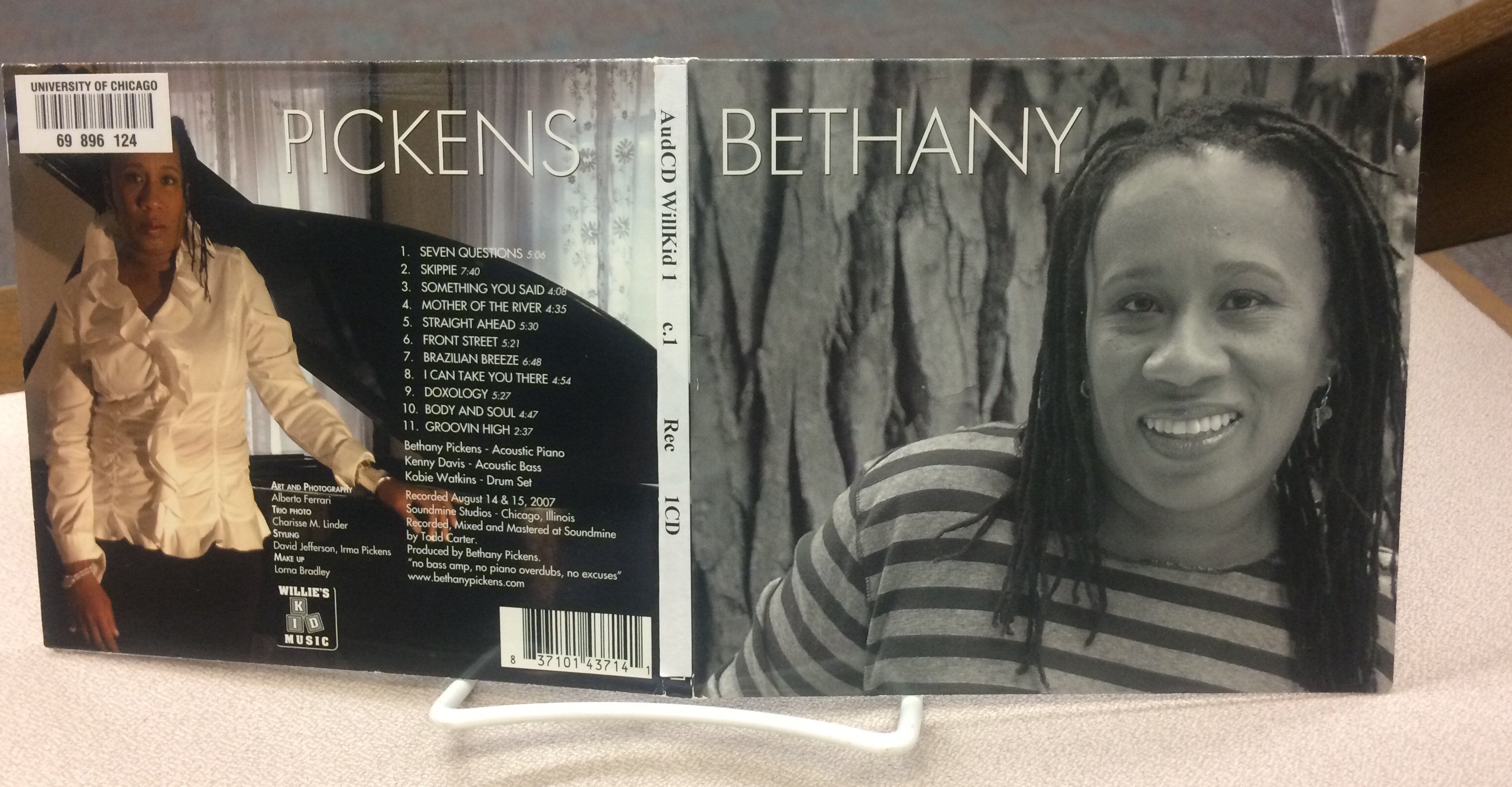 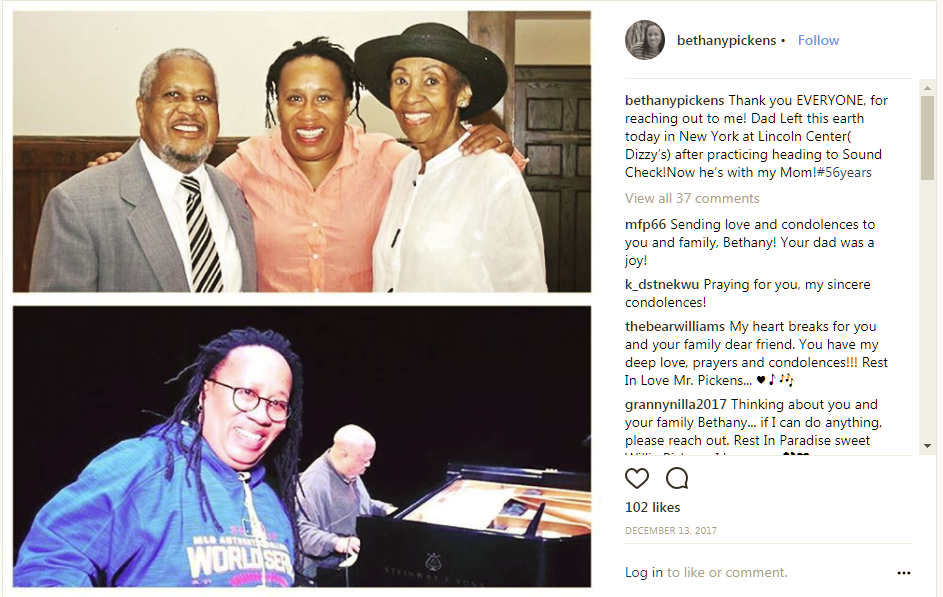