Brewing developed as an art practiced by skilled artisans over the course of centuries. Brewers developed their recipes and practices by trial and error, and without complete understanding any of the specifics of the chemical and physical processes that transformed barley and hops into beer. The science of brewing started in 1680 with Antonie van Leeuvenhoek who observed yeast cells in a drop of beer through his microscope. By the 1830's there were different schools of thought about the yeast organism. Charles Cagnaird La Tour, Theodor Schwann and Friedrich Kutzing reported that yeast was a living animal that could bud. Other eminent scientists, including Justus von Liebig and Friedrich Wöhler, did not believe that yeast were living organisms at all. Subsequently, Louis Pasteur undertook a study on beer fermentation at the request of French brewers in Lille who wanted to know why their beer was going sour. Pasteur demonstrated that airborne organisms infected the beer and could be inactivated by heating the beer (a common practice today known as "pasteurization"). Other studies later showed that bacteria were not the only cause of improper fermentation. In 1883, Emil Christian Hansen developed a method to purify yeast into a single desirable strain, eliminating so-called "wild yeasts." Brewers continued to turn to scientists to improve malting and brewing technology. In addition, beer analysis matured into an accepted science, assuring quality control and improving shelf-life. In recent years, biomedical science has also turned to beer as a potential source of biologically active compounds for drug discovery. Hops used in traditional beers contain a wide variety of phenolic compounds, which have antioxidant properties that show some promise as cancer chemopreventive agents. In addition to essential oils from hops, beer contains other beneficial substances. Analyses of beer indicate that yeasts enrich the beer with B-vitamins. Beers made with waters from natural springs may contain nutritionally important minerals. Traditionally brewed beers also contain significant amounts of amino acids, proteins, and carbohydrates. 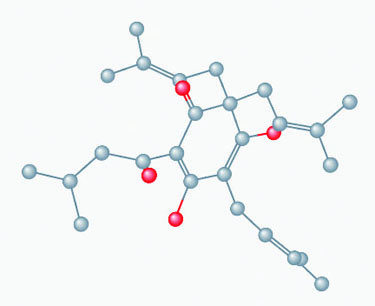 Chemical structure of lupulone molecule, a component of hops