The Library is online—we’re here and ready to help you. Learn more about our online services. All Library buildings are currently closed due to the COVID-19 emergency.

The production of almost all beer depends on a single celled fungus, brewer's yeast (Saccharomyces cerevisiae). Recent genetic analyses of this simple organism show that at about 80 million years ago, this yeast underwent significant genetic changes that set it apart from other yeasts. S. cerevisiae's genetic code gives it the ability to turn off its aerobic respiration pathway, i.e., to convert sugar to ethanol even when oxygen is present. Much of the work to elucidate the yeast genome was done by John Aris at University of Florida in Gainesville (Thomson, J. Michael; Gaucher, Eric A.; Burgan, Michelle F.; De Kee, Danny W.; Li, Tang; Aris, John P.; Benner, Steven A. "Resurrecting ancestral alcohol dehydrogenases from yeast," Nature Genetics (2005), 37(6): 630-635.) 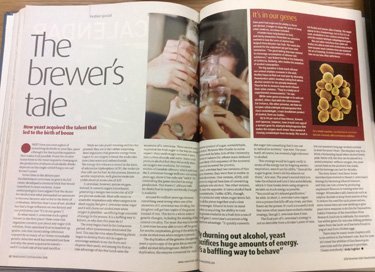