Beer and the brewer's arts and technology were featured in the Agricultural Building at the World's Columbian Exposition of 1893. Only two independent Chicago brewers were represented: Cooke Brewing Company and North-Western. Both companies won awards for their beers. Better represented were companies who provided equipment to the brewing industry, including the Geo. A. Weiss Malting & Elevator Company, Chicago Automatic Scale Company, Liquid Carbonic, the American Copper, Brass and Ironworks Company, and the Fred Wolf Company (Linde machines). 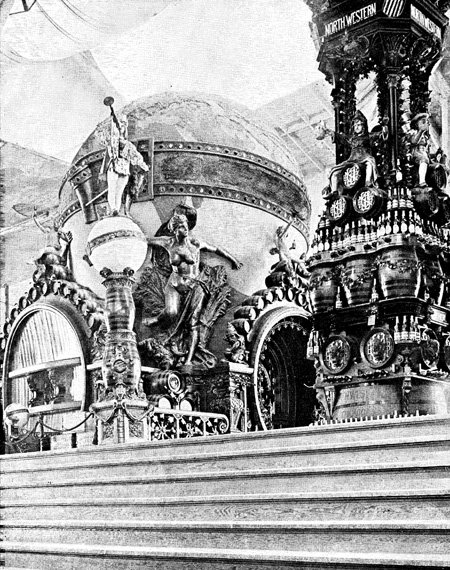 Exhibit of the North-Western Brewing Company

From: Bancroft, Hubert Howe. The Book of the Fair; an Historical and Descriptive Presentation of the World's Science, Art, and Industry, as Viewed Through the Columbian exposition at Chicago in 1893, The Bancroft Company, Chicago, 1895. Crerar fT500.C1B2 (digital version produced by IIT)

Among the displays in the Agricultural Building at the World's Columbian Exposition of 1893 was the North-Western Brewing Company's exhibit. North-Western was founded in 1888, and in 1898 was incorporated, along with 12 additional breweries, into the United Breweries Company of Chicago