Chicago was home to professional brewer's organizations, conferences and publications. The earliest organizations were the Brewers Association of St. Louis and East St. Louis (1879), Chicago and Milwaukee Brewers Association (1881), and the Illinois State Brewers Association (1898). The Seventh Convention of the United States Brewers Association was held in Chicago in 1867. The Master Brewers Association was headquartered in Chicago, and its first convention was held here in 1887, where it was decided to conduct the proceedings in German. The Western Brewer (1), begun in Chicago in 1876, was the longest continually published brewery journal. Between the many brewing industry advertisements, one could find barley and hops market reports, editorials, obituaries, classifieds, "miscellaneous articles and brewery intelligence," and the United Brewmasters' Association Annual Convention Proceedings. The journal underwent several name changes, including The Beverage Journal during the Prohibition years, and later, the Brewers Journal, the name under which, in 1960, it ceased. Der Braumeister (2), published in Chicago beginning in 1887, soon changed its name to American Brewers' Review. It was published in German until 1900, in both English and German until 1917, and English only until it ceased in 1939. Another Chicago publication, The Brewers Digest, ran from 1937-2004.

1: Digitized versions of volumes dated 1906-1922 are available from HathiTrust catalog (e.g., v.31 1906 of The Western Brewer, digitized from the University of Chicago Library collection.) 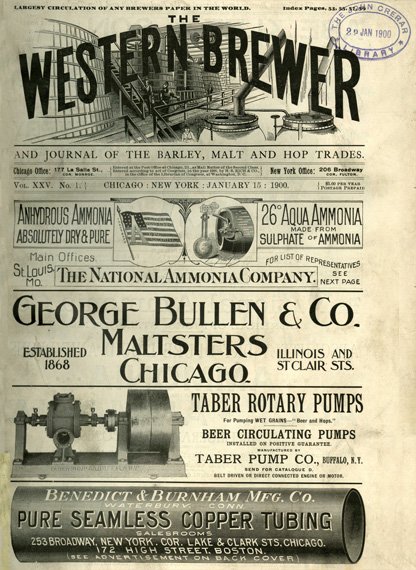 1899 cover of The Western Brewer

The Western Brewer experienced several name changes during its publication from 1876 to 1960. From top to bottom: 1899 cover of The Western Brewer. 1926 cover of The Beverage Journal, the Prohibition era name (1920-1932). 1955 cover of the Brewers Journal featuring a "new packing system...combining the cost and merchandising advantages of throw-away bottling..."