Photography was a central component of Soviet image culture from its very beginning. From the experiments of the Constructivist avant-garde to Socialist Realist photo essays, photography provided new ways of seeing and documenting an entirely changed political and social reality. Avant-garde artists experimented with the capabilities of the photographic medium, defamiliarizing the everyday with extreme close-ups, as well as cutting and reassembling photographs into new collaged and montaged worlds. In particular, the artistic group Oktiabr’ (October), which included Aleksandr Rodchenko, was a dominant voice in the sphere of early Soviet photography. The October group stressed a formal approach to photography: the striking close-up, diagonal composition, or shooting sharply from above or below the subject.

Elements of this aesthetic were utilized by V. Griuntal’, a member of the October group, in the children’s book Chto eto takoe? (What is this?), which transforms defamiliarization into a game for the child reader. In the first half of the work, Griuntal’’s snimki-zagadki (“snapshot-puzzles”) ask the reader to guess at what is being pictured in black-and-white photographs and, at the same time, to solve a seemingly unrelated arithmetic problem. The answers to these visual and arithmetic puzzles are revealed in the latter half of the book. Objects which initially were shot from unexpected angles or shown in an unrecognizable close-up (such as a tea kettle shot from above) are revealed from a more familiar angle in the second half of the book. Here the photographed object and the solution to the mathematical problem are re-familiarized as a complete picture of a recognizable object from everyday life.

A similar style is also found in I. Rein’s Kak ustroen traktor (How a Tractor is Built).  The book utilizes the close-ups of machine parts characteristic of the October group's style. It leads the young reader through the powerful workings of a tractor, inside and out, while answering practical questions such as “How does a tractor move through difficult terrain?” and “Where is the heart of the tractor?” Here the close-ups of tractor parts are employed in a practical way to teach about the inner workings of a machine, while also adding an engaging dynamism to a utilitarian subject.

In contrast with the October group’s formalistic approach to the photographic subject, others – mainly photojournalists – focused primarily on conveying ideological information.

Max Alpert’s and Arkadii Shaikhet’s photo essays and montages were frequently published in such large format magazines as SSSR na stroike (USSR in Construction) which was published in Russian and circulated abroad in English, French, and German. An example is Alpert’s “The Giant and the Builder”) a photo essay documenting a few years in the life of the young model worker Viktor Kalmykov as he works in the rapidly industrializing model city Magnitogorsk (Magnet-Mountain) during Stalin’s First Five-Year Plan. A similar style of photomontage is presented on the cover of the children’s book Magnitogorsk by N. Mislavskii. This work, much like USSR in Construction, utilizes photomontage to create an engaging ideological space for the viewer.  Here the sparks of metalworking and a man in red tones overlay the steel mill in the background, combining two photographs with hand-drawn sparks.  The exciting image of a major construction project of Stalin’s First Five-Year Plan frames the story of the construction of this industrial city, Magnitogorsk. The montage opens the book, thereby opening the imagination of the child, while the narrative and subsequent documentary photography ground the reader’s progression through the construction of Magnitogorsk.

While looking at the first illustration of a woman with a kind of divining rod, the reader is invited by the text to guess at what she is doing. “Is she fishing?” – No.  The text informs the reader that this rod detects hidden metals below the ground.  Here less is left for the reader to divine, as the answers are complete in narrative text and straightforward images.  As the photomontage on the cover presents in visual form, and is reiterated throughout the text, objects are not the focus of Socialist Realism as they might be in the forms of the avant-garde. Instead it is the people who build and who wield those objects that are most important as they work to build the new society. The excitement is not in the puzzle, but in the sparks of construction. 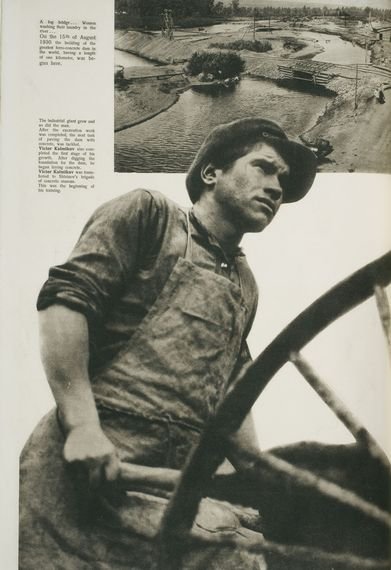 The Giant and the Builder 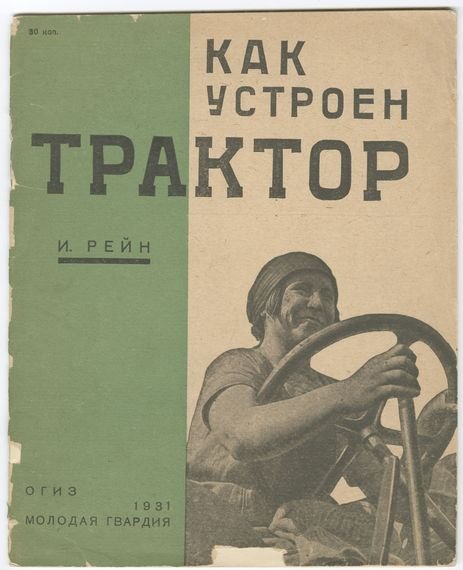 Kak ustroen traktor (How a Tractor is Built) 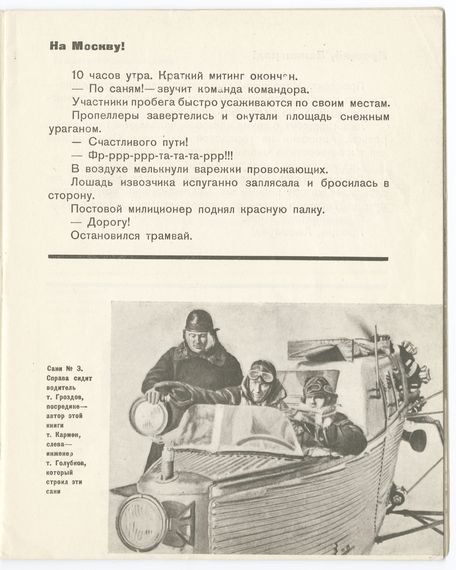