The Technology of Candy Making

Beginning in the 1840s, machinery technology allowed candy to be made on a larger scale. Revolving steam pans and lozenge machines were some of the first innovations. In 1855, two Chicago brothers founded the Savage Brothers Company. Starting with wood burning and coal fired candy stoves they designed and fabricated machinery specifically for the candymaker. Year-by-year new improvements and inventions were made until steam and coal were eventually replaced by gas and electric and the making of confectionery machinery became its own industry.

By the late 1800s, lower prices for ingredients such as sugar, played a large part in the growth of the industry. Cheaper sugar made candymaking very profitable and in turn, a wider array of confections became accessible to consumers.

Simple yet important advancements like thermometers for home use allowed for candy to be made accurately in home kitchens. As printing became less expensive, manuals and recipe books were produced to fill the demand for cookbooks and guides to candymaking. Cookbooks were no longer exclusively for the wealthy to read to their servants, who in turn would prepare facsimiles of exotic fare. Cookbooks were written with the middle class in mind and consumers who were eager to explore the art and science of candymaking in their home kitchens purchased the inexpensive books.

With the Food Act of 1906, government standards tightened, allowing quality candy to flourish and creating a public trust in packaged candy. Packaging for candy became an industry in its own right. Materials like specialty papers, cellophane, inks, foils, glassine and later plastic films became important components to help market, brand and differentiate a product. Advancements in packaging kept candy factory fresh, noticeable on a merchant's shelf and memorable in the consumers mind.

Many candy companies developed products for wartime that continued to sell in post-war America. During WWI chocolate companies sent large blocks of chocolate overseas but it became clear that GIs on the go needed meals ready-to-eat, hence the wrapped candybar was born. In the 1930s, a shell-coated confection caught the eye of Forrest Mars, Sr. when he observed Spanish soldiers eating chocolate pellets during the Spanish Civil War. The coated candies resisted melting and during War II, M&M's, packaged in long tubes, were sold exclusively to the US military. Hershey's produced a candybar the Army named "Field Ration D," it was so successful that by the end of 1945, approximately 24 million bars were being produced every week. 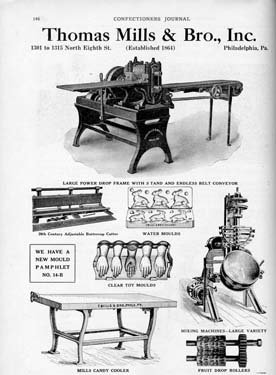