In this 1903 article written for the medical newspaper, The Lancet, W. B. O'Shaughnessy investigates unsavory candy. From its start, the Lancet's lofty mission was to instruct, reform and "counter the forces that undermine the values of medicine, be they political, social, or commercial."

At the turn of the nineteenth century, as the sale of packaged foods manufactured outside of homes rose so did the many ways to cheat consumers. Unreputable candy companies made cheap goods using sketchy ingredients and dyes, fillers and unsavory manufacturing methods. But public education combined with exposés from such writers such as Dr. O'Shaughnessy and Upton Sinclair (The Jungle) along with research by Harvey W. Wiley soon resulted in a bill that forbade the sale, manufacture or transportation of any adulterated food products, including candy.

The Pure Food and Drug Act of 1906 paved the way for the eventual creation of The Food and Drug Administration (FDA). The act states, it is unlawful, in the case of confectionery products:

If it contain terra alba, barytes, talc, chrome yellow, or other mineral Substance or poisonous color or flavor, or other ingredient deleterious or detrimental to health, or any vinous, malt or spirituous liquor or compound or narcotic drug. 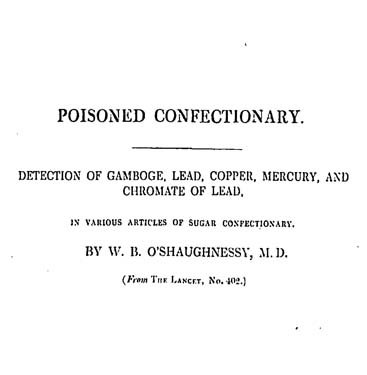