Sugar has gone from a scarce, luxury product to a "raw material" and a ubiquitous ingredient. As refined sugar became more accessible, it became widely used in confections like candy, ice cream, and pastries. Through sugar, confections have made their way into many aspects of American culture: our holidays, celebrations and pastimes.

Originally used by men in exotic "new world" drinks like coffee and cocoa, sugar signified position, class and status. Eventually sugar became acceptable for women; its use became associated with sweetness, femininity and women's consumer appetites. This book provides a historical account of the transformation of sugar within American food in the nineteenth century. 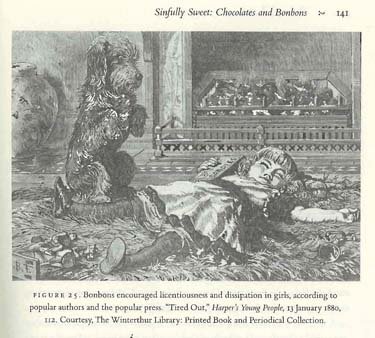 Drawing of Little Girl with Candies