London Defiant, The Genius of Place, and Genius London

As the Reformation polarized Europe along religious lines, England remained uncomfortably in the middle, wary of and alienated from both the Roman Church and continental Protestantisms. London, as the political and religious capital of England, was on guard against dangerous influences – mostly “Popish” – at home and abroad. The documents in this case illustrate Londoners’ responses to felt tensions with Luther, with the Pope, with Rome, with neighboring France, and with London’s even closer neighbors, the denizens of the English countryside. A formative moment in the process of English isolation appears in Henry VIII’s withering response to a 1525 letter from Luther, containing material which Henry would later use to refute his own earlier Catholic writings and to define his own position as the head of the new Church of England.  The three pamphlets in this case arose in the context of the so-called “Popish Plot” (1678-c.1685). Titus Oates – a born Baptist and former Anglican preacher who had converted to Catholicism, been expelled from Catholic seminaries in Spain and France, and stolen sacramental wafers which he used to seal his letters – fabricated a Jesuit plot to assassinate King Charles II and place his Catholic brother James on the throne. The ensuing hysteria claimed around thirty-five Catholic lives; even after Oates’s deception was exposed, Catholic conspiracy theories abounded. These diverse creative reactions to the exaggerated fear of Catholic insurrection in late seventeenth-century London show how religious tension itself became a tool for the exploration of London’s other tensions, geographic, economic, and political.

Michael Drayton (1563-1631) wrote epic, pastoral, satirical, and historical poetry, plays in verse, also religious poetry, some of which was banned and destroyed by the Archbishop of Canterbury.  Drayton was a court favorite of Queen Elizabeth, but rejected by her successor James I.  In 1610 he published the first section of his massive 15,000 line Poly-Olbion, whose verses survey the topography, history, natural history, and legends of Britain’s many counties. While Drayton invoked a Muse to inform his work (“Thou Genius of the place”), he published his poem with annotations by a scholar who cast doubt on the suitability of genii loci to scholarly enterprises. As an artifact, Poly-Olbion embodies early seventeenth-century England’s tensions concerning the proper sources of knowledge. It also captures tensions about the sites it describes, departing from contemporary pastoral conventions by praising, not just the spirit of rural locales, but also the genius of cities, above all “Great London.” Drayton celebrated London as a great source of wealth to England, though he deplored the squandering of this wealth by idle gentry,

...whose disproportion drawes
The publique wealth so drie, and only is the cause
Our gold goes out so fast, for foolish foraine things,
Which upstart Gentry still into our Country brings.

Drayton condemned England’s dependence on foreign luxuries popular with the gentry, like silk and tobacco (“trash… of which we nere had need”), to the neglect of domestic products (“our Tinne, our Leather, Corne, and Wooll”). This polemical digression synthesizes tensions between urban and rural, public and private, foreign and domestic. 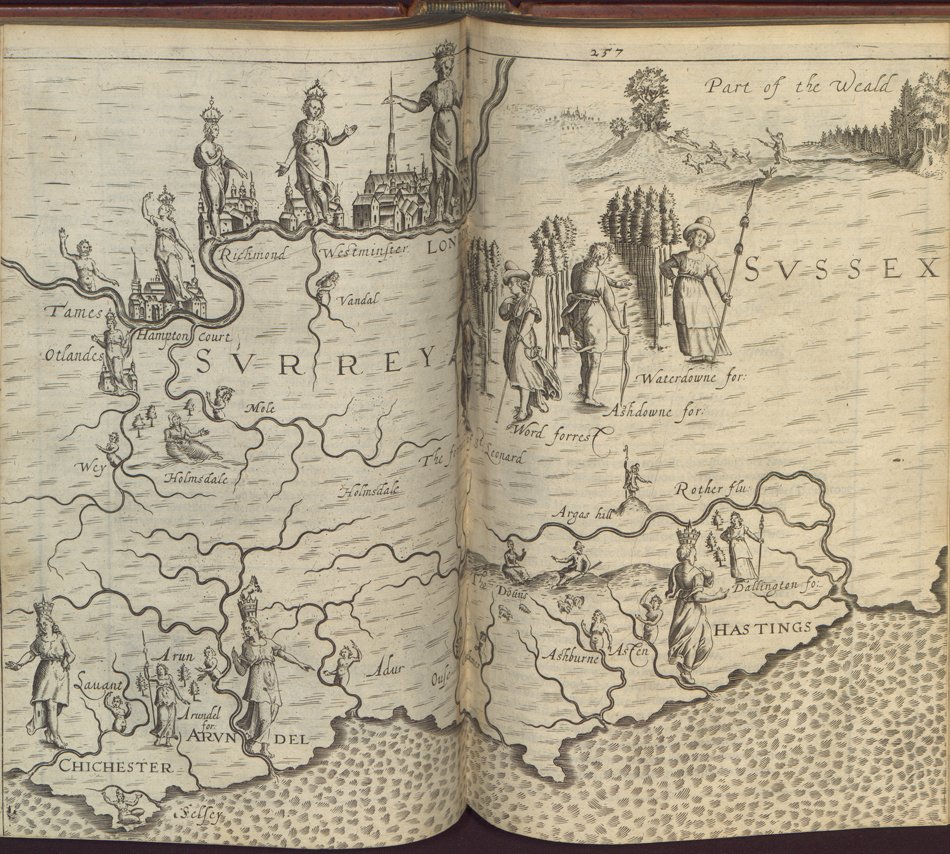 Poly-Olbion, or A Chorographicall Description of Tracts, Riuers, Mountaines, Forests…

The Genius of London – Caryn O’Connell

Where does new knowledge come from? Many seventeenth-century Londoners would answer: “London.” In his 1603 Survey of London, John Stow declared that “learninges of all sortes . . . doe flourish onely in peopled towns.” For Francis Bacon, the “learnings” flourishing most were the “vulgar” mechanical arts, yet, against the grain, Bacon argued that these arts were a source of knowledge of causes, i.e. theoretical science. Bacon’s affirmation of the intellectual fertility of urban spaces fostered a groundswell of activity in London, central to the emergence of experimental science. This in turn generated vehement tensions about knowledge’s sites and sources. Some disagreements concerned social distinction, contrasting the knowledge generated by vulgar and gentle classes, and places. Other tensions relate to two classical terms, both related to the modern concept of genius: ingenium and genius loci.  Ingenium held a range of meanings in the Renaissance, from ingenuity, to innate mental ability, learned skill, mastery of an art, or an “ingenious” made thing, such as a clever instrument. Genius loci, or “genius of the place,” referred to a spirit which watched over and characterized a locale. For poets, the genius of a place could double as a Muse stoking imaginative thought, whose inspiration could generate valid knowledge about the world. Volatile forms of ingenium demonstrated in these seventeenth-century artifacts show how practitioners framed knowledge production in terms of the material and immaterial, the place-bound and placeless, offering competing and complementary accounts of what made London so “flourishing” and so genius.