Forty-feet below the streets of downtown Chicago exist tunnels that once carried freight on a narrow two foot electric railroad. The tunnels were constructed in 1900, and service began in 1906. By the 1930's however freight was also being delivered above ground by motor trucks – which in the end proved to be more efficient then the underground freight tunnels. The tunnels were abandoned in 1959. In 1992 a section of the tunnel was punctured, causing flooding throughout the tunnel system, as well as 24 downtown buildings. Today, the tunnels are unused, except for a few sections, which carry utility and communication lines.

A network of freight tunnels under most downtown streets once carried freight from railroad terminals, packages from department stores, coal to Loop office buildings, and ash and excavation spoil to fill in the lakefront.

In 1899, an independent telephone company was given a franchise to lay telephone cables under downtown streets. Whether it was the company's original intent, or a later inspiration, construction began in 1900 of tunnels large enough to carry a narrow-gauge (two-foot) electric railroad. Freight service began in 1906, and the approximately 60-mile network was largely complete by 1909. Shipments arriving at railroad freight houses were reloaded on the small tunnel cars, which were lowered by elevators to the tunnels and towed to their destinations. Tunnel trains carried coal to basement boiler rooms and carried ash away for disposal.

By the 1930s, motor trucks proved more efficient than the freight tunnels. Subway tunnels constructed in 1939 at the same level cut off important parts of the network, and Loop buildings shifted to coal delivery by truck and then to natural gas. The freight tunnels were abandoned in July 1959.

Today, some sections of the tunnels are used for utility and communication lines. In April 1992, one of the tunnels under the Chicago River near Kinzie Street was punctured, flooding most of the system and two dozen downtown buildings with open tunnel connections. 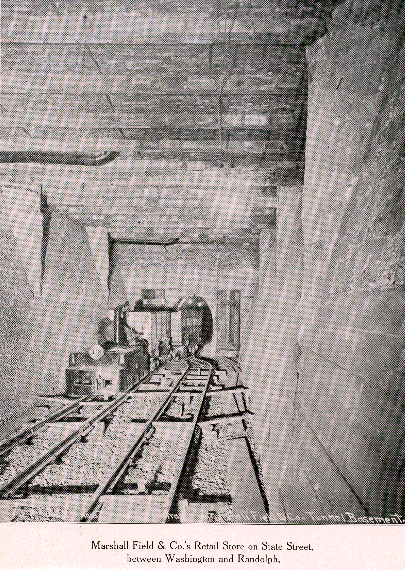