The collection includes neither a portrait nor a photograph of William Howard Taft, but the Library of Congress has a print of an etching of him by Albert Rosenthal in the style of the other portraits included in the collection: 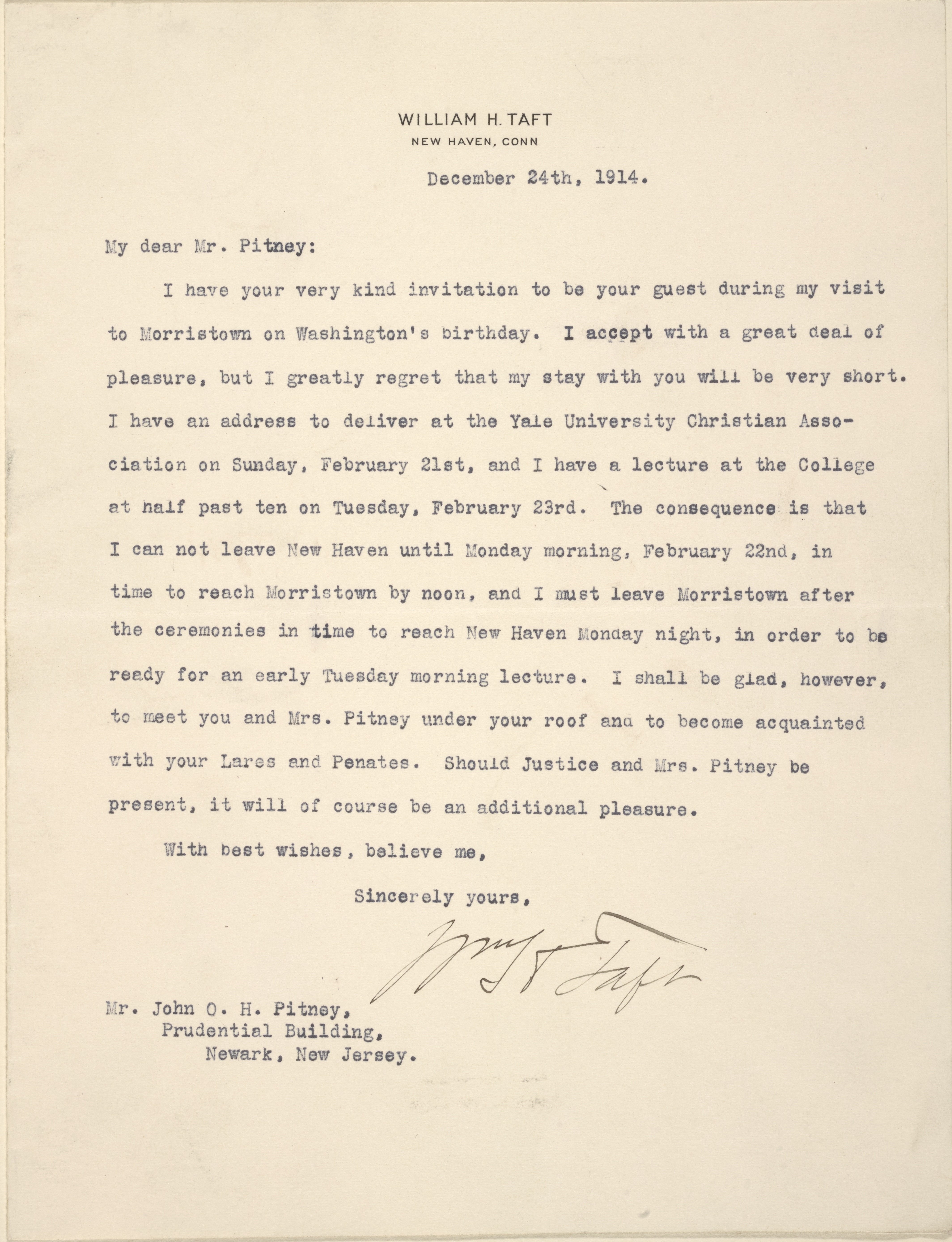 I have your very kind invitation to be your guest during my visit to Morristown on Washington's birthday. I accept with a great deal of pleasure, but I greatly regret that my stay with you will be very short. I have an address to deliver at the Yale University Christian Association on Sunday, February 21st, and I have a lecture at the College at half past ten on Tuesday, February 23rd. The consequence is that I can not leave New Haven until Monday morning, February 22nd, in time to reach Morristown by noon, and I must leave Morristown after the ceremonies in time to reach New Haven Monday night, in order to be ready for an early Tuesday morning lecture. I shall be glad, however, to meet you and Mrs. Pitney under your rood and to become acquainted with your Lares and Penates. Should Justice and Mrs. Pitney be present, it will of course be an additional pleasure.

With best wishes, believe me, 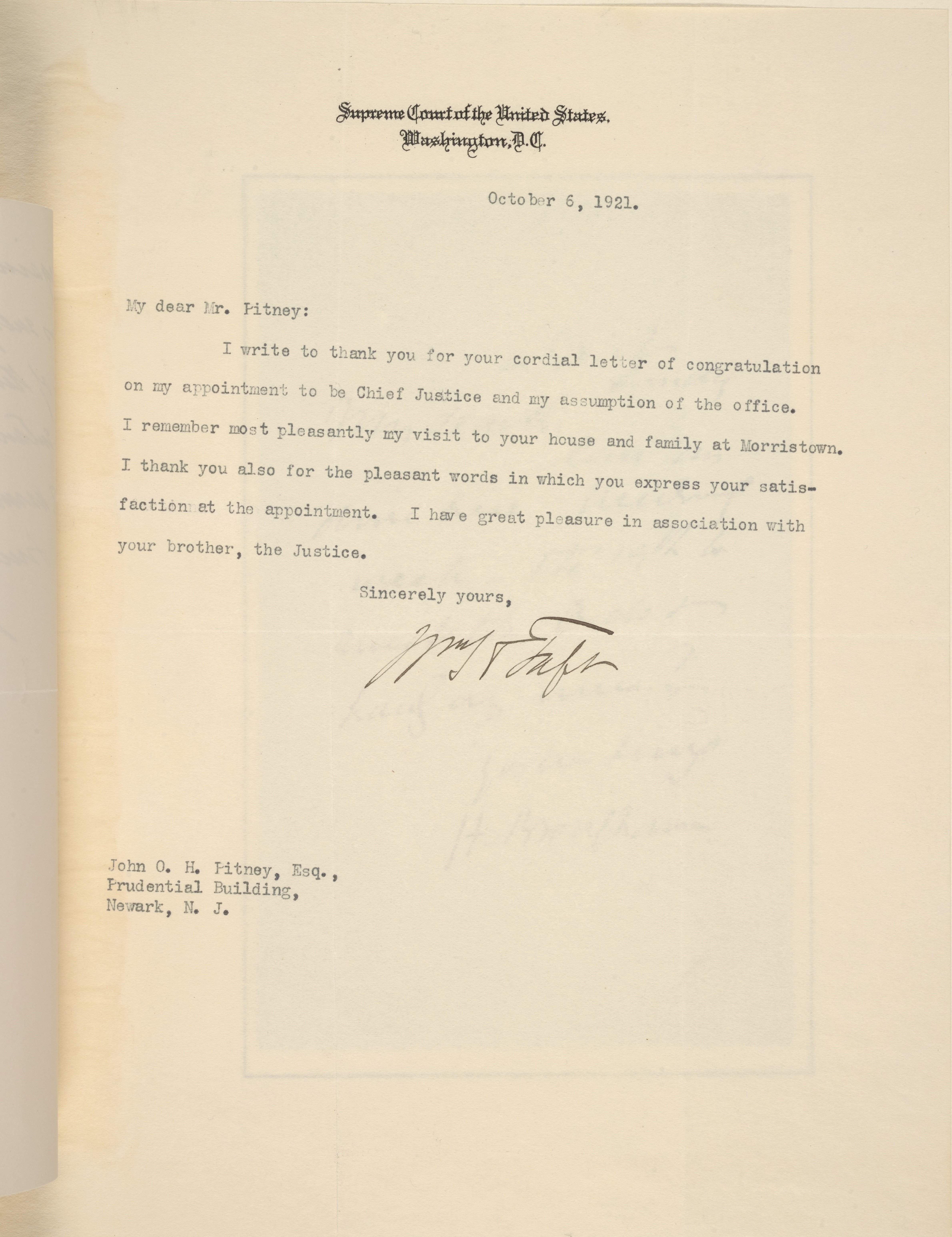 I write to thank you for your cordial letter of congratulation on my appointment to be Chief Justice and my assumption of the office. I remember most pleasantly my visit to your house and family at Morristown. I thank you also for the pleasant words in which you express your satisfaction at the appointment. I have great pleasure in association with your brother, the Justice. 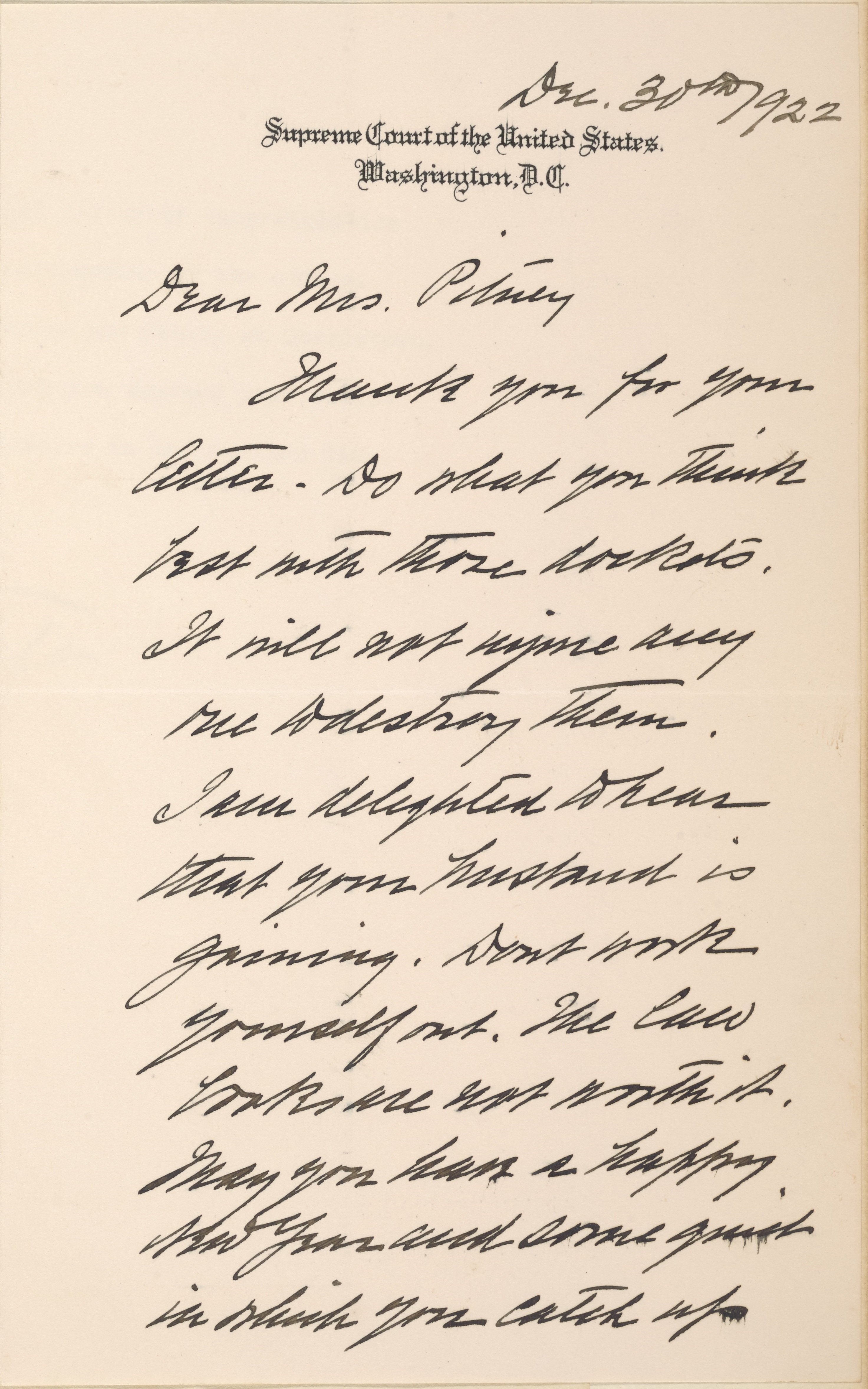 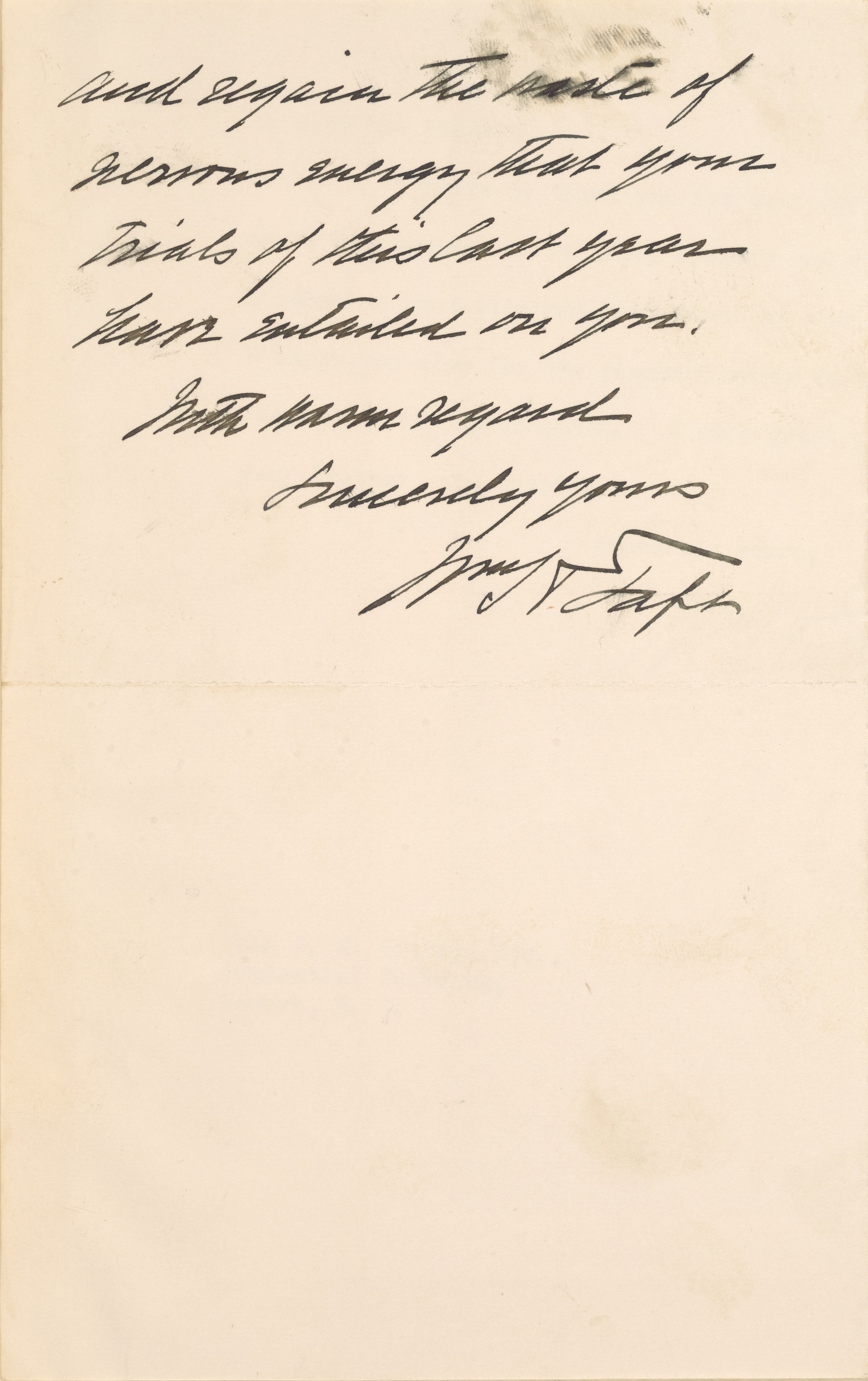 Thank you for your letter. Do what you think best with those dockets. It will not injure any one to destroy them. I am delighted to hear that your husband is gaining. Don't work yourself out. The law books are not worth it. May you have a happy New Year and some quiet in which you catch up and regain the [waste] of nervous energy that your trials of this last year have entailed on you.

About the Taft Court

As he indicates in his letter, William Howard Taft was nominated to the U.S. Supreme Court in 1921. President Warren G. Harding nominated him to the position of Chief Justice. On the Court, he served with two of the Justices that he had nominated when he was President of the United States: Mahlon Pitney and Willis Van Devanter.

For more about the Taft Court, see:

The day after Chief Justice Taft sent this letter to Justice Pitney's wife, Florence Pitney, Justice Pitney resigned from the Court. Earlier that year, in the fall of 1922, he had suffered a stroke. Pitney was nominated to the Supreme Court by [then] President Taft in 1912. Before his service on the Court, Pitney had an active legal and political career in New Jersey.

William Howard Taft's legal career began in Ohio, where he was an assistant prosecutor and then in private practice. He had an impressive career in law and politics, serving as the Solicitor general of the United States from 1890 to 1892, a judge on the U.S. Circuit Courts for the Sixth Circuit and the U.S. Court of Appeals for the Sixth Circuit from 1892 to 1900, Secretary of War under President Theodore Roosevelt from 1904 to 1908, and President of the United States from 1909 to 1913 before his nomination to the U.S. Supreme Court.

For more about William Howard Taft's life and career, see: