The Maroon and Cap and Gown

For the first decade of the University's history, the student newspaper was the University of Chicago Weekly, a news and literary publication founded in October 1892. The Weekly dominated the campus news scene, printing as many as 15,000 copies of its Thanksgiving issue. A competitor, the University News, was created on October 17, 1892, just days after the Weekly had been established, but it barely outlasted the winter chill, expiring on April 19 of the next year.

In May 1895, a group of students adopted the name of the school color for their new paper, but the Maroon also failed to last for a year. A second attempt to establish the Maroon, this time as a daily, began on May 7, 1900. But just days after its rebirth, the Daily Maroon was criticized for hastily publishing the story of a scandal which turned out to be a hoax. The incident led to the paper's demise the next month, but the students were committed to creating a publication that produced "a common feeling of University solidarity."

Finally on October 1, 1902, in yet another comeback, the Daily Maroon began its successful drive at overtaking the Weekly, which ceased publication in 1907. The Daily Maroon had several competitive advantages. Unlike the Weekly, it was operated entirely by students, it was strictly a newspaper and not a literary publication, and it was a daily, which ensured that its stories would be current.

By 1906, the Daily Maroon began delivering copies each morning or "before breakfast" as the staff boasted. The quality and accessibility of the paper led to a 300 percent increase in subscription rates from 1906 to 1907. In the decades following this quick rise to prominence, the Daily Maroon added feature columns like "Literary Leaders" by John Gunther (PhB 1922), which drew the acclaim of faculty members and even journalist H. L. Mencken. The Maroon staff attracted generations of talented students, some of whom went on to notable careers: editor John Barden (AB 1935, JD 1938), historian William McNeill (AB 1938, AM 1939), author and editor Emmett Dedmon (AB 1939), and broadcasting executive Ernest Leiser (AB 1941), among many others.

With the onset of World War Il, the Daily Maroon could not maintain the staff necessary for a daily newspaper. Even after merging staffs with Pulse, the last remaining student magazine, the Maroon was forced to drop its daily formal for the biweekly schedule it still retains. 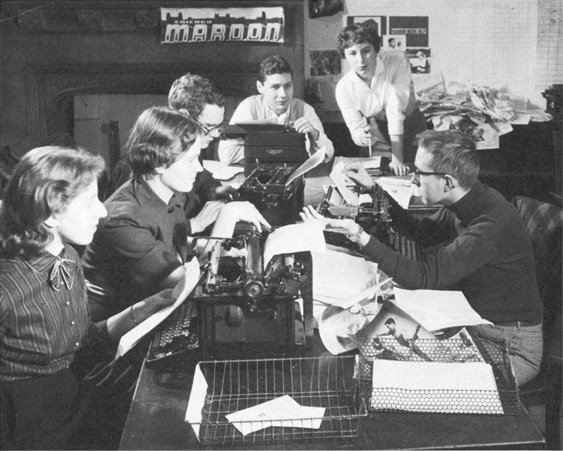