James Henry Breasted was one of the most widely known members of the University of Chicago faculty, a popularizer and textbook writer as well as America's first teacher of Egyptology. His field of work also captured the attention of religious-minded philanthropists like John D. Rockefeller, Jr., who were intent upon learning more about the ancient Near East. Working when serious professional archaeology was in its infancy and unconstrained by many governmental restrictions, Breasted's discoveries and purchases of artifacts helped shape the American image of past civilizations. His travels in the Near East evoked romantic images of Arab sheiks, ancient lost cities, tribal warfare, and buried treasure of the sort discovered at the tomb of Tutankhamun. In the years before oil irrevocably changed Western perceptions of the ancient Fertile Crescent, few adventures stimulated popular expectations more than Breasted's archaeological explorations.

Trained in Egyptian, Greek, Hebrew, and Arabic at Yale under William Rainey Harper, and in Berlin, Breasted's interest in ancient cultures drew him first to Egypt and then to Mesopotamia. Ancient Records of Egypt, published in 1906, was a five-volume work that contained his English translation of the most important Egyptian historical texts held in Europe at that time. In addition, he conducted a pioneering epigraphic survey in Egypt during two seasons, 1905-6 and 1906-7. With the help of a photographer and an assistant, he set about recording as much as he could of the tombs and temples along the banks of the Nile. This work is recognized today as crucial to the understanding of ancient Egyptian history and culture.

Arranging for an expedition halfway around the world in 1900 was no small task. Dealing with balky porters, negotiating with foreign bureaucrats whose demands and authority were often vague, overcoming problems of weather and terrain, and surmounting the logistical difficulties of reaching inaccessible locations were some of the problems Breasted confronted on a routine basis. While in the field, he was constantly faced with shortages of funds and problems from home. To be sure, he was not helpless.

Aware of the popular interest in his work, Breasted was not averse to turning the lure of buried tombs and lost cities to his advantage. Going directly to potential donors, often without consulting University administrators, his fundraising activities were a constant point of contention. Frequently successful, if not always well loved, Breasted managed to raise the necessary funds to support his overseas expeditions as well as to help underwrite the University's Near Eastern programs on campus. Today's Oriental Institute evidences his persistence and enthusiasm and the interest he was able to cultivate in others. 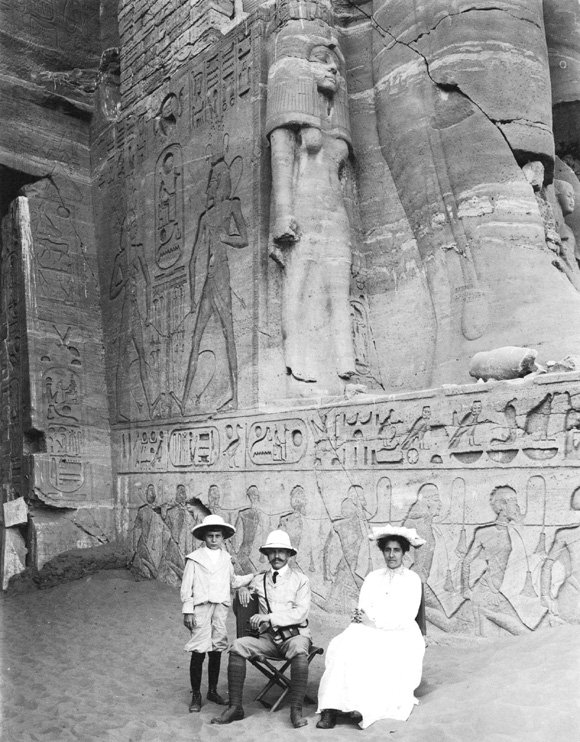 Frances Hart and James Breasted were married in Germany shortly after he completed his doctoral work at the University of Berlin. The Breasteds explored the Nile on their honeymoon and returned together with their son in 1906. Frances endured frequent and lengthy separations from her husband and tolerated his intense preoccupation with his work.